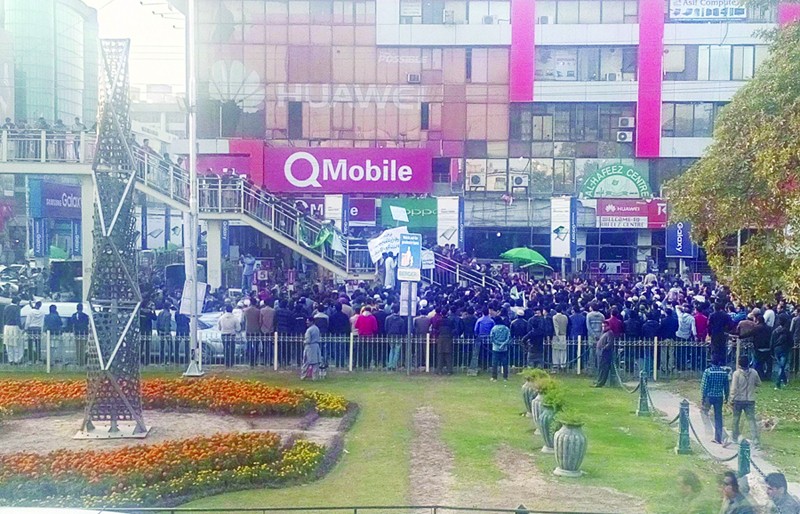 Citizens of Lahore, a few days ago, saw a disturbing sight in the heart of the country’s cultural and most advanced capital. Posters with shameful and obscenely worded sentences aimed against the Ahmadiya community were photographed and uploaded on social media networks. These posters had in fact been put up at entrances of shops selling mobile phones and other technology gadgets in arguably the entire province’s largest and most extensive IT market, Hafeez Centre and barred Ahmadis from entering or conducting any business in any of these shops.

Appalled by these posters targeting an already marginalised religious community in Pakistan, a considerable relief and happiness was felt over the actions of the Punjab police that took off the said posters (though previously up for years). This, however, was not the end of the matter. In the subsequent days, not only were these derogatory notice signs reposted by shopkeepers of the Hafeez Centre but when the police arrested two people, the situation took a bizarre turn.

Traders of the Hafeez Centre rallied together to stage a big protest against the police and the government because they were being stopped from posting these signs and continuing their previous practice of exclusion. Holding large printed banners, hundreds of protesters later successfully blocked the city’s major boulevard for several hours.

Pakistan as a country still wrestles with a great existential crisis. With a decade long practice of systematic disenfranchisement of minority communities, it is now rather hard for the state to control religio-politically motivated stances after the military establishment has finally decided to end the good Taliban and bad Taliban dichotomy. Though it might be a step too far in identifying common citizens of Hafeez Centre with terrorists, one does wonder where a line is to be drawn with people actively engaging in hate crimes. Sympathising voices for extreme views have obviously been well-entrenched in our civil and political system.

With the first year anniversary of the tragic Army Public School attack only three days after the Hafeez Centre hate crime arrests, it is sad to note that the alleged perpetrator when released on bail of Rs50,000 had numerous shopkeepers and the like coming to garland the man with red roses. This experience poignantly reminds us of the time Mumtaz Qadri, the murderer of Salmaan Taseer, was also garlanded with red roses.

What is important to note about these supporters and active enthusiasts for hate speech and action is that they don’t look like the evil looking shadow monster villains like in the comic series made in honour of the young Aitzaz Hasan who died preventing a suicide bomb attack at a school. These are regular everyday people we greet, engage and buy goods from. They are fathers, brothers, sons and husbands like us. Like the millions of other Pakistani citizens, they work at offices, banks, stores and even at shops selling the latest technology gadgets Lahoris and the rest like to get their hands on. Sadly, these people are ones who have certainly fallen through the cracks entertaining narratives of exclusion.

As the state works to implement the National Action Plan, let us also strive enthusiastically to take time out and engage with people not in far flung mountain hideouts but ones we meet every day. Friendship and wise engagement with those who casually entertain hate speech and actions which stigmatises groups is crucial. An outsider cannot do a better and timely job than a friend, cousin or brother. It is not only the Muslim hate crime victims of the West who need our belligerent support in this hour but our fellow citizens with a different religious position from across the street.