Nothing’s too sacrosanct to escape his comic lens 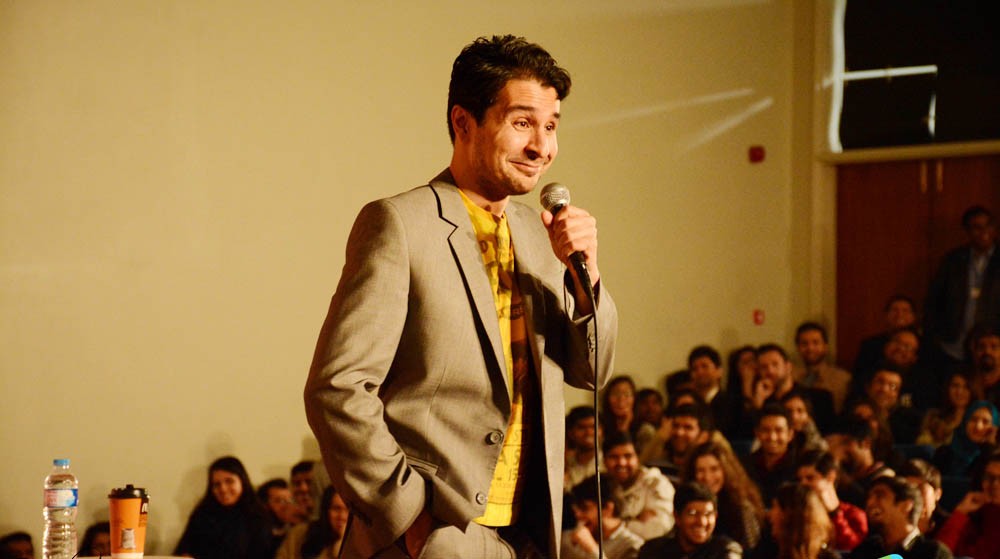 If you missed Saad Haroon’s stand-up act in Lahore this past weekend, seriously, don’t jealous jaani. Voted the 2nd funniest person in the world, in a Laugh Factory competition last year, Haroon is currently touring Pakistan and making audiences holler with his latest act, ‘Don’t jealous jaani, my heart is Pakistani!’

At Lahore University of Management Sciences (LUMS), Haroon walked, or rather hip-hopped, his way on to the stage after an entertaining opening act by the talented Atif Nawaz. His energy was palpable and continued till the end of the show. Mixed with that energy was something else, an eagerness to talk about a culture and country that was as much loved by his audience as him.

Haroon opened his act with an ‘adaab’, a gesture that would simply have been a respectful nod to Pakistani culture -- until it quickly became the butt of his first joke. With that, the tone was set for the rest of the act.

There was a sense of ownership and familiarity with his subject as Haroon weaved jokes out of the everyday gestures and nuances that characterise a typical Pakistani society. In less than two hours, he smoothly captured the basic essence of ‘Pakistaniat’. From the national obsession with marriage and rishtas; the absence of the concept of personal space; the not-so-subtle curiosity of acquaintances; the country’s colonial past; to the dilemma of dating couples in Pakistan, nothing was too sacrosanct to escape the scrutiny of his comic lens.

The pivot of Haroon’s act was, without a doubt, his marriage. Though not seen by the audience, the presence of his wife loomed larger than life throughout the show. In choosing to put his private life on display in a public sphere that essentially uses ridicule to elicit laughs, Haroon set another benchmark for the Pakistani comedy scene. This was a conscious decision by the stand-up as, according to him, everyone is living the same secret life in Pakistan. In his opinion, it was time to highlight the similarity of every Pakistani’s social experiences.

As the founder of Pakistan’s first improvisational comedy troupe, Blackfish, and the creator and host of the country’s first solo English language comedy show, The Real News, Saad Haroon is well known for his satire. Irreverent is an adjective that often comes to mind where satirists are involved. Yet, at no point during his act did Haroon belittle his country or its quirky norms. There was no hesitancy as he mirthfully turned one cultural norm after the other on its head. In fact, the stand-up act came across as more of a celebration of what Haroon calls a ‘common Pakistaniat’.

The show’s title makes one wonder whether this tour is driven by an expat’s nostalgia. Haroon concedes that memory and nostalgia do provide inspiration for comedy since, as a comedian, the past and present are constantly being scrutinised.

But he is reluctant to categorise himself as an expat and says that like all artists, he is an ambassador for his country. However, as a Pakistani living abroad, it can be difficult to escape the shifting nature of Muslim/non-Muslim relations.

Though reluctantly, references to the negative stereotyping of Muslims in the western world did creep into the comic act. But Haroon was quick to not let it weigh down the crowd’s happy spirits. The depressing and dark topic of world affairs was swiftly laughed off through a transition to mocking social interactions in Pakistan.

Improvisation is definitely Haroon’s forte. It was during his rapid-fire interrogations of different people in the audience that his comic talent shone most brightly. Whether it was highlighting the prevalence of the bromance, or "launda love", or making good-natured jibes at light-skinned foreigners in the crowd, Haroon was in his element when spontaneity dictated his quips.

Effortlessness is the hallmark of a good joke. For those considering comedy as an escape from any career requiring hard work, Saad Haroon has bad news: Being a comedian is no joke and demands just as much effort as a conventional job. In some ways, a comedian has it tougher than a banker or an accountant. To make people truly laugh out loud in this era of the lazy ‘lolz’ can be a daunting and tricky task. But the world’s second funniest person advises, like every good mentor, that practice makes perfect.

At a time when Pakistan is constantly in the news for its dreaded link with extremists, Haroon’s lighthearted focus on the laughable absurdities that lend a lovable uniqueness to our desi culture is worthy of applause. The laugh riot was quintessentially Pakistani but with an urbane cosmopolitan touch. Here’s hoping this funny man continues to lighten the country’s image and spirits with his act.

Nothing’s too sacrosanct to escape his comic lens