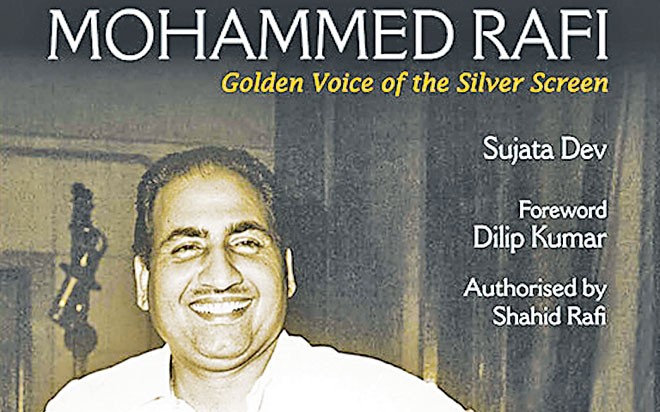 It has been more than 35 years since Mohammed Rafi passed away but the world continues to remember the great singer, who is still alive in the hearts of his fans and admirers, very fondly. Sujata Dev compiles the life of Bollywood’s finest in Golden Voice of the Silver Screen and helps in understanding the phenomenon known as Mohammed Rafi. The man who came from a religious family and reached the heights of glory with his voice, the playback singer who didn’t take remuneration from music composers who were trying to make their mark, the humble human being who never let anyone leave his house without a good meal - this book is his story.

This is a very well researched compilation and through this book, you will find out many things about Mohammed Rafi that you didn’t previously know: where he was born, who inspired him the most in his youth and how he travelled to Bombay to try his hand at playback singing. She also debates that singing was Mohammed Rafi’s true calling and he was destined for greatness since his youth. Who would have thought that a kid who failed 4th grade, worked as barber and didn’t complete school would one day become the voice of the world.

During the making of this book and 40-minute accompanying DVD, the writer met and spoke to many of Rafi’s friends and family members who spoke their mind. It was, however, the comments of the actors - for whom he did playback singing - and the music composers - who were behind his many hit numbers - that steals the show. In what are undeniably their last interviews, Shammi Kapoor, Joy Mukherjee, Dev Anand and many others shared their experience of being the men who were voiced by Mohammed Rafi. Joy Mukherjee didn’t use his maternal uncle Kishore Kumar, as he believed that it was Mohammed Rafi’s voice that guaranteed him success. Till his death, Shammi Kapoor maintained that Mohammed Rafi was his voice and he was incomplete without it.

It is a well-known fact that every music director wanted Rafi to sing for them; what the author brings fore are statistics that may entice the fans of the great singer. Mohammed Rafi sang 170 songs that were used in background, Naushad Ali made him sing 149 times and so on and so forth. In all, he sang as many as 4,425 Hindi film songs, 328 non-film songs and over 300 non-Hindi film songs, which is not a small achievement. But it is not as big a claim to include it in the Guinness World Records and the category of Most Number of Songs was demolished in 1991 after a long debate as to who sang more songs - Rafi or Lata.

The comments of music directors and his history with lyricist for whom Rafi sang are priceless, if you ask me. How devastated RD Burman was when he learnt of Rafi’s demise is something to read about just like the question ahead of Yamma Yamma ‘Aap hamare saath gayenge’. When Naushad Ali was asked whether there was something he wanted from Allah, he replied: "If He could send Rafi for just one hour." One gets to know that Rafi-Naushad-Shakeel Badayuni were the first trio to guarantee success of a song until the death of the lyricist in 1970. Where there was love, there was quarrels as well and Mohammed Rafi didn’t sing for OP Nayyar for many years after the two had a falling out in the 60s. He also didn’t share the studio with Lata Mangeshkar during their infamous ‘duel’ over the Royalty Issue; Suman Kalyanpur and Mahendra Kapoor made the most of the chances they got as replacements of the legendary singers during that time.

And then there are comments from singers of today; some had even sung with Mohammed Rafi whereas others grew up listening to him. Bollywood veteran Udit Narayan recalls an incident during one recording session with Rafi sahib after which the latter asked him if he could play a guitar … because it would work well on stage with his handsome looks. Amit Kumar said that the title track of ‘Aap Ke Deewane’ would always remain special to him since it provided him a chance to sing with his father (Kishore Kumar) and another legend Mohammed Rafi. Even those who didn’t make it big as playback singers but shared stage with the great man had good things to share about the man with the golden voice. Some said that he cared for his colleagues, others deliberated that he was a father figure off stage but a superstar when on it.

The book has a foreword by Dilip Kumar who preferred Rafi as his voice from the ’40s till the ’70s.

Extensive research is what makes this book about Mohammed Rafi a gem. His meeting with his favourite sportsman, boxer Mohammed Ali, gets mentioned in the book as does his generosity. He accepted to render his vocals for one rupee for Nisar Bazmi (who later migrated to Pakistan and became a legendary musician himself). Throughout the compilation, there are only errors when it comes to Rafi sahab’s religion i.e. Islam. She mentions Insha Allah instead of Masha Allah at the birth of baby Rafi and uses the term Naat instead of Hamd in another instance but besides that, there isn’t anything wrong with the narrative. Some of the chapters could have been merged to make the chronicle better but when you are a fan, nothing seems repetitive. The many photographs of Mohammed Rafi with his family, famous personalities and politicians bring him back to life and the writer must be commended for completing the task in an excellent manner.

1. Mohammed Rafi sang many songs for Amitabh Bachchan but he was most excited after singing ‘Chal Mere Bhai’ with Big B; he told his family that "Aaj hum ne superstar Amitabh Bachchan kay saath gaana gaya" without realizing that he himself was a superstar too!

5. During a concert in Pakistan in the 1960s, singer Masood Rana got upset when the locals loved Mohammad Rafi more; Madam Noor Jehan had to explain to the ‘Pakistani Rafi’ that it was impossible to imitate the veteran’s passionate rendering.

6. In his leisure time, in whose voice did the greatest playback singer of all time find solace? Our very own Mehdi Hassan and Ghulam Ali.