"If you aren’t ready to laugh at yourself, don’t come to my show"

These days in Pakistan, Saad Haroon - the second funniest man in the world - talks about the saturation of political satire, stereotypes and the emotional challenges of being a comedian 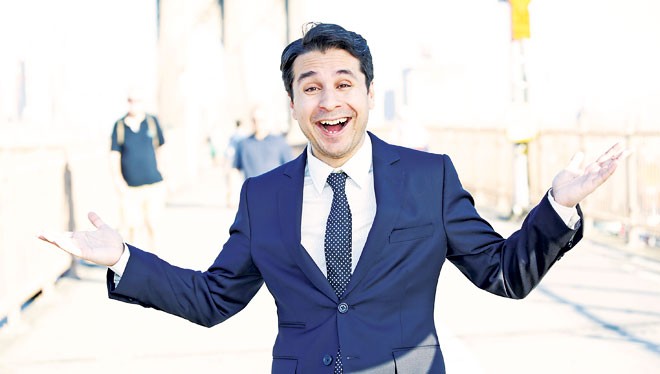 They say the deeper the pit, the more humour you need to dig yourself out of it. It’s no wonder then that comedy is second nature for Pakistanis, who often find themselves in… let’s be honest… deep sh*t. Social media is proof of this. Every time the country witnesses a major political or social crisis, the Internet gets flooded with meme after meme, dissecting the situation with sharp wit and, at times, dark humour. Imran Khan and his promise of ‘tabdeeli’, Altaf Hussain’s unique public speaking skills and Shahid Afridi’s ‘not-so-booming’ innings on the crease have all been the epicenter of comic relief from some very grave situations. Ironically, while comedy and political satire is abundant in our society, comedians aren’t.

Sitting top level in this rather under-saturated professional sector is Saad Haroon.

Most of us are well aware of Saad’s humble beginnings; he started off almost a decade ago with a comedy troupe called Black Fish and then later branched out to come into his own, shifting base to New York. His rib-tickling comedy shows have found a niche audience not only in Pakistan but also across the UK and the US. The stage is his nest and his act, effortless. However, not many people know that well before becoming a renowned comedian, Saad worked in the grueling textile industry; living the conventional, monotonous nine-to-five life like any obedient, desison would. He admits to have almost given his quintessentially ‘Pakistani’ father a heart attack by choosing to pursue his comical dreams - and that’s something that has become the butt of many jokes in his stand-up routines, including the ongoing ‘Don’t Jealous Jaani, My Heart is Pakistani’.

Fresh off the boat, Saad brings his brand of funny in this new, cheeky-titled performance that will travel across the country’s three main cities: Karachi, Lahore and Islamabad. Based on first-hand experience, the show is ridiculously entertaining as he plays on absurd cultural minutiae, Pakistani stereotypes and wacky struggles of marriage and adulthood. He grapples on weightier, often taken-for-granted topics like cousin marriages while simultaneously grilling his audience in signature style. And while politics is always a hot topic, this time around Saad is more inclined towards picking on society, at large.

"I used to pick a lot on politics and it worked every single time but I don’t do it on purpose now because its been done to death, even on TV. There are enough satirical TV shows making fun of politicians. But what people aren’t talking about anymore is society," Saad reflected in a candid conversation with Instep on the morning of his flight to Lahore for his next show. "All that we discuss these days is what political parties are doing or not doing; it’s a never-ending cycle of depressing, morose news that has taken over us all. Nothing about a political movement will enrich your life but these little things – how we live, how we are with friends and family – are the ones that impact us. I desperately want people to start thinking about them again because that’s what is part of our identity and what makes us Pakistani. Everything else is just gloss. Your day-to-day life, your loves and losses - those are more important."

That said, political inconsistencies, politically incorrect expletives, sexism and racial stereotyping are recurring themes on his shows and they are delivered with every possibility of offending someone or the other. There are times that Saad would swear like a sailor and then at times he would serve his comments wrapped in a shroud of self-censoring diplomacy. Even in a genre so liberal, there are certain no-go areas, as Saad explained, especially in Pakistan.

"Religion is a no-go area. Anything related to sexuality is also a no-go area and so are swear words to some extent. You can get away with some of the English ones but the Urdu ones kind of hit you in the face and are a bit more intense so they are better left unspoken," he revealed."However, it’s not like I wouldn’t go there. In terms of religion, I once did a song called ‘Burqa Woman’ that went viral and I do jokes on certain religious aspects as part of our cultural identity, coming on to them rather naturally. But these are very important things to people; they feel very personally about them here in Pakistan, so I am constantly editing myself based on the audience present."

Things are, of course, very different abroad where audiences are far more open-minded, interactive and aware of the creative license that comedy is allowed. With time Saad has learnt the art of adapting his riffs, with considerable structural skill, to his audience’s palate. He is met with success for doing so but being a Pakistani comedian in the West, he often falls prey to preconceived assumptions. While he freely pens riffs on stereotypes, he too gets stereotyped - the most common question thrown at him by foreign reporters is if he receives security threats. His usual answer is "no".

"We live in the age of the Internet so if somebody says something stupid to you, you just can’t take it seriously. You have to take it out of context because the context is this vast world of nothing that you logically cannot wrap your head around," Saad asserted. "Reporters abroad ask these kinds of questions because they have an angle - they have white readers who want to hear about the scary Muslim stuff. It really doesn’t come from a genuine place."

For Saad, dealing with being pigeonholed and tackling stereotyping isn’t hard but his job is. Comedy is serious business. It takes weeks to create, write and refine comic content and even after all the hard work, once he is on stage there is no editorial feedback to refer to. While the audience is tickled by his unpredictable and fairly improvised routines, long stretches of this single emotion - happiness - can be tiring and at times even frustrating.

"I just did seven shows and it can get tiring," he admitted."When you give so much of an emotion for a long stretch of time, you just run out of it; your brain is empty."

"A lot of the times, we comedians aren’t funny, silly people off stage. We are pretty somber and sober," he added. "We are trying to analyze different aspects of life but our main vehicle is to be funny. In a very weird way you are kind of putting other’s happiness before your own but then at the end of the day their happiness makes you happy so it’s crazy like that."

Saad is surely a whiz at that - making people happy. He cracks jokes that are farcical yet resonate so well with one or the other’s reality. His audience is almost always hysterical, rollicking in fits of laughter, but it’s his impulsive grilling that can sometimes offend the faint-hearted and the uptight. At his last show that fed into gender stereotyping, instead of breaking it, he seemed to have touched the wrong nerve of many women in the house. One of them was even overheard calling him a sexist.

"Stand-up comedy is a very new art form in Pakistan so people can get very judgmental and don’t know how to deal with it. There is any number of ways I can offend them and I do, but it’s my job," Saad responded."Come over to the show if you want to expand your horizons and laugh at yourself. But if you want to stay in your comfort zone and take yourself too seriously, don’t come to my show. If you are not going to come in with a positive attitude, it’s best you just tear up your money."

"I have broken a lot of stereotypes too and at the same time been sexist because that’s just comedy. There are a lot of times I make fun of myself just as much and the same people, who find some jokes sexist, won’t feel that I am being derogatory to myself. So, in comedy you are going to have to offend a lot of people and honestly if there’s anybody who should get offended, that’s my wife because if she is not offended, others have no business being offended," Saad added laughingly.

With that infectious attitude and instant likeability, Saad is riding high on success. After doing the rounds in Pakistan, his solo act is set to shuttle across to the UAE over the next month but the response here, at his hometown, has been so overwhelming that he might just add another show before he embarks on yet another international expedition. Saad has also been approached to feature in films in the wake of Pakistani cinema’s revival and while he hasn’t yet managed the time to get into talks, he sure is open to the idea. And why not? He is just as fearless and spontaneously funny in front of the camera as he is on stage - his TV show Real News still attracts a flurry of fans. However, his dreams are bigger. While his virtual self has already made an appearance on the Conan O’ Brian show through a bizarre video, he’d like to guest star in it himself and even in the Jerry Seinfeld show, that is if it ever starts airing again.

Saad serves as a perfect role model for those who want to do things differently in life but even then, Pakistan hasn’t seen a surge in stand-up comedians, especially English comedians. Perhaps because venturing into liberal arts is still not a reliable and secure career option in Pakistan and hence not as impressive on the CV. Saad remembers how he tried to impress his father-in-law by telling him that he works for the media, and not as a comedian - keeping the spectrum of human assessment rather broad.

"We live in a difficult society where you need money, security and safety and ‘jobs’ bring those things. Secondly, there is no one to train you here to do comedy. I had to self-train myself from day one and five to seven years in, I got the opportunities to learn more tricks. It’s not an easy art form and we didn’t really have a comedy scene here for the longest time. Even I worry about my career at times so I understand the place my parents are coming from. But I recently went to a comedy night where a group of young kids performed and it really warmed my heart. It takes time to do things differently," Saad concluded, masterfully hiding his fatigue behind the warming humility.

"If you aren’t ready to laugh at yourself, don’t come to my show"