All does not end well for Pakistan 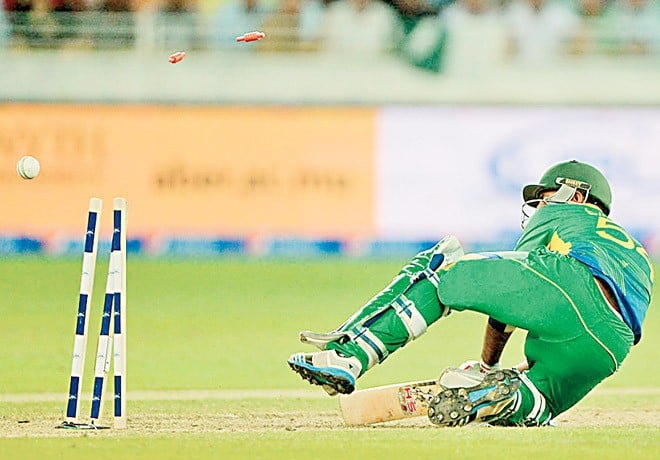 It seems everything fell apart for Pakistan at the end of their ‘home’ series against England. It began with a pretty impressive 2-0 Test series after the first Test escape and the near elusiveness in the second Test by England. Then the confident walk through victory in the first ODI. Pakistan were smiling well and truly after that one. So what went wrong for them to lose every match from there onwards, finishing up losers by 1-3 in the ODI series and then whitewashed in the T20Is?

Heaps of criticism is falling on Shahid Afridi but to be fair to the captain, he led from the front in the last two games that Pakistan lost from winning positions. Both those matches were alive till the last ball. The third one especially was in Pakistan’s control till the penultimate ball of the final over when Shoaib Malik had his moment of madness after such an intelligently paced innings.

Yes he messed it up in the Super Over along with Umar Akmal despite England surprisingly bowling Jordan who had gone for much as Pakistan chased England’s smallest total of the three games. But then that is part of the cricket. He had his connections with the bat and this time he didn’t. I don’t think you could fault him for his leadership.

If at all he can be pulled up it is for persisting with a totally out of sorts Ahmed Shahzad and not playing Rizwan in all the games. And I cannot understand what Hafeez is doing in T20 games ever since he has been banned from bowling. It is unfathomable and downright bonkers to prefer him over Rizwan. Or to not send Sarfraz up into the top three and play the extra bowler.

The selectors and team management have to take a firm stand when it comes to T20s. Imad Wasim will be returning soon and Pakistan need to play their firing youngsters if they are to mature till the arrival of the World Twenty20 in spring of 2016.

Which is why there has to be a firm control over Waqar Younis who definitely has a role to play in the major decision making, although in T20s Afridi has more sway over him than Misbah or Azhar in the other formats.

Waqar should never have gone for so much experimentation in the ODIs which led to the whole team being unbalanced and players being unsure of their roles. In the T20s also it was strange that Wahab Riaz was made to sit out the third game when Sohail Tanvir was persisted with. T20 is a format where fielding gathers far more importance than in any other format as the time to recoup an advantage is little. After his atrocious fielding in the second game there is simply no room for him in the side. Yes, his batting came in useful on a couple of occasions but then Wahab is no foot soldier in the lower order. And that one knock by him in the ODI series proved the point.

Truly Waqar has a lot to answer. He is winning in Test matches because every player commands his place in the side. Players like Younis Khan and Sarfaraz Ahmed, whom Waqar has never got along with, stare him down with performance. Younis Khan hinted at the pressure on him after his brilliant unbeaten big hundred won Pakistan the third Test against Sri Lanka. He said at the time that had he not made that hundred he could have been dropped in the next Test series. Maybe he wouldn’t have but that was his fear. Which shows that there was some fire behind the smoke.

Yasir Shah has come out from nowhere last year and improved by geometrical progression. That has helped Pakistan win some matches that could well have been drawn. Otherwise men whom Waqar has posed faith in, like Rahat Ali have hardly managed to make a match winning impact. Perhaps his claim to fame has been the improvement in Wahab Riaz but a coach has to work on more than just one man.

He has to build a team, like Trevor Bayliss has. There was no Anderson, Broad or Stokes in the seven limited over games and yet England won six at a stretch. Bayliss even had the temerity to sit down skipper Eoin Morgan in the second T20 to allow Jos Butler to lead and to test his capabilities. Note that he didn’t do it in the third game but in the second when the series was still alive. That was to test Butler under pressure with the series still at stake.

Now Bayliss has a deep bowl from which to pick his cherries. He made his experiments with a proper thought behind it, not playing players out of positions. Waqar on the other hand has confused rising talent like Babar Azam who suddenly found himself as opener when he has made his name in the middle order. Likewise Mohammad Irfan doesn’t know whether he is first choice bowler or a back up to Wahab Riaz and Sohail Tanvir.

Further Junaid Khan was callously treated through the series, made to sit out in the Tests and then not being retained for the limited over series. I would have thought that he could have been selected in place of Sohail Tanvir who cannot rise above whatever level he has risen to till now. Junaid was fantastic on his last tour to India few years back and could have been nurtured back to bowl again on those wickets come the World Twenty20.

Waqar nevertheless seems to have been justified in his criticism of Umar Akmal and his effort to keep him and Ahmed Shahzad out of the playing eleven, if not the tour squad.

The shot that the youngest Akmal played in the third T20 was devoid of common sense considering the match situation. After six years the question has seriously arisen: Should he be condemned to the sidelines if only because of his serial impetuosity? Especially with cousin Babar Azam having proven himself in the 50-over format and now ready for the shortest one. Even Sohaib Maqsood demands a bigger run that a couple of T20s per series despite his disappointments.

Lastly, a long workshop has to be held on running between the wickets. Most of the run outs were not just stupid they were downright embarrassing at this level. Twice the batsmen ended up at the same end; in one of them actually running to surpass each other. This is getting out of hand. Hafeez remains the man who confuses most though he often falls on his own sword. But something has to happen now. Without meaning to pun, time is running out for Pakistan to get the basics right.

All does not end well for Pakistan