LIFE’s 50 Years of James Bond covers the suave secret agent’s life on screen, in fiction and finally his many imitations 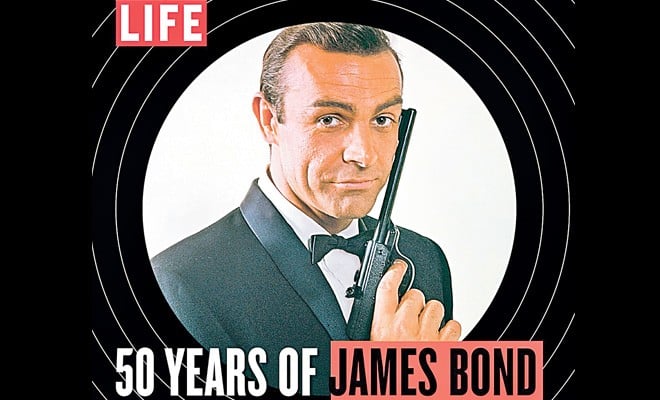 Did you know that Sean Connery isn’t the first actor to play James Bond on the big screen? That Sir Roger Moore isn’t the only contender when it comes to playing James Bond at 57 years? Or that Ian Fleming - the creator of James Bond -is something more than just a novelist? Find out all there is to know about James Bond through LIFE’s 50 Years of James Bond that covers the suave secret agent’s life on screen, in fiction and finally his many imitations, across TV shows like The Man from UNCLE, Get Smart, Johnny English as well as the Austin Powers movies.

This guide to James Bond will surely appeal to those who have followed 007’s career from the start, but perhaps still don’t know who played the character for the very first time. American actor Barry Nelson is the first actor to play Bond - this time on TV; his character was not James Bond but Jimmy Bond who used to work for the (American) CIA, not (British) MI-6. This book also tells you anecdotes and salient details that are not as common in the popular culture lexicon. For instance, the author of the James Bond films, Ian Fleming was a high-ranking officer in the British Intelligence during the Second World War. Interesting, isn’t it?

James Bond made his feature film debut more than 50 years ago and this book traces the origin of the character (in print) as well as on the silver screen. The journey that began with Sean Connery and is still going strong with Daniel Craig also saw George Lazenby, Roger Moore, Timothy Dalton and Pierce Brosnan don the tuxedo to play 007.

This book tells you what are the qualities a potential actor must possess if he wishes to play the greatest spy on the planet. In the chapter, In Search of the Next Bond, the editors at LIFE go back in time and bring out a compilation of the final six candidates. Australian model George Lazenby finally won the race to 007, but not before facing stiff competition from other prospective Bonds.

What makes this book a must-have is the fact that it is a sort of Life’s Eye View, if you know what I mean. The magazine was in circulation for nearly five decades, which means its coverage goes back to the beginning. For those who like collecting facts, this book merits a read because it is packed with information.

It tells you that Roger Moore changed his light hair in all his outings as James Bond, that Aston Martin DB5 was one of the best-selling toys in 1965 and that the secret agent has an actual secret designation - he is Commander James Bond.

The pictures from the classic archives add colour to this already colourful book, which is made more interesting by the box items marked Top Secret. The data in these boxes was either never revealed or was known to a few and makes for an engaging read.

If you want to know the people who inspired Fleming to create a secret agent and who played 007 on screen, this book is the perfect place to learn everything about Bond. Some may raise an eyebrow on knowing that before he played the secret agent in the late ‘80s, Timothy Dalton was also considered for the role in the early ‘70s. Apparently, Ian Fleming didn’t approve of Sean Connery at first but later changed his mind, and the description of James Bond after witnessing him in action.

Director Guy Hamilton wanted to use a real laser in Goldfinger but was convinced not to and a dummy laser was used instead.

Each film featuring James Bond - be it the unofficial Never Say Never Again or Casino Royale spoof - all are discussed at length in this Bond souvenir. The editors make remarks on different Bonds (most negative comments are reserved for Timothy Dalton), the gadgets used in the movies, the heroines who attracted Bond’s attention and the cars he drove (and in one film, swam). The films’ score as well as the friends and foes are also given space; the more dangerous the bad guy, the more interesting the action sequences.

James Bond is the ultimate hero when it comes to films, be it his adventures in India, Afghanistan, Africa, America or outer space, he never disappoints his fans. Neither does this book, which is interesting from the first page till the last and demands multiple reading because ‘one view is not enough!’