"Veil isn’t the solution; the political will to end harassment is"

Iranian feminist scholar, Dr. Homa Hoodfar talks about the veil and the need for understanding the complexities of the ancient tradition 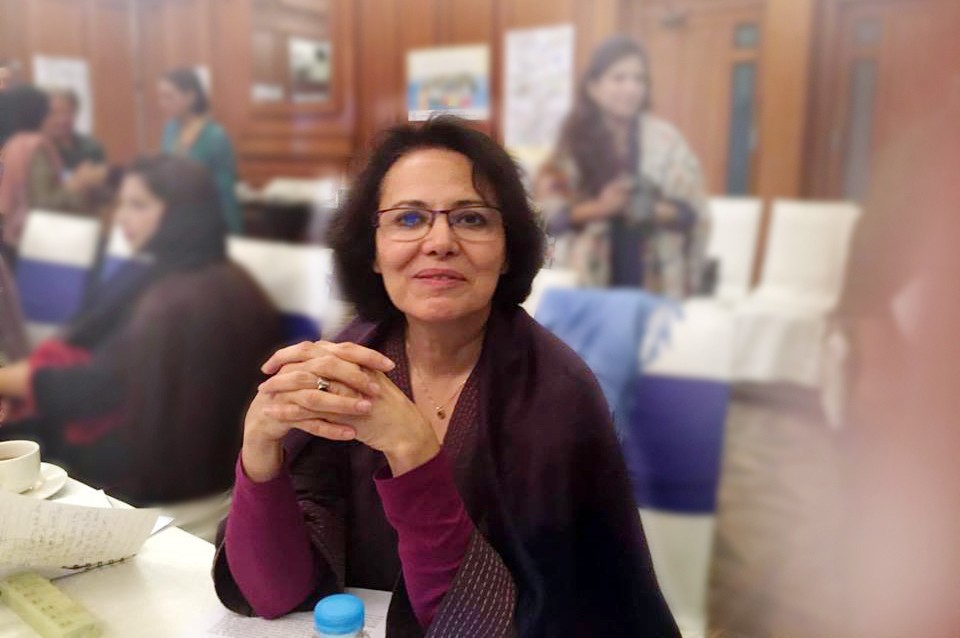 Iranian feminist scholar, Dr. Homa Hoodfar, a professor of Anthropology at Concordia University (Canada), has worked extensively on gender and development in Muslim contexts and is the author of publications like The Veil in Their Minds and on Our Heads: The Persistence of Colonial Images of Muslim Women. She was in Lahore recently to attend an international conference of Women’s Empowerment and Leadership Development for Democratisation (WELDD) programme organised by Shirkat Gah -- Women’s Resource Centre. Here she talks to The News on Sunday about the veil and the need for understanding the complexities of the ancient tradition.

The News on Sunday: You’ve written about the veil at great length. Is there any particular reason? Does your Iranian connection have anything to do with it?

Homa Hoodfar: Well, the simple reason is that I was an Iranian student studying abroad at the time when the Revolution happened and the veil became compulsory -- something that we hadn’t imagined. Even my grandmother used to wear the veil but it wasn’t compulsory, rather it was something women traditionally wore in Iran, very much like they do in Pakistan. Then suddenly, the veil became the symbol of the Iranian Revolution, a revolution that all of us had worked for -- the demand for democracy and political freedom and freedom from being dominated by the west, especially the US. These were the demands of the revolution and what did we get -- the veil.

On the other hand, in the West, there is misrepresentation of the veil which is not just a religious symbol. And the Iranian Revolution of course didn’t help because that’s what they officially show -- women wearing black all the time. Also living in the West, people always assumed that I had stepped out of my culture. I engaged with these issues on a personal level, but I never wanted my academic life to be associated with the veil. But guess what: if you are an Iranian Muslim abroad (it didn’t matter that my expertise was in the field of gender and development) the question always was, "oh, so you’re not wearing the veil here? How do you feel? Do you feel liberated?"

So it encouraged me then to pursue this. You get drawn in even as you resist. I had never intended to be an academic looking at the veil as such. I was more interested in sexuality. The veil and Female Genital Mutilation were two subjects that I had said I would never write about. But then I had to.

TNS: You have travelled extensively and lived within both Western and Middle Eastern countries. What does the veil mean across cultures besides just religious symbolism as you just mentioned?

HH: The veil means many different things in different contexts. For instance, when I was living in a village in Egypt, for women in the low income community the veil meant that they were breaking the taboo of going out to work, to university, coming home late or even wanting to go to the mosque. I had no idea that, as a woman, you had no space in the mosque because in Iran women always had the mosque. But in Egypt if I were walking around and got tired, I always had a little scarf in my bag that I would put on and go to the mosque and sit there. There would be no women in the mosque and it would be very quiet but no one told me anything.

Two months later, I realised that every week I had been breaking tradition. Some Egyptian women were wearing the veil and having their Quranic classes in mosques because they too were breaking the taboo. It helped them claim a space in religion which was a part of their lives but they had no say in it. So it was a very different country.

Then I have lived in the West -- in England and Canada. In Britain, a lot of Pakistani women for instance took the veil so that they could go and play football, go out and live in another city at times which was impossible in the 1970s. In a way, veil was a tool for integration and not segregation.

TNS: There is a view that the veil is imposed by the male gender to control female sexuality. How do you respond to that?

HH: It is probably true. Why is that women are wearing the veil and men are not? But women are not just accepting this, they are subverting it too.

I’ll give you a story. I used to study in England and would go back to Iran in the summers. I was 20 years old at the time and I told my grandmother: "I will never live the way you did. I want to live with freedom and I will choose my own husband." (She was concerned like all grandmothers that I should get married. All of us were studying at the time and no one wanted to get married.) I said that you had no freedom and no choice. She replied: "Who said that, what nonsense!" She told me she went with her mother and younger aunt to see him at the shop that he worked at. The actual expression that she used was: "Well then I replied to my aunt that he’s palatable". She added that, it wasn’t the same for men -- they couldn’t see you unless they were family because unlike you they couldn’t put the chador on. She acknowledged that the real problem was for the upper classes where the marriages were arranged because of family alliances and businesses.

TNS: Going into the history of veiling, did it start as a display of religious symbolism or were there other reasons for the practice?

HH: The practice is at least 5000 years old because we have references to it. The women of the upper classes were veiled and segregated to distinguish them from other people. Even at the time of Caliph Omar and the Holy Prophet (PBUH), it was the wives of the Prophet who were supposed to be segregated and it was Omar who said in one of his speeches that the slave women should not wear the veil for this reason.

So, it was actually more a question of status and class rather than religion. If you look at the literature, the veil as we know it became important in the 18th century. If you read old European travelogues [about the East], the way women are represented -- a lot of the dresses worn by especially the peasant women were low-cut -- [they show that] they considered Muslim women as not adequately covered compared to women in the West.

After colonisation, the veil was represented as a symbol of oppression. On its own, the veil is just a piece of cloth but how we use it and the meaning -- the symbolic meaning -- we give to it that makes the difference.

Of course, the veil today… the way they are telling you to cover your face and this and that, is oppressive. But even this oppressive measure can be subverted and women can use it to their advantage. There is this assumption that women are victims and have no resistance and, therefore, they have to accept it. I have lived in Iran, Egypt, UK and Canada and have travelled to Asian countries, women make use of the veil in many different ways. Women sometimes prioritise and pick what their most important battles are. Like in Egypt, in the 1980s in a poor neighbourhood for my research, only young educated women put the veil on because that would allow them to break a lot of other taboos, and because they felt that it would make their mobility easy.

Street harassment, unfortunately, is a serious issue in the Middle East whether it is Iran, Turkey or Egypt (I don’t know so much about Pakistan). If you’re a woman on your own in the street in the evening, men think they have the freedom to harass you.

HH: Well, it depends. Initially in the 1980s when I was there (in the Middle East), not very many women wore the veil. Because some women wore the veil and most women didn’t, most men stayed away from them. In a situation where everyone wears the veil, it doesn’t help. I had a Saudi Arabian student -- a Syrian who lived in Saudi Arabia -- who told me that they were entirely covered (wearing the Burqa) because the school they went to said that their faces and everything had to be covered. Even then the men would blow kisses at them when the [school] bus they were riding on stopped at the traffic light.

The problem is that rather than acknowledging that street harassment is wrong and men should be stopped, we put the entire onus on women: "Because men harass you, you should wear this… Because men harass you, you should wear the veil… We don’t really want to force you but it’s for your own protection…" So that is a cultural problem, there is no political will to fight it. Instead it allows men to harass women without feeling any sense of responsibility. Just a few days ago, people were talking about this woman who got raped by someone she got to know on Facebook. Now the fact that she was on Facebook had nothing to do with the fact that she was raped but we as a society always put the blame on women. That in fact creates the problem. And we say, okay "the veil is the solution" when it isn’t.

TNS: What should be done then to counter the problem of street harassment? How can we ensure safety of women in public spaces in a broader sense?

HH: The fact is that veil isn’t the solution. The political will to end harassment is the solution because in the context of Egypt and Saudi Arabia, the veil hasn’t actually helped. Today if a veiled woman walks in a street in Egypt, relative to the 1980s when I was there, she would face as much harassment as a woman wearing western style clothing… because most women are also wearing the veil anyway. So it no longer signifies class like it used to. It was adopted in a way to negotiate, but when everybody does it, the value of negotiation comes down.

"Veil isn’t the solution; the political will to end harassment is"