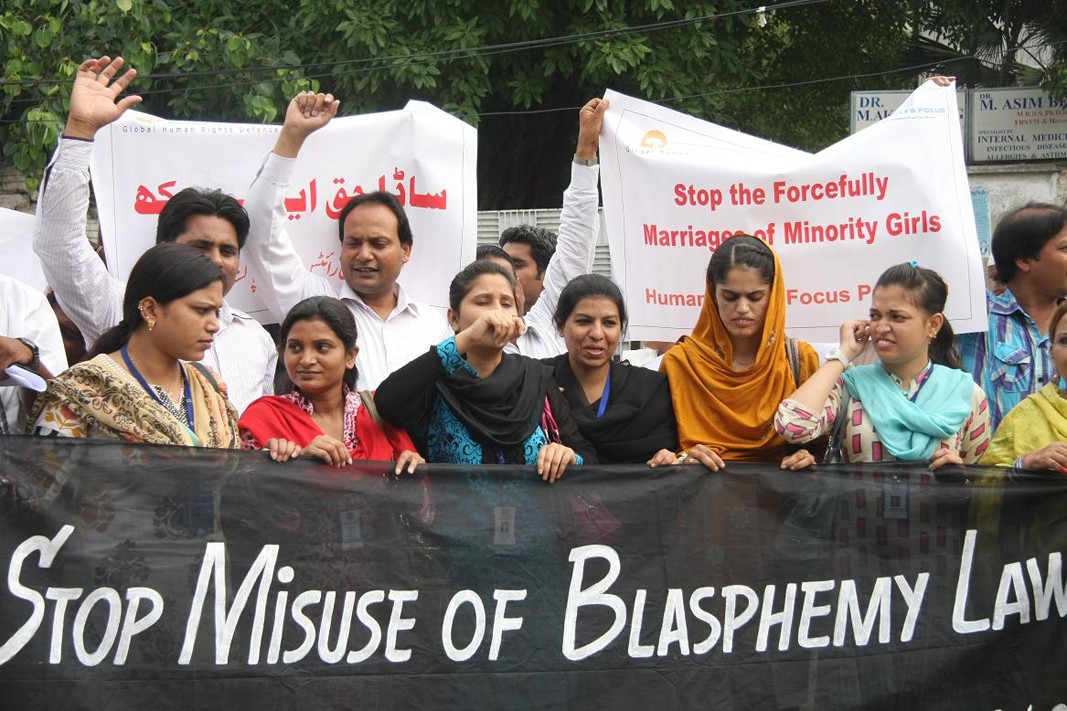 The perils of being accused of ‘offences relating to religion’ under the Pakistan Penal Code (PPC), sometimes referred to as blasphemy laws (sections 295 to 298-C of the PPC), are well known today.

The assassination of a governor of the Punjab because he had criticised the blasphemy law and a judge of the high court for acquitting two men accused of blasphemy has demonstrated that the risks are not restricted only to the accused under that law.

A report published earlier this month by the International Commission of Jurists (ICJ) "On Trial, The Implementation of Pakistan’s Blasphemy Laws" firmly trains the spotlight on some of the main problems with regard to the process, judicial and otherwise, that follows accusations of blasphemy.

In itself a critique of Pakistan’s blasphemy laws is not something terribly unique. However, the value of the 62-page report by the ICJ -- the Geneva-based organisation that seeks to protect and promote human rights through rule of law -- lies in the structured manner in which it flags not just the deficiencies of the law but also the various threats and challenges that blasphemy accused, their families, lawyers and the judges hearing the case routinely face.

ICJ is composed of around 60 eminent judges and lawyers from all parts of the world. It deserves some credit for not producing a report by the lawyers and for the lawyers. Despite repeated references to national and international legal standards and judicial decisions, the report is not too difficult to follow for those who are not legally trained. And that is no small achievement. It argues that the deep flaws in the system are routinely brushed under the carpet.

The authors quickly recount the evolution of the blasphemy laws so that the bulk of the report addresses not the history of how we ended up with the law but how the law, as it stands today, is applied inside the courtroom and outside.

The report includes excerpts from numerous judgements of the Supreme Court and high courts, which articulate the many concerns of the superior judiciary over how the law is implemented and also some instances where the impartiality of the judges appears to be questionable, to say the least. There are court decisions speaking of the abuse of the law to settle personal scores. Many of the findings of the report are based on over one hundred reported and around a dozen unreported cases from the sessions and high courts.

Citing these cases and reproducing important sections of the judgements, which are not confidential or secret documents, might not seem like anything ground-breaking. It does, however, indicate that there are pressing and, for want of a better expression, common sense concerns among judges that have been articulated again and again but these have been ignored by the policymakers. Some might conclude that not introducing the safeguards suggested in the court decisions might amount to apathy, shirking of responsibility, appeasement of radical elements or bias, or all of the above, on part of the authorities.

Many people in Pakistan are very sensitive about anyone from abroad pointing out denial of rights in the country and are quick to protest perceived invasion of our sovereignty. In this context, the report does its bit by pointing out that the concerns regarding the application of the law and what needs to be done to correct things is clearly understood at the domestic level and should be well known to the people at the helm of affairs.

Direct quotes from the individuals convicted for or accused of blasphemy help the reader grasp their desperation and frustration over how they are dealt with. The report informs the reader on how the guilt of blasphemy accused is presumed by all concerned and due process right is routinely denied and there are real risks to the very life of the accused, his relatives and lawyer.

The ICJ report concludes with detailed recommendations for a range of stakeholders. It can be argued that any attempt at reform that does not address or involve religious scholars might find its task made even more difficult than it already is.

The report could certainly have offered a little bit more in some aspects. Sharing names, cities and somewhat more detailed circumstances of the accused might have helped understand the context better. The need for safety of those who agreed to share their views with ICJ seems to have prevented that.

The assassination of Rashid Rehman advocate in Multan in 2014 for daring to defend a blasphemy accused and the difficulties that the accused in that case faced in finding another lawyer brave enough to represent him might lead some to conclude that the trial of a blasphemy accused, much less a fair trial, might be very difficult in Pakistan today. The very lives of blasphemy accused are under threat, and the threats have been acknowledged and underlined in the courts’ verdicts themselves. The right to a fair trial, therefore, offers a thoroughly relevant perspective to look at the issue of blasphemy in Pakistan

Unfortunately, the media and civil society have hesitated to highlight these aspects and some sections have been scared into silence, particularly since governor Salman Taseer was slain by his guard. In raising the issues that should be raised in the context of the blasphemy law, the report renders a service that one hopes more Pakistani organisations would have the guts for.