With Urdu and English vying for supremacy and authority, most of the leading intellectuals find themselves at the linguistic crossroads 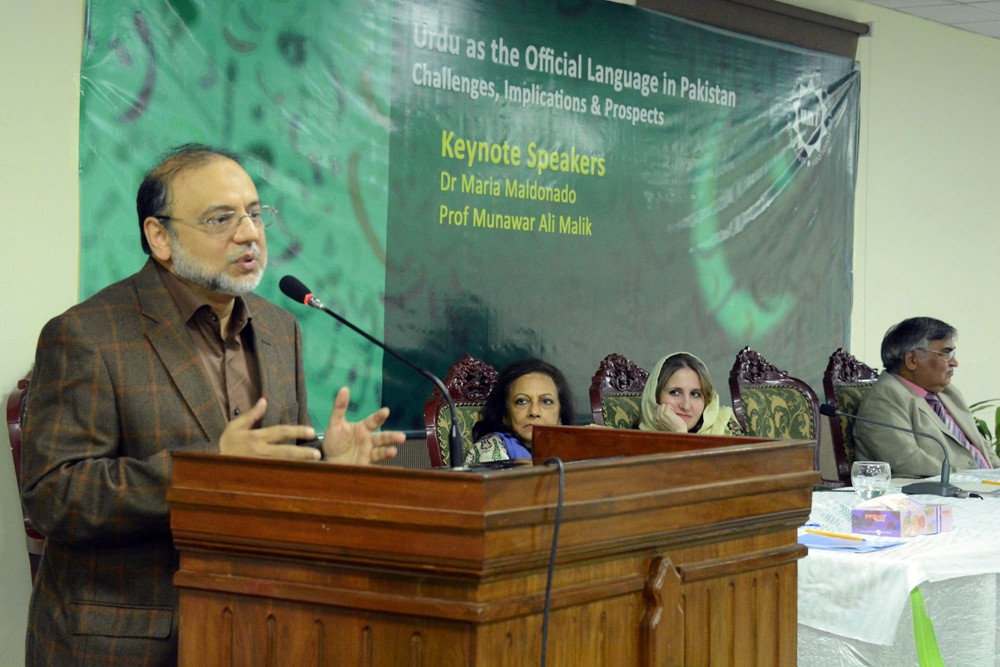 When Muhammad Ali Jinnah as the Governor General made the historic declamation of assigning Urdu the status of state language in 1948, nobody knew how honouring this commitment by the founder of Pakistan will become a challenge for the prospective constitutions and successive governments. In spite of various movements in favour of a unified linguistic identity, continual experimentations in educational institutes by authorities with regard to the implementation of Urdu as the official language and as a medium of instruction, and the Supreme Court ruling of September 8, 2015 which reiterates the Article 251 of 1973 constitution, Pakistan’s linguistic situation, instead of becoming clear, has become even more cloudy and ambiguous.

With this backdrop, the Department of English Language and Literature, The University of Management and Technology Lahore found it opportune to invite scholars from different fields and open a discussion on how the decision of adopting Urdu as an official language can be viewed on the one hand as a source of controversy and an improbable practice and on the other as a means to promote national language and facilitate its immersion in the social and educational fabric of Pakistan. The seminar entitled "Urdu as the Official Language in Pakistan: Challenges, Implications and Prospects" held on November 14 aimed to create a platform for eminent linguists, intellectuals and policy makers to come together and discuss the various aspects and implications of language pedagogy, policy and planning.

This has become all the more important after the Chief Justice of Pakistan Jawwad S. Khawaja’s historic judgement of September 8, ordering that within a period of three months Urdu will be made the official language of Pakistan. This ruling by the Supreme Court has generated a new debate as to how and with what implications Urdu can be adopted as an official language. With this decision there hangs in the air many unaccounted for and controversial aspects of language use and acquisition in the context of Pakistan’s official medium of instruction and communication especially in the education sector, which Dr Tariq Rahman sarcastically calls the white elephant in the room about which no official documents makes any mention of.

The seminar allowed the speakers and participants to acquaint themselves with and assess the prevailing views about the topic and propose viable solutions that carry weight in the formation of language policies in Pakistan. The seminar was attended by the Rector, UMT, Dr Hasan Sohaib Murad, former Vice Chancellor, Lahore College for Women, Lahore, Dr Sabiha Mansoor, Director External Linkages, University of the Punjab, Dr Maria Maldonado, Dean of Social Sciences and Humanities UMT, Prof Dr Abdul Hameed, Prof Munawar Ali Malik and various heads of departments, faculty members, researcher and students from various universities and educational institutes.

The speakers underscored the repercussions of the Supreme Court ruling while wondering how an order which failed to produce results in more than 40 years would be executed in three months. A great deal of emphasis was put on the impractical nature of the procedural part of the directive. Strewn with various ambiguities, the ruling is phrased in such a manner as to leave room for several interpretations. For instance, the reference to ‘unnecessary delays’ in the carrying out of the order, the specification of impractical timeline, the implications of possible violation of the order, the parallel existence of Urdu and English versions of official and legal documents, and the delivery of speeches by the government officials and dignitaries in Urdu, despite good nationalistic intentions, not only require further elaboration and explanation but in some cases fail to make any sense to a rational mind.

Despite various movements in favour of a unified linguistic identity, Pakistan’s linguistic situation, instead of becoming clear, has become even more cloudy.

Alluding to previous attempts of Pakistani authorities in the promotion of Urdu, Prof Malik appreciated the National Language Promotion Department which strove to facilitate the adoption of Urdu as the official language by taking various measures, including the preparation of dictionaries and helping material for the training of in-service personnel. The fact, however, is that all these efforts which if logistically analysed gives off a sense of half-hearted and unorganised engagement with the problem of determining the status of Urdu in Pakistan. Consequently, the task of proper switch-over to Urdu still remains unfulfilled resulting in the creation of an intricate linguistic demography.

Taking this point further, Dr Maldonado, one of the key speakers of the seminar, pointed out that in the presence of three different systems of education in Pakistan it is near to impossible to have one officiating language. The cornucopia of varying levels of linguistic proficiencies indirectly affect the understanding and status of both English and Urdu languages. Before the formation of language policies the educational infrastructure of Pakistan needs to undergo a radical change, freeing itself from the bureaucratic privileging of English and prestige associated with its use and acquisition.

The speakers wondered how the government is planning to measure to what extent the provincial governments have been able to follow the implementation process and how much they have progressed in this regard given that the timeline has almost expired. Since people are still using English in their official business and as the medium of instruction in educational institutes, how will they be forced to discontinue their past practices is a task, if not impossible, herculean in nature. In almost all academic and professional areas, Dr Maldonado accentuated the need of experts for the translation of specialised knowledge fields. So if this is what Supreme Court terms ‘unnecessary delays’, then these delays are going to continue affecting the progress of the order till eternity.

Some of the major challenges that this ruling raised for provincial governments were identified by Prof Malik. The first relates to the proficiency in Urdu speech and drafting which can only be achieved with rigorous training and preparation of comprehensive syllabus and reading and writing material. The second challenge is to provide sufficient resources to National Language Authority to allow them to develop Urdu computer softwares, an inevitable need of the day. Lastly, there is a need among certain classes in society to hold Urdu in due esteem, a point reprehending the existence of two languages in which one is a foreign language and a sign of imperial hegemony.

There was a consensus among speakers that Urdu can suffice as the official language in Pakistan. Dr Mansoor, in this regard, strongly supported the use of Urdu in higher education and official business. However, parallel with this pro-government stance ran apprehensions shown by some speakers about the applicability of such a drastic action. They stated that the transition if inevitable can only happen without disrupting the existing linguistic scenario and creating a harmony between languages in use which may perhaps be closer to the ambitious position some scholars have taken by proposing a new language called ‘Pakistani’, the only way for them to get out of the linguistic rigmarole Pakistan is beset with today.

Dr Abdul Hameed, while praising the flexibility of Urdu language and its capacity to adapt itself to newly-emerging linguistic demands and ever-changing social situation, highlighted the cognitive suitability of mother tongues for primary education and the need to use English for scientific and technological purposes. Taking a middle position, Prof Malik favoured Urdu equivalents of English words and terms, and in cases where such equivalents are not possible, the availability of current English terms in Urdu script.

Although different speakers proposed different ways to achieve harmony between Urdu and English and smooth switchover from one language to another, Dr Hasan Sohaib Murad, Rector UMT, was skeptic about the recent ruling which had come out of the blue and without prior homework. While citing various linguistic situations around the globe, he emphasised the formation of a unified linguistic sensibility. However, also realising the pitfalls of making generalisations, he did put forward the benefits of single state national language and its usage in all walks of life, which makes it a sign of prestige and delivers its speakers of inferiority complex.

Already a hodgepodge of various dialects and tongues, with Urdu and English vying for supremacy and authority as official and academic languages and regional languages dragging behind, most of the leading intellectuals in the country have found themselves at the crossroads with no direction to follow. Whether it is about the change in power relations or inversion of linguistic privileges as in Dr Tariq Rahman’s words, there are serious problems involved in the doability and the procedure of the action.

Expressing these ideas and thanking the worthy guests, the Chairperson of the Department, Dr Muhammad Shaban, restated the need to engage scholars and intellectuals to work alongside government authorities in the formation of language policies in Pakistan. He emphasised the need to have regular discussion forums such as this seminar where government officials could also be attendance.