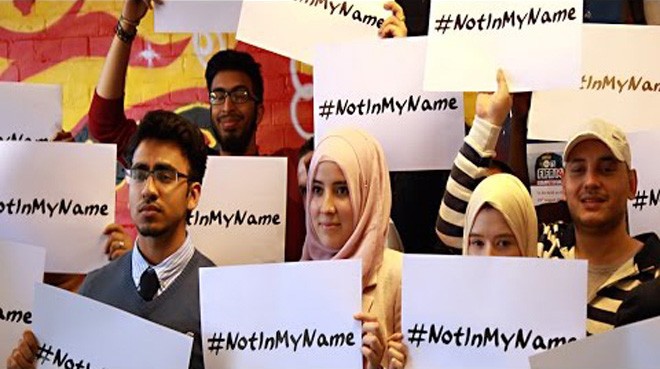 In the suburbs of Paris, a French mother of Pakistani origin tells the media about the fears she has for her children, "We had come here for our children’s future, and now we are afraid of the repercussions of the attacks in Paris". Already, there appear to be direct revenge attacks against Muslims occurring in Europe; the alleged burning of a migrants’ camp in Calais; a mosque and a Muslim community centre were attacked in Scotland, amongst others.

Shifting our gaze from Europe to Pakistan, another mother who plans to send her children abroad, to the West, for higher education, sums up the fears of others like herself on Facebook, "This is a time when you are supposed to be apologetic while declaring your religion. Being a Muslim will feel like a disability one is born with. You go defensive when someone mentions Islam. You explain how Islam is the religion of peace, kindness and forgiveness, and no one believes you. The Paris attack is like 9/11 once again (for us)."

In spite of the recent events, the situation is still well under control in many Western countries, but they could go out of control any moment if not handled with care, by all stakeholders involved. Most human rights organisations, leaders and opinion-makers, with a liberal-inclination of mind or leftist ideologies, are blaming the conservative policies of their governments and the so-called "right-wing media" for rising Islamophobia, but not the extremist groups among Muslims themselves for this divisive trend in their societies.

For instance, the Islamic Human Rights Commission, a UK-based Muslim rights advocacy group, recently launched a report that "focuses the study in the context of the environment that perpetuates hatred amongst individuals. Institutional and structural change needs to be the focus and not oppressed minority communities." This perception presupposes that Muslim minority is oppressed and that it shouldn’t share its responsibility of the stereotyping and the phobia.

According to the Islamic Human Rights Commission, between 2010 and 2014 the number of people who reported seeing Islamophobia directed at someone else increased from 50 per cent to 82 per cent. During the same period, the number of people stating they had witnessed negative stereotypes about Islam and Muslims spiked from 69 per cent to 93 per cent, which suggests that these experiencing of stereotyping have become almost universal.

Another worrying trend highlighted in the analysis of TellMama, an online website monitoring Islamophobic incidents in the UK, detailed how global acts of terror -- whether in Paris, Copenhagen or Sydney -- inspired, or at least fostered, an environment where individuals felt justified in spreading anti-Muslim hate either on social media or on a street-based level.

In the wake of the Paris atrocities, the number of reported incidents for offline and online incidents increased. Stereotyping is said to be a by-product of the modernistic media, over-simplification and dumbing down of information, especially by television channels and social media. Anything done by any Muslim individual or groups, even from fringe sections, is slammed on the global community of Muslims.

This has created a culture of images and stereotypes of Muslims that inspired the average TV viewer, newspaper reader, pub-goer, bus driver or any Tom, Dick and Harry, to see a partner of terrorism in every Muslim. This is dangerous for Muslims living in the Western cities, and worse for living in overwhelmingly White towns.

Currently, rights activists are blaming this stereotyping of Muslims on the media. However, the stereotyping of Muslims is not only due to them, the White/Christian politicians or the opinion maker. Certain trends, in the emerging fashion of political statements, are also obstructing the social cohesion and integration of Muslims with British society, especially at a time when many believe that there is an ‘environment that perpetuates hatred amongst individuals’.

As there has been a spike in Islamophobic incidents, there has been a spike in ‘Islamic-mania’, which lead to a significant increase in the number of hijabis, Arab dresses and etiquettes among non-Arab Muslim communities, especially of Pakistani and Bangladeshi origins. An expert who recently visited Birmingham claims that in several places ‘Nasheed’ has replaced ‘Qawwali’!

According to well-respected researcher, Mehmood Naqshbandi, "…first generation immigrants are preoccupied with basic needs -- security of income, property and family. Second generations are preoccupied with social status, middle-class values and choosing the professions if they can. Third generations lose the sense of an ethnic or racial identity and try to assert their own identities, and for an increasing number that means asserting a Muslim identity that their parents and grand-parents (and contemporary relatives in the mother country) eschewed."

Naqshbandi goes on to say further, "The youth assert themselves in the wider society through their identity and appearance, by provocative political statements, by rejection of their parents’ cultural constraints, and antagonistic posturing."

In his research, he elaborates that for the Asian Muslim youth, this usually means:

• adoption of Arabic-sourced reinterpretations of Islamic practice, i.e., Salafi-ism -- return to the roots, the salaf, of Islam -- rejecting the limited knowledge-base of mosque imams.

"These changes have taken place gradually since around 1990, so inevitably Salafi religious factions have become the nucleus of more recent splits in the mosque, communities and, therefore, have led to newer breakaway mosques, i.e., the approximately 75 smaller, predominantly Asian, Salafi-inclined ones."

These changes are manifested in a growing trend of the hijab and Arab dress codes and other Arab etiquette, which are similar to the practices that distinguish the followers of ISIS from other Muslims. That’s a manifestation of Islamic-mania and it’s naturally unacceptable for a non-Muslim commoner on London streets, or for that matter in Birmingham or Manchester.

In this perspective, the moderate Muslims, rights and advocacy groups fighting against Islamophobia will have to educate themselves and other young members of their communities to distance themselves from the ideology, dress codes, etiquettes and other cultural practices, which could possibly bring them closer to the ISIS or any such extremist groups.

The moderate Muslims, who are still by far the majority in the UK, will have to take the lead and displace the extremists from the stage by claiming their rightful place in the British society, where integrity and social cohesion is their way to grow and fight against this phobia. Many mothers from Pakistan or of Pakistani origin want that acrimony and phobia to be brought to an end so that their children can prosper when they travel to UK for higher education and better opportunities.