Considering the immensity and impact of migration on humankind in the 20th century, there is relative paucity of films on the subject 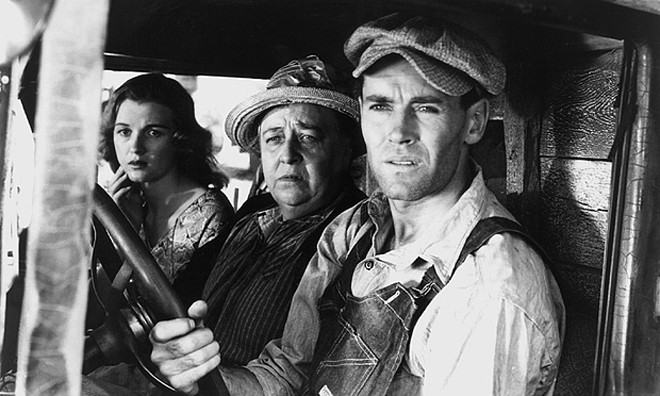 As the concept of a ‘Fortress Europe’ is being challenged by hundreds of thousands of migrants knocking down barriers in Hungary and Slovenia, one wonders how little has been written in literature or portrayed in films regarding this great human tragedy. Though almost seven decades after the Holocaust, almost every other year a movie is produced to remind the world how badly the Jews were treated by the Nazis. Invariably, the movies about the holocaust receive rave reviews and accolades in international film festivals.

Movies and novels about migration of people from one place to another -- be it inland migration as depicted in the Grapes of Wrath written by John Steinbeck in 1930s or as shown in the 1973 Indian movie Garm Hawa written by Ismat Chughtai -- have been few and far between.

If you look at the immensity and impact of migration on humankind in the 20th century, you realise that almost all continents have witnessed tremendous suffering in the process, arguably even longer lasting than WWI and WWII. But you see many more movies about World Wars than on peoples’ movement.

The relative paucity of movies on migration has resulted in a genre that even defies classification. The closest one can come up with is the genre of ‘road movies’. Genre (pronounced zhahnr) is a kind or style of art or literature and in early cinema it was used as a way of organising films according to type; in the late 1960s it became a key concept in Anglo-Saxon film theory. Genre is more than mere generic cataloguing, and it does not refer just to film type but to spectator expectation as to how the film will proceed and end.

That’s where the generic term ‘road movies’ becomes inadequate for the films on migration. True, that in ‘road movies’ protagonists are on the move just as in most Western movies, but they can be comedies such as It Happened One Night (Frank Capra, 1934), about joyriders such as Easy Rider (Dennis Hopper, 1969), or about women travellers looking for fun and free life as in Thelma and Louise (Ridley Scott, 1991). Here ‘spectator expectations’ play an important role in defining genre for a particular movie. One would need a sub-genre of ‘migration movies’ to actually encompass the harrowing details of human migration that are not usually expected in a ‘road movie’.

Both novel and the movie are a savage indictment of capitalist avarice resulting in abject conditions in which the migrants work and live, enduring suffering and inhumanity. Like most great literature and art, The Grapes of Wrath generates anger and deep resentment against social injustice.

So far as internal migration is concerned, perhaps the best example would be The Grapes of Wrath with a cast of Henry Fonda and Jane Darwell. John Ford won best director’s Oscar for this masterpiece of vivid realism.

Interestingly, the 1930s American media focuses more on Hitler and Stalin and targets Nazism and Communism as main culprits that killed millions of people, conveniently overlooking the devastations caused by the Great Depression that was the result of capitalist greed. When Charlie Chaplin made movies such as Modern Times, City Lights, and The Kid, he was dubbed a ‘commie’ and a ‘Soviet agent’. In this background, John Steinbeck wrote a marvellous novel The Grapes of Wrath and brought to light the misery and melancholy of the Depression era.

Directing the movie on this novel, John Ford betrayed the climax of the book by introducing an upbeat ending that extolled the basic goodness of working people. This is the story of the Joads, a family of sharecroppers driven from their Oklahoma farm that had become a dustbowl during the Depression years. Dustbowl is an umbrella term used for an area denuded of vegetation by drought and erosion and so reduced to desert. When Oklahoma becomes a dustbowl, the Joad family migrates to California, trekking on their way to find that there is even greater poverty and even worse living conditions.

Both novel and the movie are a savage indictment of capitalist avarice resulting in abject conditions in which the migrants work and live, enduring suffering and inhumanity. Like most great literature and art, The Grapes of Wrath generates anger and deep resentment against social injustice. This brave and liberal picture was a slap in the face of Dies Committee (forerunner of the House of Un-American Activities Committee) that was trying to sniff out communists in Hollywood.

One finds a similar treatment in the 1953 Hindi film Do Bigha Zameen (two-thirds of an acre of land) directed by Bengali film director Bimal Roy (1909-1966). Roy has given the Indian cinema some of its critically appreciated movies such as Devdas, first as a cinematographer in the 1935 version directed by P C Barua, and then as director in the 1955) Madhumati (1958, with a story by Ritwik Ghatak), and Bandini (Nutan and Ashok Kumar, 1963).

Do Bigha Zameen’s story was written by Salil Chaudhri (1923-95), essentially a music composer who appears to have been inspired by not only The Grapes of Wrath but also by Vittorio De Sica’s Bicycle Thieves (1948) that was a masterpiece of Italian neo-realistic cinema. This is the story of a farmer (Balraj Sahni) who lives in a small village that has been hit badly by a famine (dustbowl of India); he is forced to migrate to Calcutta to work as a cycle rickshaw driver so that he can muster enough money to pay the local landlord to redeem his land.

Balraj Sahni, a one-time lecturer of English at Shantiniketan, finally at the age of 40 won lasting fame as the downtrodden but optimistic peasant. Just like Henry Fonda did in California, Balraj Sahni portrayed the grimy son of the soil toiling in the steamy squalor of Calcutta. Both are survival stories in which protagonists fight against all odds to protect their families.

Talking about migration and its impact on the marginalised in India, the next film that comes to mind is Garm Hawa. Directed by M S Sathyu, this story from Ismat Chughtai was also dominated by a stellar performance by Balraj Sahni. The film also featured Shaukat Kaifi (wife of poet Kaifi Azmi) and A K Hangal. In fact, this entire group had been actively involved in progressive movement especially in IPTA (Indian Peoples Theatre Association). The film is about the travails of a family of Muslim businessmen in Agra in 1947; Salim Mirza (Balraj Sahni) prefers to stay back in India, whereas his brother, sister, and their families migrate to Karachi. Mirza’s business in Agra suffers as Muslims in India are increasingly marginalised; his family goes through hardships that are beautifully portrayed by Sathyu.

Sathyu is a well-respected film and theatre professional whose play Dara Shikoh staged in 2003-04 in Delhi is considered a modern classic using Wali Deccani’s period poetry and Kathak dance to further the narrative. Now, at the age of 85, Sathyu surprised many when he backed Indian finance minister Arun Jaitley of BJP on intolerance issue and declared that the recent renunciation of awards by writers and artists was politically-motivated. This controversy aside, his film Garm Hawa remains iconic in the annals of Indian film history.

Move across decades and continents to Latin America from where people try to migrate to the North or the US. Here we may mention two extraordinary movies El Norte (The North, 1983) and Under the Same Moon (2007). El Norte was directed by Gregory Nava, who would later contribute to writing the screenplay of Frida (2001) a biopic of Frida Kahlo starring Salma Hayek.

El Norte is a simple story presented in a poetic way; two young Guatemalans, a brother and sister named Rosa and Enrique take a long trek up through Mexico to el Norte, the United States. Like most good films, it acknowledges political realities of its time and its protagonists are neither condescended to nor glorified.

The Guatemalan farmers live in miserable conditions but when they try to organise and protest, their meeting is stormed by the troops and most of them are killed or taken away. The siblings go through miles of old sewer lines full of rats to cross into the US, they succeed in reaching Los Angeles but here the ‘promised land’ is not what they expected. They work in sweat shops and contract diseases that ultimately claim Rosa’s life while her young brother ends up working in conditions not very different from Guatemala.

Under the Same Moon is the story of a Mexican family; a single mother migrates to the US, leaving her five-year old son with his grandmother. Four years on, the mother is still working as an illegal help in homes, and stitches clothes at night so that she can send money back to her son and mother. The grandmother dies and the son decides to move to the US too. On his way, he encounters numerous good and bad; narrowly escapes his abduction into sex slavery and finally reunites with his mother.

About the present migration scene being enacted in Europe, we may conlude by mentioning Eden is West (2009) directed by Costa Gavras, the Greece-born director whose films mostly examine political situations and themes, such as his most famous 1969 movie Z.

Eden is West opens in a boat carrying people from various nationalities heading towards a European beach. As the coastline appears in sight, the drivers ditch the boat and the riders jump into the sea in panic; the protagonist is a young attractive man who swims to a crowded beach that happens to cater to the nudists. From here starts his journey to Paris in all sorts of transport and with all kinds of people; worth a watch if you want to understand what people go through to reach safer and more prosperous havens.

As we have seen, most movies about migration are road movies but not all road movies deal with migration. The Grapes of Wrath and Do Bigha Zameen deal with the movement of people within a country; Garm Hawa is not at all a road movie but depicts the impact of migration as a result of division of a country on religious basis. Watch El Norte and Under the Same Moon if you want to see stark contrast between Latin and North Americas; and finally Eden is West is the closest we come to the present crisis.

Go on, get a drink of your choice with the film of your taste in one of these wintry evenings; and thank your stars that you are not one of those who end up in a boat or a ramshackle truck, not  yet at least.