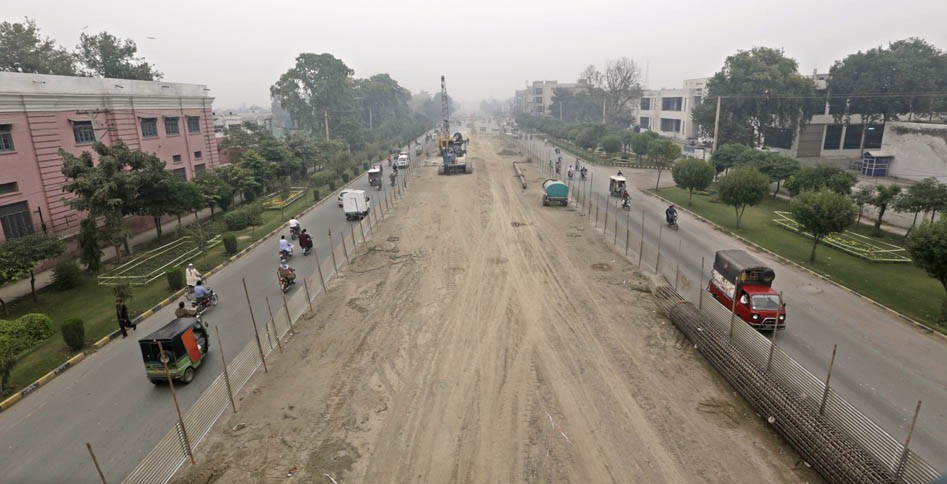 Various activists, historians, urban planning experts and members of the civil society have come out in opposition of the plan that has been dubbed by the government as a landmark mass transit project, aiming at catering to the needs of the less affluent commuters.

To be fair, at least in theory, the project sounds like a hymn to inclusive growth, ushering in an era of prosperity and development; yet, there is reason to believe that the envisioned positive outcomes may come at a heavy price for one of Pakistan’s most historically rich and culturally vibrant cities.

That the route chosen for the Orange Line includes historical monuments like Chauburji, GPO, Shalimar Gardens, Gulabi Bagh and Buddu’s Tomb has raised concerns. Organisations like Lahore Conservation Society have expressed the fear that construction will be in violation of the Antiquities Act (1975) and the Punjab Special Premises Ordinance (1985).

This, too, is happening at a time when the party at the helm of affairs feels so strongly about protecting Lahore’s history -- so much so that the Tourism Development Corporation of Punjab is taking a keen interest in looking for innovative ways to promote the city and its heritage. Projects like the double-decker bus, while it can be debated on for their utility and relevance, do demonstrate the desire to facilitate tourists and residents in exploring the city.

The ruling PML-N party received a strong mandate because of its promises of development and growth and it is expected to take decisions that aim to ensure the realisation of these goals. Hence, what is being argued against vociferously on various forms of media, is not the end goal but the means by which it may be achieved.

Even within the civil society, NGOs and various pressure groups that are protesting at the moment, there is an appreciation of the fact that improved physical infrastructure and transport facilities are basic needs of the citizenry.

"Change need not lead to a destruction of history or identity. If that was the case, then the Romans would have removed the Coliseum from the city center and put a Fawara Chowk there, instead," says Feryal Gauhar.

"This is a very straightforward issue -- like food and shelter, providing a good transport system is very important in the life of citizens. We appreciate the government’s effort of thinking about it and making it affordable. But when you do development, you have to be careful when you’re touching historical cities because they are very few and they are most invaluable," says renowned architect Nayyar Ali Dada talking to TNS.

"Development should not be stopped, but it must be done very sensitively. Sensitivity is lost if we are dominating the view in the manner that these monuments are not visible properly. So, alternate routes must be worked on even if it requires more time and money," he says.

"Things need to be looked into microscopically rather than generally. Some compromises have been made in the past -- for instance, the view of the Badshahi Mosque has been compromised in certain areas. If tolerance for such actions remains, development will overtake the character for which Lahore is famous and valuable," he adds.

Interestingly enough, Lahore has a history of being razed to the ground and reconstructed each time to conform to the whims of rulers. While this may qualify as an assault on collective memory no matter how many times it happens, the city’s fate seems to have forever been locked in a cycle of eternal recurrence.

The Mongols, the Mughals, the Afghans, the Sikhs and the British played their respective roles in reshaping Lahore and each time this happened, Lahore traded in a chapter of its past for a new beginning, a new identity.

This time around, given that the city has become home to an estimated population of nearly ten million -- a phenomenon that has created several challenges vis-à-vis managing urban growth, it will be a litmus test of the prudence and resourcefulness of the leadership as it embarks on a plan to develop modern road and rail infrastructure.

A drive around Lahore proves to be a sobering experience. One can see that the cycle has begun again: Lahore is being re-imagined, reconstructed. To a degree, evolution and embracing modernity is inevitable for survival. As mega projects look to revamp the city, palm and date trees begin to line green belts around roads, the fear that Lahore will once again cease to bear testimonials of an extraordinary journey though time is palpable.

"Of course, change is inevitable, even necessary. But change need not lead to a destruction of history or identity. If that was the case, then the Romans would have removed the Coliseum from the city centre and put a Fawara Chowk there, instead. Or the Parisians would have demolished L’Arc de Triomphe and dug an underpass there, instead," says Feryal Gauhar, activist and founding member of Lahore Preservation Society.

"Modernity grows out of the knowledge of the past -- all civilisations are built on an appreciation of what went before," she adds.

While the debate on the aesthetic aspects of the development programme seems to be elitist in nature and the masses at large, who voted for development and growth in the city, seem to be apathetic to the issue of endangering historical and cultural heritage, it is an important one.

The onus, at the end of the day, lies with the government to preserve historical monuments for the future generations. At the moment, however, it can seek solace in the fact that as far as the issue of development is concerned, the consensus is stronger than ever for the ruling party to translate its manifesto into a reality.