Representation, theirs and ours 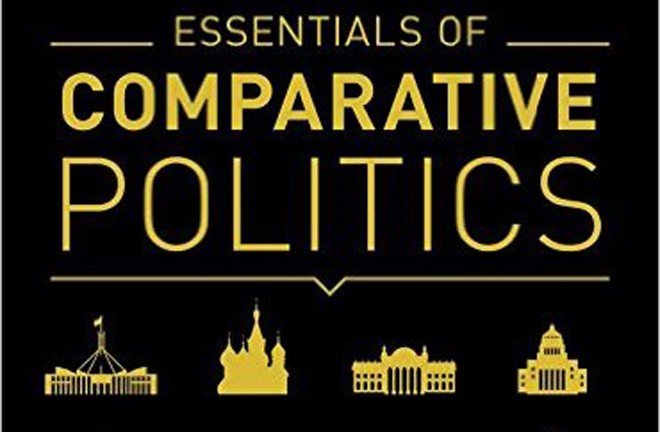 Kalian, a PTV show in the 1980s, later renamed as Putli Tamasha, was pitched as children fare. However, it was equally popular among grown ups owing to its double-edged wit. I remember a Putli Tamasha skit showing a father helping his son with Urdu lessons. In the Urdu primer in this skit, Pakistan is presented as a paradise on earth where everyone lives in peace, harmony and prosperity while the brotherhood between the people of its four provinces is exemplary. On reading all this about Pakistan in the textbook, a surprised child innocently demands, "Abba Abba mujhay Pakistan lay kar chalo" (Dad! I want to go and visit Pakistan)."

Representations are always problematic. While self-representations are exaggerated and narcissistic, exogenous delineations -- especially when politically motivated -- are equally questionable. Also, there is never an objective or neutral representation. It is with this qualification that I approach Essentials of Comparative Politics by Patrick H. O’Neil, a BA textbook. I am not sure how many universities in the world have included it in their syllabus.

However, its fifth edition in almost ten years mirrors its growing popularity. What draws special attention, in the case of any Pakistani, is the way Pakistan has been represented in the book. Unlike Pakistan’s self-representation of world’s seventh nuclear power, an Israel-style "imagined community" with a historical mission, capable of becoming world’s greatest nation (only if it rids itself of its corrupt politicians), O’Neil’s portrayal of Pakistan is rather less romantic. Pakistan appears as the introduction to Chapter 2, titled, "States". An accompanying picture, in four-colour, depicts a women’s demo against electricity cuts. One of the women holds an electric bulb in her mouth while the caption reads, "Millions endure electricity cuts for up to 16 hours a day, calling into question the effectiveness of the Pakistani state."

O’Neil raises the million dollar question, "How did Pakistan end up this way? It is quite puzzling, especially when we compare Pakistan to its neighbour, India."

Pointing out a familiar paradox that "Pakistan has been active developing a nuclear technology for military purposes", O’Neil highlights: "Pakistan is a country that literally cannot keep the lights on". Describing the oxymoronic power cuts in world’s seventh nuclear power, the author partly blames a recklessly growing population and "poor management, including the inability to collect payments". In the land of pure, "nearly half of all electricity produced is stolen."

However, electricity shortages "are emblematic of a much deeper national problem", claims O’Neil. In his view, "Outsiders often view security in Pakistan in terms of terrorism or other forms of political violence, but this impression ignores basic state institutions, like laws, roads, or education, that generate political legitimacy."

He adds: "Where weak states are unable to build and maintain these institutions, legitimacy erodes. And where legitimacy is low, a weakly institutionalized democracy can easily collapse and give way to such alternatives as military rule." The Chapter 2 in the book also contains a table listing "Top Twenty Fragile States", an index compiled in 2014. Pakistan ranks number ten on the list, only three slots below neighbouring Afghanistan. Likewise, a two-page inset, titled, "Why has Pakistan Slid towards State Failure?", claims: "Since 2001, Pakistan has been the focus of a great deal of international concern…it displays many of the hallmarks of a typical fragile state."

After mourning such familiar facts as unresponsive judicial system, powerful spymasters, Osama bin Laden’s presence in scenic valley of Abbottabad, this section of the chapter notes: "The broad problem, as numerous scholars have expressed, is that a failing Pakistani state may also be an "irrational" one." He describes irrational state as one where central authority does not exist while "different segments of the state pursue contradictory and competing goals."

The inset section is also studded with a picture displaying a banner. The banner flashing a picture of (now retired) General Zaheer-ul-Islam, states, "Pakistan Love ISI" while the caption reads, "Pakistan’s Inter-Services Intelligence (ISI) agency is viewed by many observers as directly connected to the Taliban, al-Qaida and Pakistan’s nuclear program."

Finally, O’Neil raises the million dollar question, "How did Pakistan end up this way? It is quite puzzling, especially when we compare Pakistan to its neighbour, India." Pointing out various factors responsible for the mess in Pakistan (US intervention curiously finds no mention), he highlights how the "combination of a weak state, regime and government left the military a powerful but largely unaccountable force."

His powerful conclusion deserves special attention: "Pakistan military has both grown and fragmented, increasing its control over the state but remaining unable to solidify that control into effective state capacity. At its core, the state is a monopoly of violence, but in the absence of non-military political institutions this monopoly can be just as destabilising as its absence."

Representation, theirs and ours