Never really considered at par with the more ‘splendid’ symbols of Lahore’s rich cultural heritage, Chauburji has however been the high point in the life of the middle classes based in its adjoining areas 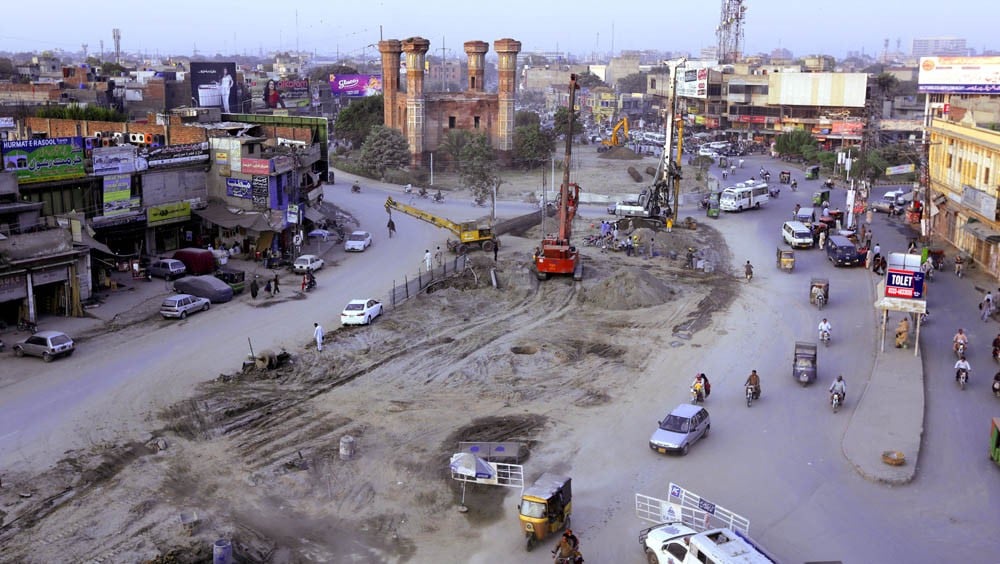 It hurts me to have to admit that my beloved, historic Chauburji monument in Lahore is jinxed for keeps.

Like many others hailing from the peripheries of the city -- Sodiwal Quarters, Ganda Nulla, Nawankot, Chauburji Quarters, Sham Nagar, and others -- Chauburji has been a friend to me since my childhood. Never really considered at par with the ‘more splendid’ symbols of Lahore’s rich heritage such as Shahi Qila, Sheesh Mahal, Badshahi Mosque and Masjid Wazir Khan, Chauburji has been the closest to what could be termed as the cultural high points in the life of the middle classes based in its adjoining areas.

A 17th-century relic, built to provide a legendary gateway to the Mughal gardens, Chauburji has since been a dream monument for everyone who could set their sight on its delicately worked arches and imposing structure.

To Chauburji boys like myself, it was our answer to Paris’s Arc de Triomphe, our St. Peter’s Basilica and our Taj Mahal. Why, then, I always thought, it was jinxed? I believe I have found an answer now.

My first acquaintance with the monument goes back to the early 1970s, and it was by no means ‘auspicious,’ so to say. I vaguely remember my uncle telling my parents -- I must be a toddler at the time -- about the ordeal of Jugga Gujjar (the legendary godfather in the vicinity) who was killed in a police encounter close to Chauburji.

Those were the good old days and every locality in the area seemed to boast its own local, Robin Hood-type bad (but benign) man who would ensure adherence to unwritten rules of law. The Chauburji youth, in those days, would look at Gujjar’s larger-than-life figure with feelings of shock and awe.

According to my uncle Nazakat Shah (who narrated the story to me while enjoying deep puffs on his cigarette), the ‘terror’ succumbed to bullet injuries near Chauburji where he had taken refuge from the police in a rickshaw. To me, back then, it was the first ‘failing’ of Chauburji towards one of its more famous, albeit notorious scions from the late sixties.

The very view that was a feast for sore eyes of the weary travellers as well as the loving Chauburji people had been blocked by alien machinery and dust and more dust.

The Chauburji boys were heartbroken at the loss of their vicarious hero. This was followed by the demise of the Budha Ravi (or old Ravi). In my early days, I used to hug my father on frosty morning walks to this derelict river bed which once rippled at the feet of the Chauburji monument. Many spiritual men, or dervishes (as we call them), would be huddled around the monument as we passed them by, wondering why the cold never troubled them. The disappearance of this old river bed in early seventies, alongside these God-fearing men was as brisk as it was ruthless.

Waters where the princesses must have dipped their mermaid feet, changed in to stinking mud pools, filled with filth. But Chauburji stood unmoved, its muffled glory completely intact.

As I grew up, the place caught my fancy for yet another reason. It was a centre point for Basant festivities in the area. In fact, it was Basant of a different kind -- not exactly kite-flying which was a luxury the Chauburji boys could ill afford. Chauburji’s heights made it an ideal location for kite looters. Equipped with long sticks, improvised from the towering Pipal trees, the boys would spend their days chasing the kites till dusk would change into darkness and their eyes turned red from exhaustion.

A large chunk of land, right across the road, was the meeting point of these kite looters who would indulge in pitched battles to preserve their colourful booty. The boys would climb the minarets in dangerous balancing acts to ensure a more successful catch, while the monument appeared to be watching over like a benign lioness looking at her squabbling cubs.

Then Basant became defunct and the vast ground famous for the festivity was replaced by a sprawling seminary. Chauburji, as you would guess, seemed disinterested and resigned yet again to its fate. Kite flying, in any case, could have caused fatal injuries, so good riddance, the sad Chauburji boys were told.

My last major memory of Chauburji has to be circa 1981. It was on August 14. The Independence Day was being celebrated in a befitting manner, for the first time in the country’s history at Chauburji Quarters, which housed the low-cadre government functionaries. The keynote event was attended by around four dozen people, most of them civil secretariat low grade employees, also including a host of Chauburji boys who were made to sit in the first row as cheerleaders, as the chief guest entered the small enclosure.

The chief guest was a complete stranger to us but the stage secretary raised our spirits when he announced, "Mian sahib [the Punjab Finance Minister]!"

And then "Main sahib" made a brief, albeit impassioned speech, the gist of which was that he had several invitations from posh areas of Lahore but he chose to come here because he loved Chauburji and its simple people. He also announced a generous grant for the area, promising to make Chauburji a shining star.

The stage secretary shouted again, "Listen up, everyone!"

I still remember the bashful face of the young finance minister who was apparently putting up with these exhortations for the first time in his life. He also shook hands with us who were to cherish the memory for the rest of our lives.

The event must have ended in less than 30 minutes and the young, blushing Mian sahib was served with samosas fetched from a local bakery in the nearby Islamia Park market. He then left in his car, escorted by just a driver and no guards whatsoever.

We ran after him, still chanting, "Mian sahib zindabad!"

It was a national holiday and Multan Road was free of routine traffic. But his car moved out slowly, much to our surprise. Eventually, Mian sahib looked out of the car window and waved to us twice. The car passed by the (now demolished) Venus Cinema which was showing a rare Indian movie, Noor Jehan. We halted briefly, as our attention strayed to the movie hoarding. As we resumed the chase, the minister’s car has vanished in the darkness of the night.

We had tried hard to catch up, as we really wanted to thank that young, handsome minister for showing his warmth to the people of Chauburji.

And then I lost touch with Chauburji for ever as my family moved out of Lahore and my job took me to far-off areas of Pakistan. All through these years, I would often wonder if Chauburji’s jinx was over. Last week, I was back, finally, but devastated by what I saw. The Chauburji Quarters’ ground where a young finance minister had delivered his maiden speech some time back looked like a monstrous piece of graveyard. My beloved Venus Cinema, where we would gaze for hours at the posters of Mughal-i-Azam had been gone, its place taken by an unimpressive commercial plaza.

With my heart beating faster, I approached Chauburji -- my Chauburji! My Arc de Triomphe, my Taj! I could not believe my eyes: It was surrounded from all sides by towering cranes and horror-inspiring construction machinery. Huge mounds of earth had piled up all around, and brick walkways were broken. The very view that was a feast for sore eyes of the weary travellers as well as the loving Chauburji people had been blocked by alien machinery and dust and more dust. The ‘uchay burj Lahore dey’ had been forcibly humbled by the mysterious presence of an elevated expressway, supposed to run the Orange Line Metro train. The jinx was still there, except that it looked likely to stay for ever this time around. I shuddered at the thought that Chauburji would no longer be visible from a distance as it had been for centuries.

Renowned 20th century Urdu essayist and humourist Khwaja Hassan Nizami once wrote about the 1857 trouncing of the Mughals. He talks about a Noble lady who was found wailing at the doors of the Red Fort, "Aey, koi Humayun aur Shahjehan ko ley aye!" (Can anyone bring back emperor Humayun or Shahjehan to save us?). I could almost envisage Princess Zaib-un-Nissa, Emperor Aurangzeb’s accomplished daughter who had built the majestic Chauburji monument in the 1640s, crying in its dust-covered arches, "Aey, koi uss minister ko ley aye!" (Please bring back that young minister who loved this place like no other).