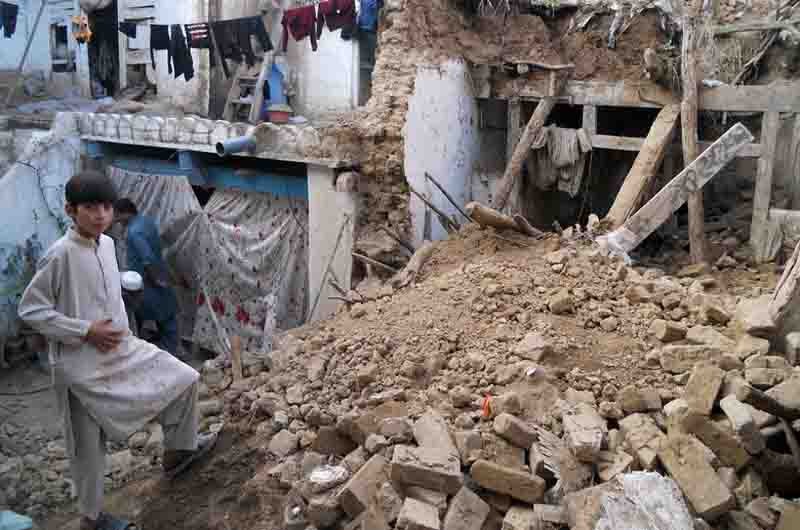 Muntaha Masoud, now 25, has hard memories of 2005 earthquake when she was only 15 years old. She cannot remember how it all occurred then, except when she realised that all her body was under debris. Only her face was out while her teachers were trying to rescue her carefully so that her body could be protected from further injury or harm.

In 2005, Masoud was in ninth grade in a local college in Muzaffarabad. On October 8, she was sitting in the first row of her class, next to the wall that fell on her. "There was a strange sound, and everything had smashed. The wall had fallen off; I was sitting next to it," she says.

She was unable to comprehend what was happening as she was traumatised. "I had no pain, but I was scared. There were continuous aftershocks and I panicked so much that it still shatters me whenever I think of it," says Masoud.

Masoud has fear of all occurrences of the 2005 earthquake. She recalls her bare feet walk towards her home when she had to step on human flesh. "I still dream about the incident sometimes, and I can’t explain the fear I had at the moment," she says.

She has developed nyctophobia: she can’t stay in the dark for more than a minute. "I start suffocating. It’s a psychological effect."

On October 26, 2015 she again felt that she was left alone in this world. She lives in Islamabad away from her family now. "This earthquake has reminded me of all the agony that had occurred in 2005, all the pain -- the entire trauma."

The earthquake on October 26, 2015 revived the painful memories of thousands of other victims of 2005 earthquake. There has been a huge impact on her family too. All the memories revived for her cousin, "The moment I felt tremors, I could sense the fear of 2005 earthquake," says Dr Munazza Nazir. Out of fear, she shouted to the people nearby to stay away from the building, dreading that it may fall.

"The doors, pillars and the building started to shake just like what happened in my school, back in 2005," says Masoud. She wanted to stop the earth, do something which could stop the earth from shaking but was helpless.

She wanted to speak to her mother, but the number won’t connect. It was only after 30 minutes that she found out her family was safe. "She had turned blue, she was in panic, walking here and there, and not listening to what we were telling her," says Farah, a roommate of Masoud.

"The government needs to respond immediately and instantly. If there’s a slow response, it can create more psychological issues," says Dr Niaz, Director for Psychiatric Clinic and Stress Research Centre in Karachi.

Anisa Nazir, 45, felt a similar reaction. She had relocated with her family to Abbottabad from Muzaffarabad after the 2005 tremors. "We finally came back in March 2007, after almost one and a half year of the earthquake," she says. She had rebuilt her house and started living in it since then. She had almost forgotten the cruel memories of 2005 earthquake, when this earthquake hit again. "There were screams and cries from everywhere. I thought it is the same thing happening again. I started looking towards sky as if everything will fall again," says an emotionally-charged Nazir.

She has two children, and both had received injuries in 2005. Her fears have re-emerged. She can’t sleep at night anymore and doesn’t know when this fear will go away.

Similarly, a study published in Pakistan Journal of Psychological Research in 2010 also indicated that the amount of psychological stress among earthquake survivors was high. It urged delivery of mental healthcare to disaster victims. There are a number of people feeling the trauma, however there is little understanding to deal with it.

Sohail Babar, 35, who runs a college in Muzaffarabad, was sitting in his office when the tremors hit Pakistan, Afghanistan and parts of India last week on October 26. He saw people running out of fear, jumping out of buildings and heard hue and cry from everywhere. "I thought everything is going to happen again, which occurred in 2005," says Babar.

He ran towards his home to find his children, spouse and parents in trauma again. "We started calling our relatives," says Babar, but the cellular services were not available. "It further increased the panic," recalls Babar.

Mubashar Nabi, who was engaged with an international relief organisation in 2005 feels the incident has revived the memories of 2005. But he finds the role of media rather irresponsible. "They displayed similar pictures and visuals which further terrified many people," says Nabi. The visuals of wreckage and havoc made many go through trauma.

Dr Unaiza Niaz, director for the Psychiatric Clinic and Stress Research Centre in Karachi, finds it to be a complex trauma which is actually a revival of all memories. "It brings in similar feelings and thoughts, encompassing everything which occurred to people in the past."

She says that every disaster leads to a high percentage of stress reactions including PTSD. According to her, Pakistan has gone through a severe earthquake in 2005 and the survivors of this trauma have a high rate of PTSD syndrome. She believes that the lack of adequate trauma experts further increase the sufferings of victims.

"The government needs to respond immediately and instantly. If there’s a slow response, it can create more psychological issues," says Dr Niaz. "The psychiatric sequel of this earthquake can be far more deleterious than the past earthquake and immediate psychosocial health and involvement of trauma experts is urgently needed."