Our house in London

A controversy recently erupted with reports that the Pakistan High Commission building in London was up for sale to the highest bidder but soon it died down, leaving a lot in the grey 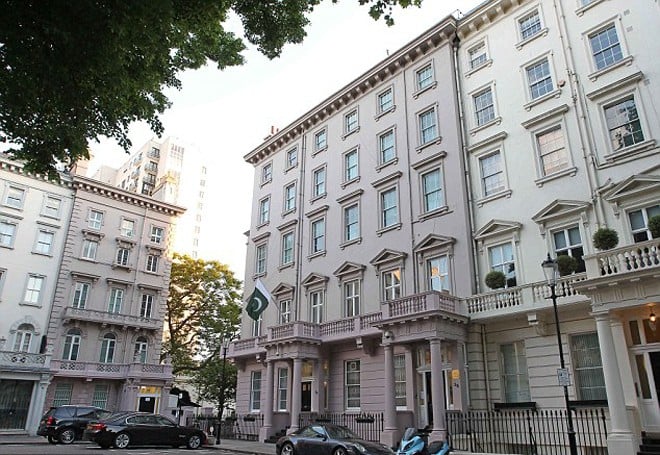 For most people, London’s Knightsbridge is eponymous with luxury shopping, ultra-expensive residences and non-doms willing to spend whatever it takes to live the dream. Sure, the area carries a lot of clout and is a shopping mecca but for Pakistanis living here, it is synonymous with a home away from home.

The place means Pakistan for them. It is a home to lots of events around Pakistan. Pakistani dignitaries and senior military and civilian government figures are hosted here. For dozens of political and religious Pakistani groups based in the UK, this is the preferred place for protest and agitation too.

The Pakistan High Commission in London, as the name suggests, is a diplomatic mission stationed in the UK to look after the interests of its citizens in the host country. So, with a burgeoning population, exceeding 1.15 million, and forming the second largest ethnic minority in Britain, there is inevitable clamour and interest in its sale.

Or, at least, when such rumours are adrift.

Everybody unanimously agrees that disposing of the prestigious cultural heritage would be an act of imbecility but with property prices soaring in London, it would be a financially destructive decision too -- given the building was bought for £6million and is now worth well over £200million.

Speaking to The News on Sunday, Wajid Shamsul Hasan, former High Commissioner to the UK, explained how prior to his retirement he had commissioned a survey which valued it at approximately £200million. "The exponential surge in value of this building is just amazing. This building is our national treasure and there can be no substitute for it," he adds.

Pakistan High Commission’s Chancery Complex located at 34-36 Lowndes Square plus two mews houses on Harriet Walk behind building 34 are at the heart of this controversy. Allegedly, the foreign ministry gave Prime Minister Nawaz Sharif a presentation earlier this year in June, regarding the sale of the building when the PM issued directives to a committee to explore the possibility of selling it to a commercial entity that could use it as apartment blocks or for any other commercial activity.

In the event of a sale, suggestions were also given to use the proceeds to purchase a new building in diplomatic areas such as Belgravia or Eaton Square, and further extensions in the Mission were prohibited until a decision was made. The committee was supposed to report back in 90 days.

Chairman Privatisation Commission, Sir Anwar Pervez of Bestway Group and Sultan Allana of the Aga Khan Foundation were nominated to coordinate the efforts.

Pakistan has consulates in Bradford, Birmingham, Glasgow and Manchester.

But Hasan dismisses this as a conspiracy. "It is regrettable to read that newspapers are once again conspiring to deprive Pakistan of its prestigious High Commission buildings," he laments.

He says he would like to believe that Prime Minister Nawaz Sharif does not plan to sell these buildings. "When I received him at the airport a few months before the elections in 2013, he enquired if the Mission buildings were rented. He was pleased to know that they had been bought, however, he was visibly displeased when informed about the sale of the High Commissioner’s residence in St Johns Wood by his predecessor, the late Riaz Sami."

Hasan reminisces how the former Prime Minister Benazir Bhutto had encouraged him to acquire the High Commission building at all costs during his first term in 1994-1996, in spite of several bureaucrats opposing the decision. The bidding started at around £24 million for the property but after concerted efforts and negotiations with the vendor, Sun Life Assurance Society plc, the property was bought for £6 million pounds.

"It is worth mentioning that in the entire affluent enclave, these were the only properties that were freehold at the time, and the rest had lease for 99 years or less and that the current market price of the two mews houses alone is worth £70 million," he adds.

Hasan disclosed that Sami had almost finalised a deal to sell the building and acquire a new place in Marble Arch in 1994, however, last minute intervention by the then foreign secretary, Shahryar Khan and a payment of £120,000 by the High Commissioner prevented the sale revoking the agreement.

However, speculations are rife about the building’s origins with some claiming that it was a gift from Prince Aga Khan III of the Ismaili community to the government of Pakistan in 1947. The presence of Sultan Allana as one of the special committee members of the Aga Khan Foundation gives credence to the claims -- but land registry documents, as seen by TNS, make no such mention. Land registry documents state that registered owner of these buildings is the government of Pakistan and the ‘lender’ is Pakistan International Bank (UK) Ltd.

Nonetheless, by mid-1996, the Pakistan High Commission had purchased their own building, with the luxury department stores including Harrods and Harvey Nichols as their neighbours and diplomatic presence all around in one of the most exclusive and expensive areas of London.

Planning permission for additional construction around the lawn was sought by the High Commission from Royal Borough of Kensington and Chelsea in 2002 as it anticipated a shortage of space as verified by documents seen by TNS.

"Since Benazir Bhutto’s dismissal in November 1996, expansion plans remained on hold, however, when I was reappointed, Prime Minister Yusaf Raza Gilani sanctioned $1million for the construction of a state-of-the-art Consular Hall and a 300 seating capacity auditorium name after our country’s founder, Jinnah," Hasan elaborates.

Syed Ibne Abbas, the incumbent High Commissioner to the UK, reiterates similar sentiments saying: "In the best national interest, the government decided to carefully examine the options of either going ahead with constructing a new community hall or relocating the Mission to a more spacious building. A high level committee was constituted by the PM to evaluate various options and the committee has already submitted its report to the PM’s Office."

Press Attache and Pakistan High Commission spokesperson Muneer Ahmad also denies any plans in place to sell the building. "We are short of space at the moment and plan to build a new block which will have a consular services hall and a community hall to organise community events and social gatherings."

Ahmad adds that they understand that the Pakistani community has an emotional attachment with the current building and selling it is not an option.

TNS sent questions -- and reminders -- to the Ismaili centre in London and to the Agha Khan Development Network but no answers were provided. It is for certain that the Ismaili community has a crucial role in the acquiring of this building and has a role in its current legal status -- but it seems the community doesn’t want to hug publicity for doing a great service to Pakistan.

A source in Pakistan High Commission, speaking anonymously, confided that the government of Pakistan cannot afford to sell the PHC buildings. He says anyone who tries to sell these historic buildings will be challenging the nationalist sentiments of the nation. "The public will not let anyone sell these properties. It’s simple."

Our house in London