Exploring the streets of Quetta

Satirists Murtaza and Faysal Chaudary tap into their serious side with Quetta - A City of Forgotten Dreams, scheduled to release early next year 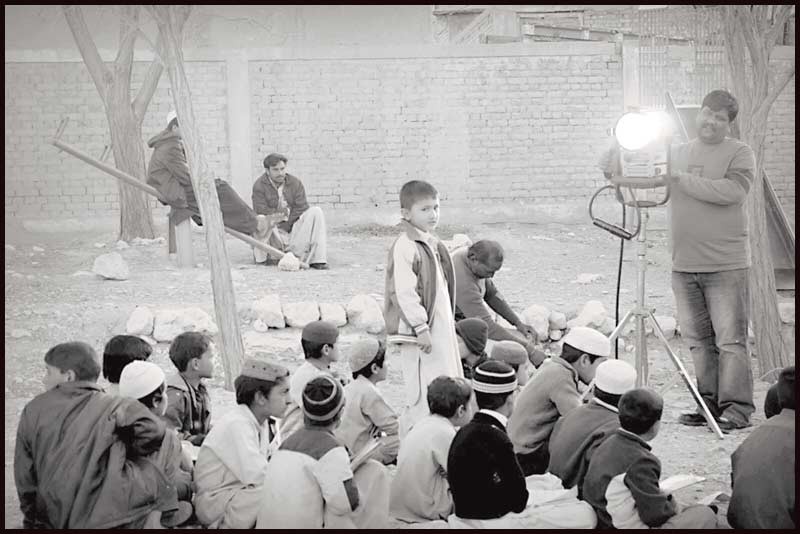 Satirists Murtaza and Faysal Chaudary tap into their serious side with Quetta - A City of Forgotten Dreams, scheduled to release early next year.

Pakistan’s cinema industry is in a great, experimental phase. Films like Manto, Jawani Phir Nahi Ani, Bin Roye, Wrong Number, Shah, Moor and Dukhtar are nudging the industry towards a full-fledged revival of sorts. On one hand movies like JPNA and Wrong Number have successfully pulled the crowds back into the local cinemas; to some extent they have also solved the financial puzzle for producers. On the other hand, movies like Moor, Manto and Dukhtar have proven good enough to satiate the appetites of art/drama lovers in the country. The year 2016 is all set to raise the bar of artistic films even higher, with the release of Quetta – A City of Forgotten Dreams, which is being directed by Murtaza Chaudary and Faysal Chauhdry. If these names ring a bell it’s because they have been entertaining us for years with political satire, first on the Four Man Show and then BNN. With comedy as their mainstay, it’s both intriguing and interesting as to why Murtaza and Faysal have stepped into Quetta, to celebrate the desolate city’s unsung heroes.

This isn’t the first time that Balochistan has come under the cinematic limelight. Always under the radar for sectarian violence and bad governance, it’s only natural that the province has become a natural subject for filmmakers with an interest in Pakistan’s active politics. Jami’s widely appreciated Moor depicted the beautiful yet barren province and one cannot forget Hashim Nadeem’s Abdullah, starring Imran Abbas, which was based on the Kharota-Baad incident of Quetta. With politics running deep in their veins, it wasn’t a long shot for Murtaza and Faysal Chaudary to venture into Quetta too.

"We have an emotional attachment with Quetta; we have spent our childhood there and we surely know the talent which this city has," Murtaza spoke to Instep about his film, adding that he wanted to show the world the real face and rich history of Quetta. He wanted to celebrate it rather than cast it in harsh light.

"We cannot make great players like Ronaldo and Roberto here due to limited resources," he added, speaking of the sporting talent that the city has, "but we can portray our local heroes in a way that they become motivational for us all. Terrorism has killed the dreams of those in Quetta and we wanted to show how many unsung heroes are still walking in the streets of this city, unnoticed, everyday."

Quetta – famously known as the ‘mini London’ of Pakistan due to its weather and beautiful landscape, is obviously the nucleus of the film but the story is inspired by the famous Kurdish movie, Turtles Can Fly by Bhaman Ghobadi, and revolves around four essential characters. One of these characters is a football lover and another is a labourer who works in the wretched coal mines. He wants to break out of pitch darkness and explore his avenues but is stuck in believing this to be his destiny, just as it has been his forefathers’ for generations.

"We didn’t want to cast professional actors to play the roles," Murtaza spoke about the casting, adding that one of the characters was being played by Asal Din of Dhuwan fame. "We wanted to have strong characters that brought more intensity to the story and searched for random children whose getups were more like Afghani, Iranian and Kurdish people."

Cinematography will play a great role in the movie, Murtaza revealed. There are some great shots within the city including Marri-a-Bad (a densely populated Hazara community), Spin Karez (outskirts of Quetta) and Kan Mitar Zai (region of District Zhob), all of which explore the unseen sights of Quetta and Balochistan and will undoubtedly be insightful as Balochistan is barely accessible to the average tourist anymore.

"It was very encouraging to have the support from locals living there while shooting in the cold and breezy nights of December," Murtaza speaks about filming. "People came and provided us heaters and other accessories to keep us warm and it was the commoners’ love and support that kept us going and motivated to finish what we started." Sana Bucha also played a pivotal role in the making of the movie.

"When we shared the idea with Sana Bucha, who is a dear friend, she got really emotional and promised us her complete support and it is her support and dedication that we are able to complete the project," said Murtaza.

According to the director, Martyrs Dream was the initial name decided for the movie, as it has sacrificed the most in the war against terrorism, but they had to change the name keeping the target audience in mind. "Quetta has a different ideology; its culture and living standards are completely different from the rest of the country and we wanted to showcase it in a different way," Murtaza said. "There is no item song or commercial entertainment in the movie and we will be happy to have a few viewers, but greater appreciation," he added.

While Murtaza is in the director’s seat, Faysal - his brother - is the writer of the film. While talking to Instep he revealed how the movie was multi-lingual and liberally communicated in Persian, Pashto and Balochi with most of the dialogues in Urdu.

"I knew exactly what the dialogues should be, keeping in mind the special accent of Quettians, which in my observation attracts a lot of people," Faysal Chaudary pointed out. "The only difficulty we had is that we haven’t written anything serious before!"

The trailer of the film is already out and with a million hits already under its belt, Quetta - A City of Forgotten Dreams has piqued the interest of the people. "The appreciation we have received since the release of trailer is overwhelming," Murtaza confirmed. "Jami has supported our movie and has guided us throughout."

The director is very optimistic for movie’s success and is confident that Quetta will do better than most of its predecessors in the art genre. The movie is slated for a January, 2016 release and while only time will confirm its success, our expectations do run high and we wish the team the best of luck.

Exploring the streets of Quetta