There’s something very special about Mahira 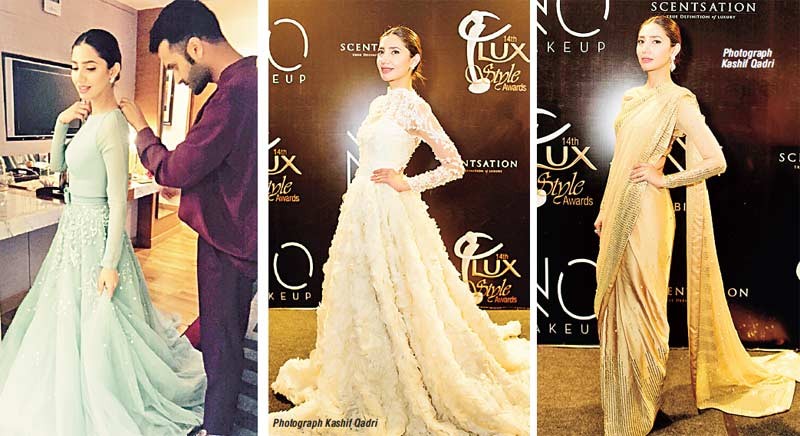 Doesn’t dressing up celebrities (as a career) sound like the best profession on earth? Working with someone as chic as Mahira Khan, especially, can safely become a dream job and that’s exactly the way Amar Faiz feels as Mahira Khan’s wardrobe stylist.

We caught up with the suave celebrity stylist Amar Faiz, whose client list includes some of the biggest names in international fashion and we are talking everyone from Kylie Minogue to Iggy Azalea and tons of other red carpet regulars, to find out his experience of styling the Lux Lady, Mahira Khan at the Lux Style Awards 2015.

Instep: First things first, can you please elaborate what a wardrobe stylist’s resume looks like?

Amar Faiz:  A Wardrobe Stylist is one of the most popular emerging professions in the fashion world globally. It is someone who understands the client’s style sense, sources and selects the clothing and accessories for his or her campaigns, shoots or public appearances. He helps a client define his or her personal style and choose different outfits to suit that style. It’s a common concept around the fashion world but it’s fairly new in Pakistan.

Instep: So you chose all the stunning outfits that Mahira wore at the LSAs?

AF: Well no, she had the final word on the dresses. But I had shortlisted them, based on the discussions we had about the look that she wanted for the big night. Plus, we both wanted something international and exclusive. A stylist’s job is to make the star’s life easier by short listing the hundreds of dresses for consideration. And if the star is someone like Mahira Khan, then more and more designers want to dress her up. Hence, it makes the selection process much more difficult. And this is where a stylist plays a major role.

Instep: How did you manage to get international designers on board?

AF: I have been in this business for the last 13 years and have developed a network with international designers and PR companies. My aim was to introduce Mahira to a different region and to create her international profile. So when Mahira and I had a discussion about the different looks she wanted for the LSAs, I liaised with the fashion designers based on her requirements. I shared Mahira’s portfolio with them, which was very well received. She has significant presence on social media; Twitter, Instagram and Facebook fans number in millions and that says a lot about her profile. Social media following is also one of the barometers to assess a star’s popularity. And Mahira Khan is already on her way to be the biggest star that Pakistan has ever seen. She is taking the right steps, doing the right projects and with the right people. There is nothing that can stop her.

Instep: How many dresses were shortlisted for Mahira? And what was the story behind the ice-blue dress by Georges Hobeika?

AF: We short listed at least 35 dresses before she confirmed that one. It had to be special as she had to attend the red-carpet in that dress plus she was opening the show as well with that one. And finally she picked Georges Hobeika, the Lebanese Haute Couture designer who has dressed names like Jennifer Lopez, Selena Gomez, Katy Perry, Hilary Swank etc. For many months she had been receiving a lot of attention from several Arab designers and they had shown their interest in her.

Instep: How did a sari make way amongst the gowns? I mean the beautiful Feeha Jamshed creation?

AF: Honestly, it was very last minute. Mahira wanted to go for another change before sliding into another gown. But the clock was ticking and we just had a few days before the show. We had a Chinese designer’s exclusive creation as backup which was a black gown but Mahira wanted to wear something eastern to balance her multiple appearances. So we checked with her friend Feeha Jamshed, whom she trusts completely and time and again she has donned her creations. I personally love Feeha’s sense of style. We know each other since 2006 and I knew we could count on her. She was kind enough to agree and delivered within a week. That’s how the sari happened. I think she looked fabulous in that.

Instep: What about the swan-white grand finale dress?

AF: That white one was a tough call. Actually, Mahira had shortlisted a Brazilian designer’s creation but when I checked, that dress was reserved for Giuliana Rancics (from E-Entertainment) for an event that was scheduled two days before the LSA night. Even though the designer insisted to send it across to Pakistan but I did not want to stress out as it would have been a close call. So logistically it was not feasible. So I whatsapped around a dozen images to Mahira to select from and she chose this beautiful runway creation by Cecilie Melli. But to make it event appropriate I suggested adding Chantelle lace to the upper part of the dress and it was especially customized for Mahira.

Instep: And how did they arrive from different part of the world to Pakistan?

AF: I got all the dresses couriered to Norway where I live and then brought them along with me to Karachi. The best thing about all these designers is that we did not have to do any alterations after the trial. Each dress fit her like a glove. Plus Mahira was extremely comfortable in each, which matters the most.

Instep: Will you be collaborating with Mahira for her future projects?

AF: I have known Mahira for a long time and I was supposed to collaborate with her for her Bin Roye appearances around the world. But it took me a while to sort things out and I missed the bus. So I thought to start off with the biggest event in town, the LSAs. But my association with her is not going to be a one-off. We see a great deal of synergy here and I will continue to be her wardrobe stylist for her appearance for Ho Mann Jahaan and Raees.

There’s something very special about Mahira