Rickshaws: Now a vehicle of empowerment 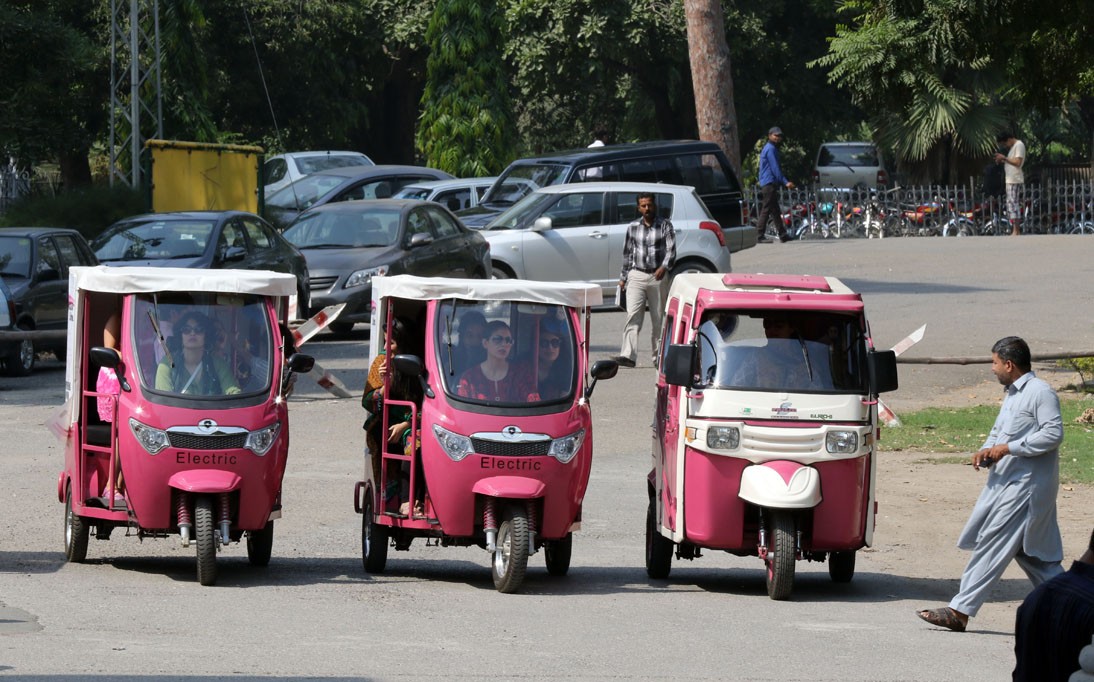 For Pakistani women, entering public domain has always been an uphill task, and a constant struggle against the odds. Over the past decade and half, though, it seems greater employment opportunities are being created for them and policies being made that readdress the issue of gender balance in fields previously considered men-only.

Today, for example, women are far more visible in the customer service industry, dealing with the public and, in the process, finding acceptance for themselves. We still receive the news of Pakistan’s ‘first’ female pilot or, as one saw recently, the ‘first woman truck driver’ with a sense of awe, if not shock. All of which proves the fact that we may still be far from seeing it as a norm.

The media’s latest buzz is to do with at least two such ‘awe’-inspiring, if not novel, initiatives that have been launched in Lahore. Interestingly, both seek to afford possibilities of income generation to women by taking them straight to a territory they aren’t known to have treaded -- that of driving a rickshaw for the public.

The first of these, catchily named Zeenat Gari, is a collaborative project of the Coca Cola Beverages Pakistan Limited (CCBPL) and SeedOut, an NGO. Its launch, recently, courted controversy as Zar Aslam, the CEO of the Environmental Protection Fund EPF), took to Twitter slamming the initiative.

Aslam, who had an eerily similar project out early this year by the name of Pink Rickshaw, lashed out at the CCBPL officials for stealing her idea.

Zar Aslam tells TNS that she was constantly talking to the CCBPL regarding collaboration but it didn’t work out. Less than two weeks before the Pink Rickshaw’s official launch, the CCBPL had made its own version public.

On the flip side, women- driven rickshaws have generated a debate about such initiatives as causing further segregation instead of addressing it.

Zafar Abbas Jafri, Director Public Affairs and Communications, CCBPL, appreciates Aslam’s initiative. However, he says that since they couldn’t come to an agreement on the terms and conditions, Aslam backed out. "As a sponsor, we had the right to choose who we’d partner with," he says.

"Zar didn’t have the intellectual copyrights on the concept as women-only transport is a global idea and pink taxis have been operating in Dubai and Egypt for some time now."

The blame game aside, the objective of both initiatives is worth celebrating, as it is meant to empower women in public space and make them financially independent. As Aslam puts it, Pink Rickshaws are "geared towards enabling women from low-income households to earn on their own and become self-sufficient."

As for Zeenat Gari, Abbas says, "the concept of women-driven rickshaws is aligned with our global initiative to empower five million women by the year 2020. We wanted to introduce it in Pakistan as rickshaw is mainly a male domain."

Interestingly, both the campaigns have chosen for bright colours -- whereas Zeenat Gari is painted in the traditional Coca Cola colours of red and white, Pink Rickshaw is, as the name suggests, pink but also white.

When quizzed, Aslam says there was no particular reason why she decided to go with pink. "It could have been purple," she insists. "But pink came to my mind first, so I said fine."

Abbas sounds more authoritative. He says the choice of the said colours was made keeping in view the security of women drivers. "We’ve taken the local traffic police on board, as it is very important that the rickshaws are identifiable.

"Zeenat Gari comes fitted with a panic button and can be tracked via GPS. So, if the driver is in trouble, she can immediately seek help. The colour red should alert the police instantly."

On the flip side, women-driven rickshaws have generated a debate about such initiatives as causing further segregation instead of addressing it. The popular misconception is that these rickshaws shall only facilitate female passengers. Aslam is dismissive of any such notions. "If anything, they should discourage segregation because we are not saying that men cannot sit in these rickshaws. All we’re saying [to the women drivers] is that they need to be careful when they take a rider. Use common sense!

"I’d even say that if you can’t see a woman’s face, if she’s wearing a niqab (veil), or if you feel uncomfortable, don’t give her a ride. Period."

Abbas also rejects the segregation part. Though Zeenat Gari drivers will be operating under the stipulation that they cannot give a ride to men alone, they can take couples or families. "Our objective was to change how women are perceived in public space," he adds. "So, the first step was to change the perception that women can’t do a man’s job. Zeenat Gari, to my mind, will go a long way in doing that."

Pink Rickshaw, available with either the battery or petrol option, costs Rs0.3 million while the petrol-powered Zeenat Gari is priced at Rs0.25 million. Both initiatives not only offer rickshaws on easy installments to deserving women, the said price also covers training and license fees as well as the cost of sorting out any legal matters with the local government. Both are non-profit ventures and only the costs are added to the final sale price. Ultimately, once the installments are paid, women will become the owners of their rickshaws.

Design wise, both rickshaws are custom fitted with side doors, fans, and latches. The doors have been used keeping the security of women in mind. But the Pink Rickshaw has the option for the drivers to go without the side doors. "We have asked the manufacturers to put bigger and thicker bolts on the doors," says Aslam. "So, as and when the woman feels comfortable, she can take off the doors and drive it; she can always put them back on in the winter if she wishes."

The need to attach doors is a stark reminder of how far women still have to go before they are really accepted in public space. Today, many women either cover themselves up while travelling in public transport, thereby hiding themselves from the male ‘gaze’, or they travel in private vehicles, often driven by a male escort.

While Zeenat Gari has the funding might of CCBPL behind it, Pink Rickshaw is Aslam’s personal initiative, taken with the help of her family and friends. Currently, five rickshaws have been launched in Lahore by each campaign. Plans for expansion depend on their success. Though no exact date is set right now, both Aslam and Abbas are hopeful the Lahoris shall be pleased to see these colourful vehicles once they start plying on the road.

The article has been changed to reflect the correct name of Zafar Abbas. The error is regretted.

Rickshaws: Now a vehicle of empowerment