Despite a paucity of funds, the Faiz Cultural Foundation manages to pull a sizeable crowd in the city annually, bringing here speakers from Pakistan 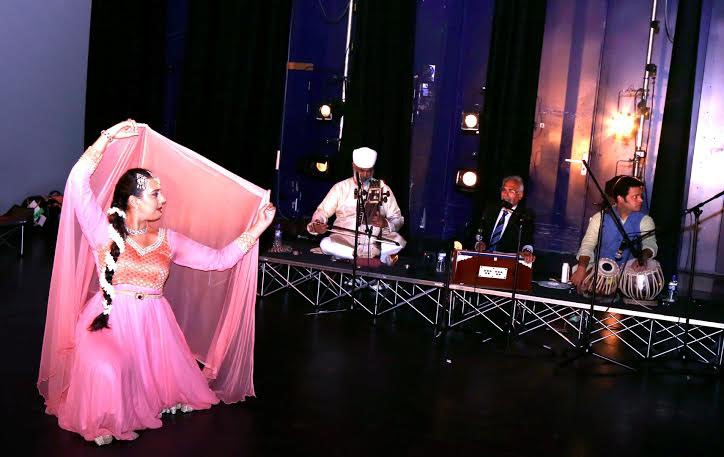 On October 10, at the fifth Faiz Amn Mela, London’s Stratford Circus and Arts Centre was beaming with Faiz Ahmed Faiz’s images. As the evening descended, the venue was filled to the brim with an enthusiastic crowd. In a 400-strong gathering, one could spot curious youth as well as grey haired leftists. While Muneeza Hashmi and Adeel Hashmi represented Faiz’s family, keynote speaker was ANP leader, Mian Iftikhar Hussain.

British Labour Party’s new leader, Jeremy Corbyn and his team sent an apology a day earlier as he was away from London due to his party engagements.

Held for the fifth consecutive year, Faiz Amn Mela under the auspices of Faiz Cultural Foundation (FCF), was initiated to mark Faiz’ birth centenary in 2011. Over the years, London’s Faiz Mela has been institutionalised. A small but dedicated FCF continues meeting, raising funds and planning Faiz Mela round the year. Despite an utter paucity of funds, the Foundation manages to pull a sizeable crowd in London and bring speakers from Pakistan annually. "In fact, the crowd this year was not as huge as the previous years," an organiser said. Attendees had arrived not merely from other UK towns, but overseas too.

Hardly anybody -- save the tense organisers -- arrived on time for the opening of the mela. It began an hour behind schedule. First of the two sessions was devoted to presentations of papers and lectures. In his welcome speech, FCF General Secretary Nadeem Saeed defended the idea of holding Faiz Mela in London, away from Pakistan. Saeed argued that a growing radicalisation of Pakistani community in the UK could only be countered by mounting progressive institutions and popularising enlightened counter-narratives.

It was not odd to hear Saeed mourning the fact that building of a mosque or madrassa is celebrated by Pakistani diaspora, but celebrating the Faiz Mela is seen as an awkward Pakistani legacy. Diasporic discourses and actions often mirror the politico-cultural atmosphere in the home country. Since a confessional shift has occurred in Pakistan, diaspora has also grown beard. It is in this context that the annual event in London appears awkward. It does not conform to the mainstream in Pakistan. This confusion marked the proceedings of the mela’s first session.

While Faiz’ grandson Adeel Hashmi and PTI leader, Justice (retd) Wajih-ud-Din, in their self-contradictory harangues were indeed out of step with Faiz Mela’s spirit, highlight of the event was Mian Iftikhar’s electrifying extempore speech.

In his witty manner, he pointed out that Faiz spoke of poverty. However, Faiz’s appropriation by middle-class, of late, has denied the poor of the only thing they had: they could speak of poverty but even poverty is now articulated by the rich people!

It is appreciable that Pakistan High Commission has lent its co-operation to Faiz Mela in London since 2011, but it would be advisable to send a knowledgeable representative to such an informed gathering.

He established the link between Faiz’s message of peace and Bacha Khan’s philosophy of non-violence. He went on to highlight the practical importance of these philosophies by narrating his experience as ANP minister of information. Mullah Fazlullah passed him threats in his radio sermons. His son was assassinated. The funeral of his son was targeted by the Taliban suicide bombers. "I swear to God, we did what we preach," he answered back to Justice Wajih without naming the latter.

In his speech, Justice Wajih had mourned the fact that the actions of politicians did not match their claims. In his subtle manner, Mian Iftikhar drew the attention of PTI leadership to their contradictions: "Meray bachay diar-e-ghair may rahain, may mulk may inqlab laon ga! (I will lead the revolution in the country but my children will live abroad)".

He left the podium amid a standing ovation while many would have felt a saltish lump in their throats when he departed the stage.

Earlier, Muneeza Hashmi presented her paper, Faiz As Father: A Daughter’s Memoir. Since its launching in 2011, each Faiz Mela has been graced by one of the two daughters of Faiz. Her paper documents countless anecdotes as well as Faiz’s daily routines. The paper deserves wider circulation and attention.

Yet another highlight was Ashfaq Hussain’s lecture. A noted Urdu critic and author of four books on Faiz, Hussain grounded Faiz’s poetry in Pakistan’s troubled history. "While Faiz’s poetry is great merely because of its aesthetic value, it also offers a framework for narrating a counter-discourse on Pakistan’s history," he argued.

There were of course moments of respite too at the mela. For instance, a representative of Pakistan High Commission was booed out. First, he tickled the huge crowd into a loud laughter when in his speech, delivered in chaste English, he urged the participants to promote Urdu. Later, he began to blow hot and cold about Faiz’s poetry.

It is appreciable that Pakistan High Commission has lent its co-operation to Faiz Mela in London since 2011, but it would be advisable to send a knowledgeable representative to such an informed gathering.

A spirited first session was followed by a lively and highly entertaining cultural evening. FCF president Ayub Aulia, an authority on Pakistani music, was the architect behind the cultural show. While Aziz Ibrahim and Dilbir Singh Rattan with their combination of tabla and guitar were magical, Nikita Thakrar’s kathak dance performance on Faiz’s verses was mesmerising. Jamal Akbar sang ghazals while Sira Peter enthralled audiences with Shah Latif Bhittai. It would be a miss to not mention the two highly articulate anchorpersons, Dr Rehman and Asim Ali Shah. Perhaps news channels in Pakistan should deploy them as trainers for their screaming anchorpersons.