"Pakistan has a complex linguistic demography" 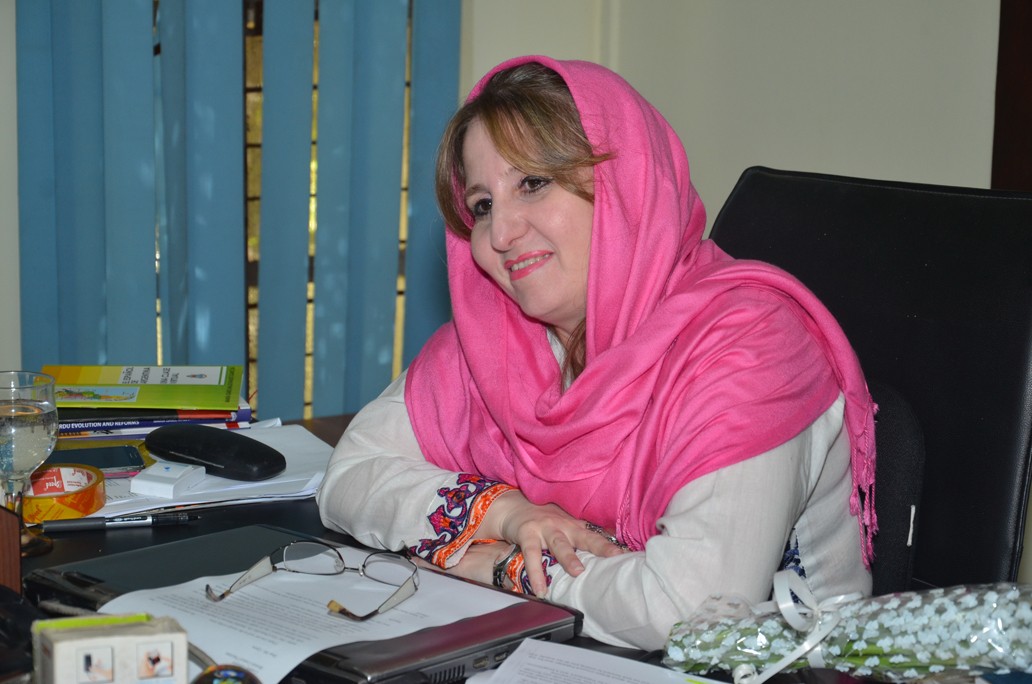 Unassuming, warm, and intelligent -- these were my first impressions of Dr Maria Isabel Madonado Gracia, Assistant Professor in Spanish Linguistics, when I first met her on the launch of her recent book "Urdu Evolution and Reforms". The love for Urdu coming from a person with Spanish as her mother tongue, led me to request her for an interview which she graciously accepted. Proficient in English, Spanish, and Urdu languages, Dr Garcia completed her PhD from Universidad Nacional De Educacion A Distancia, Madrid, Spain in 2013.

Apart from her academic responsibilities, she has been playing a major role as the Director of External Linkages, Institute of Languages, Punjab University since 2009 in keeping an effective relationship between PU and educational institutes in other parts of the world in terms of gaining access to new knowledge and technologies, devising strategies for admission of students in international universities, and organising collaborative cultural events and educational programmes. She boasts of a successful career spanning over 15 years at prominent institutes such as Kinnaird College, Berlitz Language Institute, Lahore Chamber of Commerce, and Aitchison College.

During her professional career, she has also remained responsible for Prime Minister’s MoUs with Chinese Universities and President’s Program of Highly Qualified Overseas Pakistanis. She is the author of seven books on the history and etymological roots of both Spanish and Urdu languages besides having an enviable number of articles and research publications to her credit. Excerpts follow.

The News on Sunday: What brought you to Pakistan and how long have you been living here?

MM: I was working in the US when my father-in-law’s ailment brought us to Pakistan in 2004 because my husband wanted to spend time with him. I got married to a Pakistani in 1996, a year after I converted to Islam.

TNS: You have been living in Pakistan for many years now. How has been your interaction with Pakistani culture and society and what problems did you face, if any, during your period of adjustment here?

MM: My first problem was the language which I overcame with time. Initially, I was not sure if I was going to stay in Pakistan or move back to the US or Spain, so I was a little reluctant in learning Urdu. When it became clear that I will be living here permanently, I decided to learn the language. Although my Urdu is not absolutely perfect, I can communicate with people and express my desires and needs. The second biggest challenge was living in a joint family since this system is not in place in the US and Spain. However, this system can work if all parties are accommodative and have good intentions. This is a good setup, especially for the kids.

TNS: Apart from your passion for Urdu which reflects in your in-depth discourse and research, you have produced a couple of books on Spanish language. Can you give an overview of what aspects and dimensions of your mother tongue you have investigated?

MM: I have explored the grammar of poetry. People usually think that poetry does not have grammar and it is a whole bunch of words that rhyme and does not make sense but I think it does. I have also worked on the varieties of Spanish language.

TNS: With which language are you more comfortable, Spanish of English?

MM: I am easy with both languages. I have no problem with either of them.

TNS: Although Urdu has produced a rich literature through eminent poets and authors, it could not attract attention of linguists who could take up scientific study in the areas of morphology, syntactic structures and phonological characteristics of literary texts. What do you think is the role of Urdu literature in the evolution of Urdu language?

MM: I think it has an amazing role. You have people like Amir Khusru and many others who were producing literature in Urdu and most of them were Muslims. Some of them affected the language and some the language policy. They used to take the Sanskrit words out and make the language beautiful according to their individual styles. They have played a very important role in the evolution of language.

TNS: Have you acquainted yourself with literature written in Urdu?

MM: I familiarised myself not with Urdu literature but with Punjabi poetry. I wrote a paper on Sultan Bahu’s poetry but I approached it from linguistic point of view.

TNS: Did you also get interested in the spiritual dimensions of his poetry?

MM: I was trying to find out what was most important to him. Everything in his poetry revolved around one topic and that was the love for Allah.

TNS: Is the experience and logistics of writing a course book different from research-based monograph?

MM: Both experiences are very different. When you are writing a course book you have students and their comprehension of the material in mind. From the research point of view you are catering to a different audience. You have to use a different language and a system.

TNS: What do you enjoy the most, research or writing for students?

MM: Definitely the research. I am all the time after the challenge for discovery so that is what I enjoy the most.

TNS: You believe that language is a never ending resource of knowledge, education, and discovery and there is a need to promote the study of languages in Pakistan as a discipline. What steps do you think Pakistani universities, including PU, can take to accelerate this development?

MM: First of all they need to be able to understand the meaning and value of linguistics. Once they have understood that, they can set up linguistics departments in order to engage researchers in the research and teaching of the subject and produce more linguists. I have not done any research on how linguistics is perceived in Pakistan but my general observations are that people consider linguistics as the teaching of language which is not the case. For some reason they think that language cannot be a science. Their definitions are outrageous and they sadden me.

TNS: Quoting Tariq Rahman in your recent book, you have referred to the reforms in language that were carried out under the leadership of Mughal king Muhammad Shah and his minister Nawab Amir Khan, One of the reforms that gripped my attention and in a number of ways reflects our current social expressions, is about the change in the amorous conventions of Indian poetry and the way gender expressions were made more neutral. Do you think by neutralising the language standard cultural norms held against a certain gender can be changed?

MM: Language is something that can be used for many different purposes and to achieve different goals. It is a dangerous weapon. Euphemisms have been used by the US government, by all the presidents and politicians, in many different ways. Similarly, you have euphemism like ‘household assistants’ which we use for ‘maids’. In Spanish we have something called the general masculine. It comprises the female too and is used for linguistic economy. Three years ago the Spanish government passed a law according to which a distinction was made between feminine and masculine pronouns in order to give more visibility to female citizens.

However, the Royal Academy of Spanish Language did not accept this because the change had to be incorporated only in the official communication. People continued with the old traditions and gender issue in language was again sidelined. The issue hold true for many countries. For example, you have specific words to insult women. You talk with men but bring in mothers and sisters.

TNS: You steer clear of making any straightforward opinion about the status of Urdu and its significance in Pakistan, although you do touch upon all the prevalent perspectives and posit that an open mind is needed to deal with the ethnic and linguistic differences of the people of any land. What for you is an open mind and how far linguistic boundaries be stretched?

MM: We need to be tolerant about everybody’s language and ethnicity. About stretching the linguistic boundaries, the problem with Pakistan is that we have 72 languages. All these languages cannot be taught. Some of the languages are even struggling to survive. For example, the literacy rate of Seraiki people is one per cent. They are asking for a separate province. This is where the politics gets involved. Then you have national languages, English and Urdu, which all people may not be able to speak. So Pakistan has a very complex linguistic demography. The recent Supreme Court ruling has made the situation even more difficult. It is not about making Urdu the official language but it is about the consequences that Pakistani people may face. In Spain, we have Spanish as the official language and then come regional languages because the constitution clearly states that all the citizens need to be able to speak Spanish but the constitution of Pakistan does not say that. The linguists and politicians in Pakistan should sit together and decide how they are going to deal with two official languages, regional languages and national language. Medium of instruction is another issue that demands their attention.

TNS: The emphasis in your recent book is on the reforms that were carried out after independence; what do you think is the role of pre-partition Indian scholars such as Prof Naseeuddin Hashmi, Dr Mohiuddin Qadri Zor, Pandit Kaifi, Waheeduddin Saleem and the like who not only did the historical and descriptive analysis of Urdu but also traced its phonetic origins?

MM: I think they have a big role but they did not have all the means to carry out research. Lingusitics was not as advanced as it is now. For that time it was an invaluable contribution. Probably they contributed more than they had the recourse to.

TNS: There are two major figures whose research has been until now extensively cited in research on Urdu language -- Hafiz Mehmood Khan Shirani’s "Punjab mein Urdu" and Dr Shaukat Sabzwari’s "Dastan e Zuban e Urdu". Although you have mentioned Dr Sabzwari’s research in which he traces the historical roots of Urdu from Deccan, you did not bring up Shirani’s thesis which associates the development of Urdu with the Punjabi language? How would you create a balance between these two important historical narratives?

MM: I am not sure that Urdu has emerged from Punjabi. Since I do not endorse Shirani’s thesis, I have not cited him in my work.

TNS: Do you face any problem when you do not find translated works for your research?

MM: Accessing translations is not a problem but finding linguistic material such as etymological dictionaries is a hitch which slows down my research.

TNS: Are you planning to create a platform in future where you could bring together researchers in linguistics?

MM: I have thought about it but the majority of linguists in Pakistan are focused on the linguistics of English language. Moreover, even the people in the Linguistic Association of Pakistan are language teachers and not linguists. But I would keep researching the Pakistani languages. In fact my last two articles were about Seraiki language. I would also be looking forward to engage myself in collaborative research projects.

"Pakistan has a complex linguistic demography"