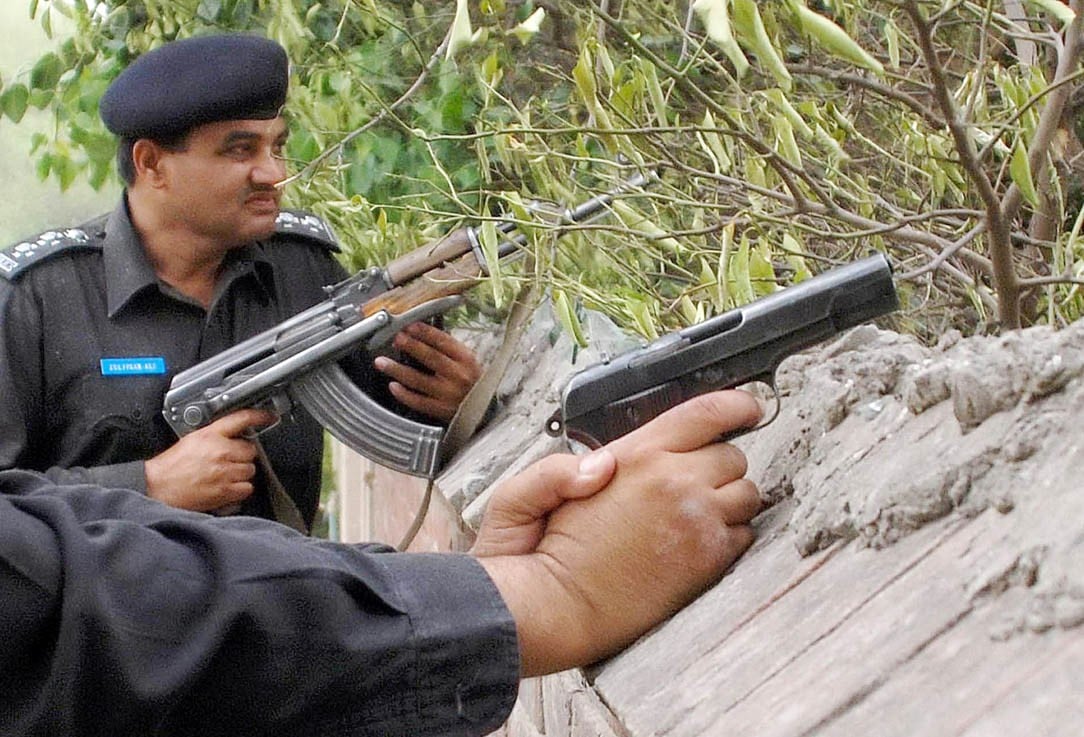 Instead of following the due course of law, many police officers are opting for fake encounters and extrajudicial killings as a shortcut to curb crime in Sindh. This has created a sense of insecurity among the people.

Young Raju Kolhi along with his friend Anees Talpur was badly injured in a police encounter in Naseem Nagar, Hyderabad. The First Information Report (FIR) in this case was registered on June 18, this year. A police team led by station house officer (SHO) Abdullah Bhutto of the police station Nasim Nagar stopped a vehicle for spot-checking near Shedi Goth, a suburb of Hyderabad city. During the checking, the police tried to stop two persons riding a motorbike. Instead of abiding by the police orders, the two men allegedly opened fire on the police and tried to flee. In retaliation, the police fired about 101 rounds of Kalashnikov and G-3 rifles, first injuring the suspects and then arresting them. The complainant of the FIR was SHO Bhutto himself.

In a press briefing on March 7, 2015, the police suggested the investigation be handed over to Sub-Inspector Abdul Hakeem Chachar of the same police station. Chachar solved the case in seven hours, declaring both Raju and Talpur as innocent passersby that got hurt mistakenly by the police.

Chachar recorded the statement of the two injured persons in hospital within seven hours, completed all other formalities and concluded the case.

The police did not produce the accused before any court of law to get their physical remand.

I tried to meet Raju Kolhi and Talpur to get their version, but they refused because the DSP of the Hyderabad police, known as ‘encounter specialist’, has threatened them against any media contact.

The law suggests that the matters of police encounters be referred to the Anti-Terrorism Court (ATC) but in this case the Hyderabad police tried to conclude the matter, and only SHO Bhutto was removed from office.

I tried to meet Raju Kolhi and Talpur to get their version, but they refused because the DSP of the Hyderabad police, who is known as ‘encounter specialist’, has threatened them against any media contact.

Sources in the Hyderabad police say that the matter was one in the series of fake encounters which started in December 2014 and are still going on.

According to the figures compiled by the Human Rights of Pakistan (HRCP), over 30 people have lost their lives and some 150 have been injured in fake encounters with the Hyderabad police, commonly referred to as ‘full fry’ and ‘half fry’.

Same sources in the Hyderabad police inform that in the months of April, May and June, all three orthopaedic wards of the Civil Hospitals in Hyderabad were filled with patients with bullet wounds. According to media reports, some 200 people have been killed in encounters in districts Mirpurkhas, Sukkur and some areas of Karachi.

Baseer Naveed, a representative of Asian Human Rights Commission, a Hong Kong-based rights organisation, told The News on Sunday that under Article 9 of the constitution of Pakistan, it is incumbent on the state to ensure the safety and security of people. The right to life as enumerated by the Supreme Court in Shehla Zia vs WAPDA case expanded the meaning of the right to life to mean a dignified life free from fear of being killed. However, at the same time, the law enforcement agencies (LEAs) have been given the power to shoot suspects on sight. The LEAs are, therefore, free to kill any person on the pretext of terrorism. And, the result of this freedom and impunity is a terrorised population.

"Between the extremists and the rampaging law enforcement officers lies a fast shrinking space for citizens. Those that cannot jump are being fried, in either frying pan or fire," concludes Naveed.

Senior journalist and analyst Murtaza Solangi told TNS that this is a matter of utter shame that the Sindh government is tolerating this mafia style anti-human tyrannical practice where law enforcers have become the biggest law-breakers in the land of Sufis.

Senior analyst Jami Chandio says the acts of Hyderabad police are against the law, constitution and human rights. "Police is not a law providing institution. Extrajudicial killings should be avoided and all the matters should be dealt with due process of law."

A majority of police officers who believe in fair play say that fake encounters and extrajudicial killings are the main source of income for the corrupt police officers in Sindh. They maintain that the purpose is never to keep law and order in the province but to terrorise the public. They further add that brutal low-ranking officials earn money by blackmailing criminals and in some cases innocent people.