Pakistan cricket is alive and kicking

The recently-concluded National T20 Cup in Rawalpindi saw the emergence of some fine young players on the horizon such as Imran Khan Jr, Rumman Raees, Hasan Ali, Amir Yameen who look exciting prospects for the future 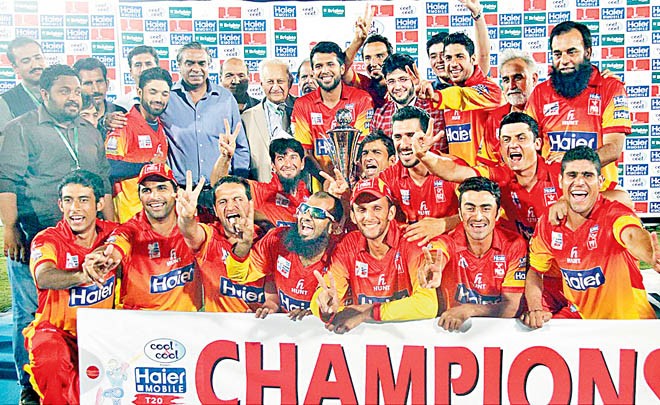 The stupendous success of Haier National T20 Cup gave a loud and clear message to the detractors of Pakistan cricket: there is abundance of talent in the country and our young guns are ready to conquer new frontiers in the world of cricket.

It was a delightful tournament by all counts, except perhaps fielding which leaves a lot to be desired and remains the Achilles heel of Pakistan cricket.

Apart from being very competitive, the tournament saw the emergence of some fine young players on the horizon such as Imran Khan Jr, Rumman Raees, Hasan Ali, Amir Yameen who look exciting prospects for the future. But the highlight of the event was clearly the fantastic show put in by Peshawar Region.

As former Pakistan spinning wizard Saqlain Mushtaq said the Peshawar side played to win from the very first day and their training and workout for the matches was as good as any international team.

Without any big superstars in their ranks, the title winners proved beyond any doubt that discipline and hard work always pay off no matter how stiff the odds.

With their unassuming but brilliant coach Abdul Rahman to guide them astutely at every juncture, the Peshawar lads invariably displayed cohesion and the right attitude to humble their rivals which was a treat to watch.

A well-oiled combination that boasts seniors like Raffatullah Mohmand, Imran Khan, Zohaib Khan and Israrullah and outstanding juniors such as Mohammad Rizwan, Imran Khan Jr and Iftikhar Ahmed is the reason for their success and I see quite a few of these boys making the national team in near future.

There were fine performance also from Sialkot, Karachi and Multan regions. They also boast a bevy of match-winners who enthralled the crowds in the tournament.

Sarfraz Ahmed, as usual, was in a belligerent mood during the tournament, both with bat and the gloves.

A player for all three formats, Sarfraz has truly been a most wonderful find for Pakistan cricket.

Fawad Alam and later Khurram Manzoor also impressed with some fine knocks. All-rounder Anwar Ali and Shahid Afridi, who joined the side late due to his stint in English cricket, remained a bit off colour which must have disappointed the fans.

For me, young Ruman Raees is a player to watch. He bowled with a lot of variation and pace and is a handy batsman too and has seeds to develop into a good all-rounder if his coaches guide him well.

In Mukhtar Ahmed and Nouman Anwar, Sialkot had two fine players in their line-up who almost took their side into the final.  Mukhtar, as we all know, can go berserk with the bat and has some breathtaking shots in his armour which earned him yet another brilliant hundred in the Haier Cup this time.

Bahawalpur’s Faisal Mubashir is another talented batsman who won back to back matches for his side and was Man of the Man in both fixtures.

He has an impressive range of shots at his disposal and a sound defense.

I must also congratulate Shakil Shaikh and his team for organising a smooth, exciting and incident-free tournament which is some accomplishment keeping in view the magnitude of the event.

The pitches were ideal T20 strips while the outfield was lightening fast which contributed to the tempo of the games and constantly drew the crowds.

It gives me a lot of satisfaction, indeed, to see that Pakistan’s domestic cricket is alive and kicking despite the fact that no international cricket has happened here, barring the Zimbabwe series, for over six years now.

With the security situation also getting better with each passing day, let’s hope that foreign teams start coming to Pakistan.

Pakistan cricket is alive and kicking