Now that the fees society has shaken the society out of its slumber, parents should realise that they have been lazy eyed all along while high-fees private schools thrived 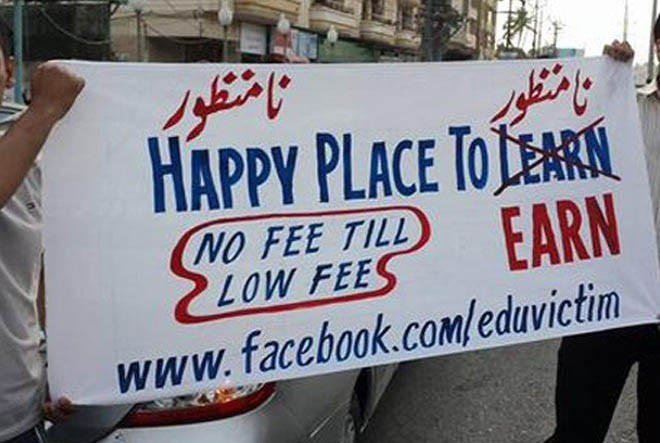 You must have heard of a condition called lazy eye. It occurs mainly in those children who use one of their eyes more than the other. As a result, the less used eye is atrophied. My friend’s son had a lazy eye. Neither he nor anyone else in the family discovered that he had one until he was ten years old. Why did my friend’s son not complain about any problems with his vision for so long? Well, because from his perspective he had a perfect vision. He had never experienced a better vision. So he discovered that he had a problem only when his condition got worse.

This anecdote came to my mind when thinking about the recent wave of agitation against the intolerable levels of private school fees.

It occurred to me that the agitating parents were similar in some ways to my friend’s lazy eyed son. They too had never experienced what functional public school systems are capable of achieving -- Pakistan never gave them one. They had also not experienced how a well-regulated private sector works in ways that protect the public interest.

The job of the state is to safeguard public interest under all conditions. When it comes to the private sector, the well-run states create fair and competitive conditions for the businesses to grow in ways that do not compromise public interest. But the citizens of Pakistan had, in general, not experienced the working of such a state.

Thus, the agitating parents, like everyone else in the society, must have acquired their sensitivities about education in a context already infested by an unregulated, unfettered, and highly segmented education marketplace. Here, I would like to caution the reader that I am not faulting the parents for their current stance on private school fees. I stand with them for an immediate reduction in the school fees. So please do not read this as a blanket critique of the parental activism against the private schools’ fees hike. I am just reflecting on a viable way out of this difficult situation by way of drawing your attention to the conditions within which parents’ sensibilities and choices are being framed.

Pakistan’s successive governments reinforced a classist organisation of schooling in Pakistan by making no genuine commitment to organise a high quality public school system. Rapid growth in the private education sector followed in the wake of a high demand for educational services. The private schools registered a whopping ten-fold growth in the 1980s and 90s. By 2008, approximately 30 per cent of all schools were in the private sector.

According to a recent study by the Campaign for Quality Education (CQE), the private schools grew by 60 per cent while the public schools only by 8 per cent. Most of today’s parents who are agitating in the streets went to the private schools during the last two decades of the 20th century. The government school system, in their perception, was meant more for the education of only those children whose parents could not afford to send them to a private school.

In addition to agitating on the streets, the educated and enterprising parents should also consider forming parent bodies to set up state-subsidised non-profit schools to supply free/low-cost education at the point of service.

Such situation could only come about in a society that had discarded the notion of education as a public good. It is easy to see that private schools’ feasibility depended on a decline in the numbers and quality of the public schools. As an example of this, consider the pre-feasibility report for setting up a for-profit secondary school, prepared by Small and Medium Enterprise Development Authority (SMEDA). It spelled out the ‘opportunities and threats’ to the private high school. Interestingly, the perceived threat to the feasibility of the private school was stated as "Revival of public/government schools in the future through effective government policies and regulations."

With no such threat to the private schools’ feasibility in sight, they proliferated. Meanwhile, the private school market segregated itself in response to different income levels of their potential clientele. There then emerged a shopping mall model of schooling in Pakistan. A shopping mall offers its clientele an abundance of variety and price range to choose from for particular goods. Likewise, the consumers of education had available a wide range of schools with different price-quality menus.

In this shopping mall of private schools, the parents from low-income bracket bought education from ‘low fees’, the middle income sent their children to ‘middle fees’, and the high-income clientele had the high-fees schools to cater to their educational needs. There were variations in price-quality menu within each one of these brackets. However, all parents, except the poorest of the poor, could find a private school where they could enrol their children.

The fact that such market segmentation could have high social costs and has not been the preferred model of schooling in most functional societies was lost on most people and seldom, if ever, debated in Pakistan. Notwithstanding these concerns, this shopping mall model became the dominant mechanism of delivery of educational services in Pakistan.

In an earlier article, I had argued that growth in the number of private schools in our society was not a sign of its health, but a symptom of a life-threatening societal disease. I made this suggestion on the basis of following observations. First, the economic growth in general in Pakistan was declining. Second, the levels of poverty, intolerance, extremism, etc. were concomitantly increasing. Pakistan seemed to be falling off a precipice, except that this was not true of its private education sector, which was on a high growth trajectory. But what were these schools contributing to, if, despite a growth in their numbers, the society kept rushing headlong into an abyss at an alarming pace?

In my view, they were exacerbating the existing inequalities in the Pakistani society. But for those who were growing up with the shopping mall model of private education with no other options, this was a perfectly normal state of affairs.

What appeared normal to us left a profound impact on some external observers as a highly abnormal educational situation. Doctor Diane Ravitch, a prominent historian of education from the United States, visited Pakistan around 2005 to do a study of Pakistan’s education system. Back at home, Dr Ravitch was known to be critical of the progressive educators and somewhat sympathetic to champions of the free market and advocates of privatisation of education. However her visit, according to her, showed what excessive private schooling could do to the society and caused her to make a U-turn on nearly all of her stances at home.

Pakistan’s "weak and inequitable education system, dominated by private and religious institutions, convinced her that protecting the United States’ public schools was important to democracy."

Such excessive privatisation appeared perfectly normal for us. The parents agitating on the streets today were born in and grew up in an environment in which the private school was all there is in their educational universe. These private schools thrived in a climate with no independent source of information about the quality of education imparted in these schools. Lacking such information, the parents made the choice to send their children to one or the other school based mostly on hearsay. As one of my parent friends put it, "I decided to send my daughter to this school because everyone I know said it was a good school."

Everyone knew that these private schools were for-profit businesses. Private schools were never meant to be ‘sadqa-e-jaria’ (perpetual charity). On the contrary, they did everything they could to increase their profits. Economists tell us that the competition between the for-profit businesses in a free market ultimately adjusts the price-quality menu in favour of consumers. But the free education marketplace of Pakistan did not apparently behave according to this dictum. Instead of being driven down, the prices kept on increasing until they finally crossed a threshold sending parents out on the streets.

What can the state do? While it may force the private schools to take back the fees increase, this will most likely not eliminate the future problems the parents might face. The state’s job is not to directly fix the prices charged by a firm for its goods and services. But the state can, and should, prevent the anti-competitive practices. It can also act as an independent information provider to the parents. But ultimately it must focus on improving the public schools so that most of the parents, especially those in the lower and middle-income bracket, can make a real and not a forced choice.

What can the parents do? I would suggest that in addition to agitating on the streets, the educated and enterprising parents, as many as possible, should also consider forming parent bodies to set up state-subsidised non-profit charter schools to supply free/low-cost education at the point of service. Liberate your children from these high-fees private schools for all times to come!