Of strength, valour and zeal 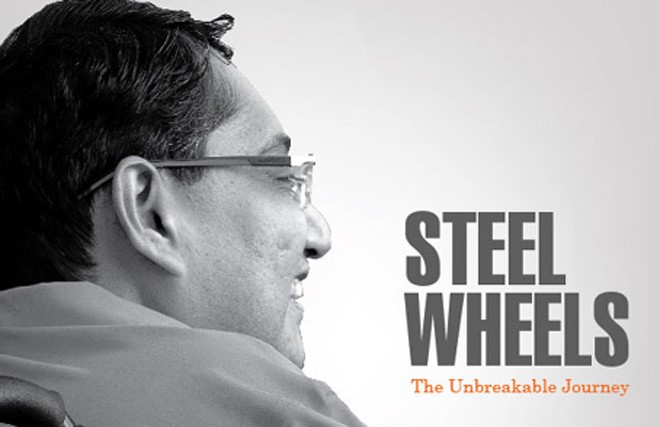 "No matter what your circumstances may be, your perspective determines how you deal with a situation and whether or not you emerge victorious."

"I realized that despite the fact that I was physically disabled, my spirit was still alive and burning with enthusiasm and zeal for life. As long as this fire is still burning, there is nothing you cannot do, if you put your mind to it."

"Don’t let your disability get the better of you. Grab life with as much strength and energy as you can muster and make of it whatever you can."

These three excerpts which I’ve quoted are from this sensitively written book Steel Wheels - The unbreakable Journey. This is a narrative of Asad Rafi who recollects memories from his childhood to present-day life. Asad Rafi, now 46, suffers from Friedrich’s Ataxia since the age of 17 and has to use a wheel-chair. Prior to the onset of his ailment, he was a cricket player and a bright student. But he had to quit his passion for the game and his desire for higher studies.

The beauty of Asad’s writing is that the reader, instead of pitying his disability, feels proud of this brave man and appreciates his present capabilities. For instance, he has now emerged as a renowned inspirational speaker. He is a member of the International Toastmasters’ Club. He also served as the President of the Pakistan chapter of this Club. Asad is a highly committed person who has transformed his disability into a tool to achieve competence and success.

"I realized that despite the fact that I was physically disabled, my spirit was still alive and burning with enthusiasm and zeal for life. As long as this fire is still burning, there is nothing you cannot do, if you put your mind to it."

I closely know of yet another identical case that is full of strength, valour and zeal. This is the example of Syed Ali Abbas, my grandson. Ali was a brilliant O’ level student, a tennis and cricket player and a member of the school’s riding club. He was very fond of driving (though it was illegal at his age!). By and by, he became a competent driver he was an active, healthy and a social young man.

One morning when he woke up, in March 2011, he found that his entire body was paralysed. He was rushed to CMH, Rawalpindi and was placed in the ICU. He remained in the hospital for about two months. Luckily the upper portion of his body was restored to a normal state. But from the chest down, he remains paralysed. The doctors diagnosed his ailment as Transverse Myelitis which is, alas, incurable. 2015 is now the fifth year of him becoming wheel-chair-bound.

In the beginning, for some time, he was very upset. Occasionally he used to become very distressed at his condition. But by and by, he came to terms with his situation. He has now diverted his attention toward his laptop, cell phone and TV.

I agree with Asad Rafi that Pakistan is not at all a wheelchair-friendly country. We have experienced many situations where, just because of his need to use a wheel-chair Ali was deprived of his basic rights. Ali’s mother (my daughter) visited many universities of our choice to seek Ali’s admission. But none of them had the facility for students on wheel-chairs. Similarly, except for just one or two places, there is no facility for the wheel-chair-bound customer in shopping areas, restaurants and in public transport in the twin cities of Rawalpindi and Islamabad.

When Ali attained the age of 18, he was very eager to obtain his Computerised National ID Card. We searched from pillar to post for any wheel-chair-friendly NADRA outlet for his registration. But we could not find a single one.

Finally, in a comparatively better office, his chair was carried in by his attendant and the driver, to gain access to the biometric system. His passport application is also pending because of a similar situation. Ali could not cast his first-ever vote in the 2013 elections, which he was very keen to do, only because the polling station for our area had lot of stairs and it was not possible to carry his chair inside the polling station and up the flight of stairs. I really do not know if there is any law which allows invalids to cast their votes through postal ballot. If there is such a provision, it should be widely publicised.

I hope that some civil society organisations or the corporate sector -- realising its social responsibility -- step forward and undertake the vital task of providing ramps at different places for citizens on wheel-chairs while keeping in view the valuable suggestions provided by Asad Rafi in his book in the chapter ‘A wheel-chair-friendly Pakistan’.

This book is strongly recommended reading for all.

Of strength, valour and zeal