Khusro Mumtaz
In the picture
September 13, 2015 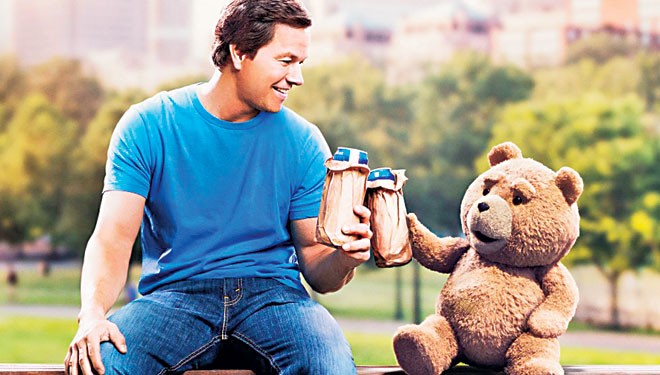 Once the first Ted became the most successful "R" rated comedy ever at the box-office a sequel was inevitable. So Ted, the foul-mouthed, pot-smoking sentient stuffed bear (voiced by writer/director Seth MacFarlane) is back with his "thunder buddy" John (Mark Wahlberg) and, surprisingly, they haven’t lost their mojo. The script may have needed a bit of tightening up but the sequel is as crudely, rudely funny as the first - maybe even funnier - skewering pop culture left, right and centre and taking no prisoners. Plus the movie gets to make a point about what it is to be human as well as the lot of minorities in most societies.

The two leads are given good support by Jessica Barth as Ted’s significant other and Amanda Seyfried is a more than welcome addition to the cast as lawyer Sam(antha) L. Jackson (Sam L. Jackson - get it?) as she gamely allows her own physical attributes to become the butt of a running joke (it’s one of the funniest things in the movie). Liam Neeson also shows up early in the film in an absolutely absurd yet hilarious cameo. Why the sequel hasn’t been as commercially successful as the first is beyond me.

Cut to chase: Just as funny as the first Ted – if not funnier

The fourth Terminator movie – Terminator Salvation - was a dreary affair which almost killed the franchise. But the fifth comes with creator (and director of the first two entries in the series) James Cameron’s personal endorsement and Arnold Schwarzenegger’s return, front and centre, to the role that really put him on the Hollywood map (his cameo in Salvation really didn’t count) as the merciless, unstoppable cyborg sent back in time to kill humanity’s last hope. After all, Schwarzenegger did promise that he would be back, didn’t he? So I was, at least, intrigued if nothing else (being a jaded reviewer teaches you to hold your expectations in check).

The good news is that Genisys is better than Salvation. The bad news is it is better – but not by much. A reasonably entertaining first half which treads the same path as the very first Terminator but with just enough differences to keep you intrigued quickly devolves into a complete mess (the almost incomprehensible script is full of plot holes) that upends (for no good reason) the whole basis of the series. The idea is to set up the franchise for a whole new set of adventures where the future is unknown but the movie’s undermining of its own legacy is both harmful and depressing. Plus neither Jai Courtney nor Emilia Clarke can hold a candle to Michael Biehn or (particularly) Linda Hamilton, the original Kyle Reese and Sarah Connor. Schwarzenegger has fun as the aging cyborg but even he can’t save this attempt at reenergising a fading franchise.

Cut to chase: Fails to revive the franchise

A couple of years ago Sandra Bullock and Melissa McCarthy delivered a hit with their reasonably funny comedy, The Heat, about two mismatched law enforcement officers teaming up to solve a case. And if one female-centric BOAC (bickering-opposites-action-comedy) can work then so can another one, right? So now we get Reese Witherspoon playing a tightly wound-up cop assigned to protect the brassy Sofia Vergara, a state witness against a drug cartel leader.

Witherspoon and Vergara are both talented and proven comediennes. Remember Witherspoon in Legally Blonde and Election?And Vergara is a riot in TV’s Modern Family. But even they need good material to work with. Hot Pursuit is not particularly funny relying mostly on unsuccessful pratfalling and asking Vergara to play to type (hot Latino who mangles the English language). There is also a running joke about Witherspoon’s height and Vergara’s age which is mildly amusing at first but gets tiresome quickly. The plot also does a few, not very convincing, somersaults to fill out its 90 minutes run time. The appealing leading ladies deserved a lot better.

Cut to chase: No need to pursue this one