Unveiling the hidden US agenda to promote war industry, grab oil and gas resources, use religion to threaten governments and impose economic policies 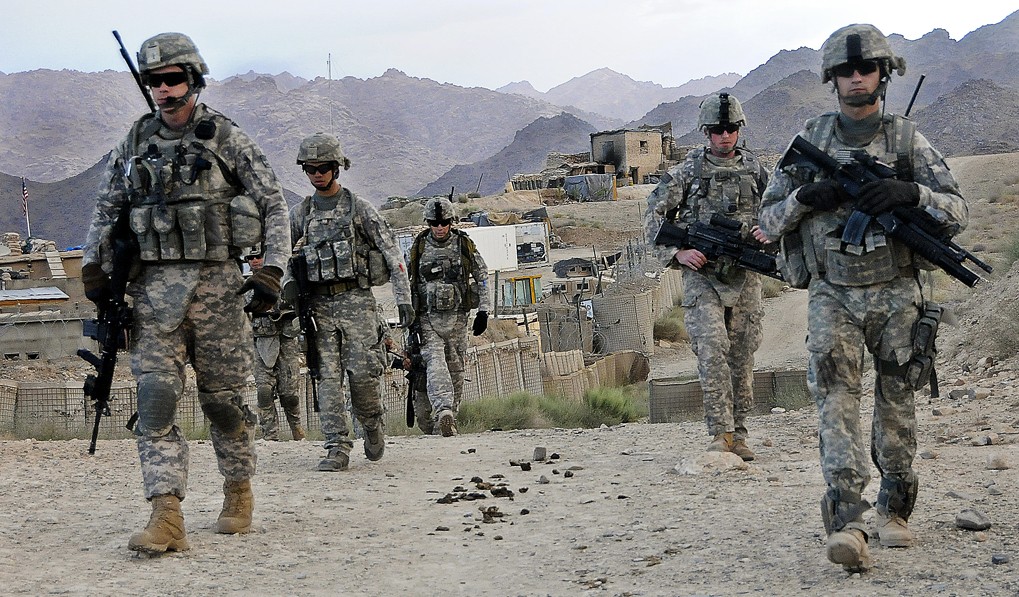 On September 9, 2001, a gruesome and heinous crime against humanity was committed in New York -- wanton attack on twin towers of World Trade Centre symbolising financial might of United States of America. Without admitting and investigating massive security lapses, President George Bush immediately decided to attack and occupy Afghanistan. It was alleged that the Taliban regime was adamant to protect the leader of al Qaeda, Osama bin Laden -- once a staunch supporter of Western-sponsored holy war against Soviet infidels.

Since 2001, America and its allies are at war with "terrorists" and world is in a perpetual state of turmoil. The vested interests -- terrorists, warlords, drug barons, oil and war industry tycoons -- are minting money, and the citizens of the world are terrified.

Reliable evidence is available confirming that the proponents of ‘Free World and Democracy’ clandestinely support terrorist organisations through ‘hidden hands’ (agencies) to keep armed conflicts alive -- promoting the interests of war industry. The real beneficiary of ‘war on terror’ is military-industrial complex. The rulers in America and West are captives in the hands of tycoons of war and oil industries. Arms manufacturers earn billions by selling weapons to all -- governments, militants and drug barons.

It is a matter of record that much before 9/11, America and its NATO allies decided to invade Afghanistan. The decision was taken in Berlin during the joint meeting of Council of Ministers in November 2000. 9/11 was just an excuse for invading Afghanistan. The real cause was apprehensions regarding Turkmenistan Gas Pipeline Project in which powerful corporate entities had financial interests. It was not the existence of al Qaeda in Afghanistan that led to invasion of Afghanistan but corporate interests of American and its allies.

George W. Bush appointed former aide to the American oil company UNOCAL, Afghan-born Zalmay Khalilzad, as special envoy to Afghanistan nine days after the US-backed interim government of Hamid Karzai took office in Kabul. This appointment underscored the real economic and financial interests at stake in the US military intervention in Central Asia.

Khalilzad was intimately involved in the long-running US efforts to obtain direct access to the oil and gas resources of the region, largely unexploited but believed to be the second largest in the world after the Persian Gulf. As an advisor for UNOCAL, Khalilzad drew up a risk analysis of a proposed gas pipeline from the former Soviet Republic of Turkmenistan across Afghanistan and Pakistan to the Indian Ocean. He participated in talks between the Oil Company and Taliban officials in 1997, which were aimed at implementing a 1995 agreement to build the pipeline across western Afghanistan.

UNOCAL was the leading company in the formation of the Centgas consortium, whose purpose was to bring to market natural gas from the Dauletabad Field in southeastern Turkmenistan, one of the world’s largest energy reserves. Khalilzad also lobbied publicly for a more sympathetic US government policy towards the Taliban. In an op-ed article in the Washington Post, he defended the Taliban regime against accusations that it was a sponsor of terrorism, writing, "The Taliban does not practice the anti-US style of fundamentalism practiced by Iran." He said, "We should… be willing to offer recognition and humanitarian assistance and to promote international economic reconstruction. It is time for the United States to re-engage the Afghan regime."

The "re-engagement", suggested by Khalilzad, would of course have been enormously profitable to UNOCAL, which was otherwise unable to bring gas and oil to market from landlocked Turkmenistan. Khalilzad as a close confidant of Bush at National Security Council was to report to Condoleezza Rice, then National Security Advisor [later became Secretary of State] who also served as an oil company consultant on Central Asia.

After serving in the first Bush administration from 1989 to 1992, Rice was placed on the board of directors of Chevron Corporation and served as its principal expert on Kazakhstan, where Chevron held the largest concession of any of the international oil companies. The oil industry connections of Bush and Cheney were playing the dominant role in US Afghan policy but entire Western media was portraying it as a war against "terrorists".

There were just a few dissident voices like that of Frank Viviano who observed in San Francisco Chronicle of September 26, 2001: "The hidden stakes in the war against terrorism can be summed up in a single word: oil. The map of terrorist sanctuaries and targets in the Middle East and Central Asia is also, to an extraordinary degree, a map of the world’s principal energy sources in the 21st century…. It is inevitable that the war against terrorism will be seen by many as a war on behalf of America’s Chevron, Exxon, and Arco; France’s Total FinaElf; British Petroleum; Royal Dutch Shell and other multinational giants, which have hundreds of billions of dollars of investment in the region."

The reality stated by Viviano in 2001 was well understood in official Washington, but the most influential corporate-controlled media outlets -- the television networks and major national daily newspapers -- maintained silence that was politically motivated self-censorship. The sole exception was an article that appeared on December 15, 2001 in the New York Times business section, headlined, "As the War Shifts Alliances, Oil Deals Follow."

The subsequent invasion of Iraq using the bogey of weapons of mass destruction and appointment of Zalmay Khalilzad as US Ambassador there proved beyond any doubt that the reality of ‘war on terror’ was nothing but quest for OIL. Donald L. Barlett and James B. Steele [TIME, May 19, 2003] remarkably exposed the dark side of American oil policy from classified government documents and oil industry memos, involving a pair of Iraq’s neighbours, Iran and Afghanistan.

Barrack Obama faithfully followed the policy of his predecessor. On assuming power, he promised more military operations in war-ravaged country to please the war industry tycoons. No US president was ever interested in countering terrorism. The US and its allies just launched "oil and war bonanzas" around Iraq, Afghanistan and Pakistan with multiple objectives: ensuring continuous enormous profits for war industry; control over oil and gas rich countries and containment of China by physical military presence in its nearby areas.

Dr Paul Craig Roberts, former Assistant Secretary of Treasury for Economic Policy, in his article, ‘On 9/11 Doubts Were Immediate’, observed: "The more the story of 9/11 was presented in the media, the more wondrous it became. It is not credible that not only the CIA and FBI failed to detect the plot, but also all 16 US intelligence agencies, including the National Security Agency, which spies on everyone on the planet, and the Defense Intelligence Agency, Israel’s Mossad, and the intelligence agencies of Washington’s NATO allies."

This is the ugly reality of ‘war on terror’. United States and its allies have never been interested in uprooting terrorism. The CIA in fact has been supporting warlords and militants for its nefarious designs. Clinton, Bush, Obama et al have been levelling allegations against Iran and Pakistan of supporting militants, whereas CIA covertly keeps on aiding these elements. It unveils the hidden agenda of US to promote war industry, grab oil and gas resources, use religion to threaten governments and impose economic policies benefiting multinational corporations that finance and control the Western ruling elites.