The real dilemma is that ruling elites are unwilling to pay taxes on their unprecedented and exorbitant benefits, shifting burden of taxes on the weaker sections of society 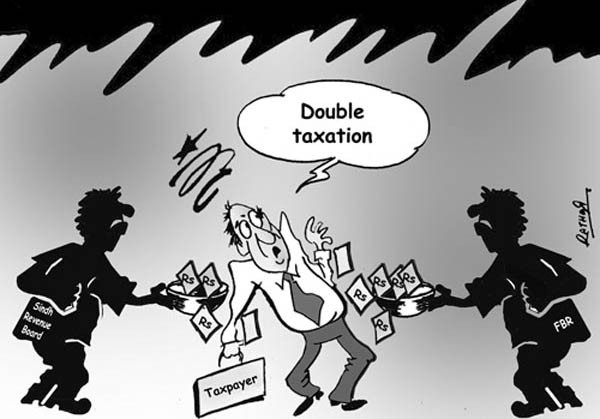 The ruling elites of Pakistan -- militro-judicial-civil complex, businessmen-turned-politicians and absentee land owners -- are responsible for pushing the country into a terrible mess. The country is trapped in a deadly debt quagmire -- our rulers beg for bailouts and ironically talk about self-reliance!

They make tall claims about reforming the tax system but shamelessly use the Federal Board of Revenue (FBR) as a tool to get unprecedented tax breaks or ensure its ineffectiveness to amass enormous untaxed assets. Adding insult to the injury, they enjoy life of luxury at taxpayers’ expense. Due to meagre or non-taxation of luxury and commercial properties e.g. clubs and golf courses, unprecedented exemptions given to generals, judges and high-ranking civil officials, the national kitty suffers huge losses. If these losses are recouped, our tax-to-GDP ratio can rise to 15 per cent.

The narrative that Pakistanis do not pay taxes, popular with analysts, TV anchors, academicians, policymakers and foreign donors, is a hoax. The reality is that the poor are the victim of oppressive taxes, whereas the ruling elites are thriving on labour of the down-trodden.

There is a need to expose the role of these predatory elites in our socio-politico-economic decay. Unfortunately, the media, being one of the beneficiaries of the exploitative system, cunningly divert the attention of the masses towards trivial issues through popular but hollow talk shows. Our ruling elites have only one agenda: self-aggrandisement. The concentration of power and wealth in their hands, coupled with lust for control, has given rise to perpetual institutional confrontations, terrorism, social unrest and economic disparities -- putting to risk the very survival of the state.

There is no taxation of unprecedented perquisites and perks enjoyed by ruling elites. The most heinous crime is grabbing of state property by them under the pretext of rewards and awards (free or at throwaway prices). These "gifts" and other tax-free benefits have a huge cost to national exchequer, which remains to be quantified. The taxes ruthlessly collected from the masses are brazenly spent on their luxuries -- palatial bungalows, fleets of cars, army of servants, foreign tours and what not. The only solution, as suggested by the ex-Chairman of Planning Commission, Nadeem Ul Haque, is to monetise all their benefits and perquisites.

The corrupt and inefficient government servants faithfully serve the political elite and in the process also make a "fortune" -- all at the expense of the general public. Take the example of FBR where billions are lost annually due to incompetence and corruption. Since the rich and mighty do not pay due taxes, regressive taxes are imposed hurting the poor and middle class. Even then the FBR miserably fails to meet the revenue targets.

For the fiscal year 2014-15, shortfall recorded (officially) was Rs222 billion. On the one hand, Pakistan is a country with one of the low tax-to-GDP ratio, and on the other bulk of collection is wasted mercilessly for non-productive expenses. At provincial level, there is no will to collect agricultural income tax from the rich absentee landlords -- share of this tax is less than 1 per cent of GDP!

People ask when will the time come to take all tax cheat to task? They wonder why the FBR is sparing tax-delinquent elected members, unscrupulous traders and mighty military and civil officers.

Tragically, the citizens whose income falls below taxable limits under the income tax law are criminally taxed through withholding tax regime. Funds, extorted from their hard earned money, are plundered and wasted by the ruling elites. The militro-judicial-civil complex, prime minister, president, governors, chief ministers, ministers, state ministers, advisers, MNAs and MPAs together squandered Rs800 billion in the fiscal year 2014-15 on perks, perquisites etc. Not only this, these predatory elites did not pay tax on free or concessionary benefits and/or plots allotted in utter violation of section 13(11) of the Income Tax Ordinance, 2001 ["the Ordinance"], which says:

Section 14(b) of the Ordinance defines "services" to include the provision of any facility" and the concept of "fair market" is defined in section 68 as under:

(2) The fair market value of any property or rent, asset, service, benefit or perquisite shall be determined without regard to any restriction on transfer or to the fact that it is not otherwise convertible to cash.

(3) Where the price referred to in sub-section (1) is not ordinarily ascertainable, such price may be determined by the Commissioner".

Section 39(1)(j) of the Ordinance is also attracted which declares the following as income chargeable to tax:

"The fair market value of any benefit, whether convertible to money or not, received in connection with the provision, use or exploitation of property".

It is sad to note that militro-judicial-civil complex blatantly violates tax provisions and does not pay tax due on getting state land, free accommodations and other benefits -- all covered in section 13(11) and 39(1)(j) of the Income Tax Ordinance, 2001. The FBR is not at all interested to tax them -- their top notches are also beneficiaries of these benefits and they also serve the masters loyally.

Ruling elites are unwilling to pay taxes on their unprecedented and exorbitant perquisites and benefits, shifting burden of taxes on the weaker sections of society. This is the real dilemma of Pakistan. During the last regime of the PPP, an ex-member of the FBR wrote a letter to then finance minister, Abdul Hafeez Shaikh, that massive tax evasion/loss of revenue had occurred due to non-taxation of government property given to the high-ranking officials at concessional rates. He took no action and the same is the position of Senator Ishaq Dar -- he has so far not given any thought to this letter, which is lying unattended for many years now.

Tariq Bajwa, Chairman FBR, is also silent on this issue. His track record shows that he is least interested to nab the rich and mighty. As secretary finance of Punjab, he did not demonstrate the will to collect agricultural income tax from the rich absentee landlords or mighty urban property holders. During his tenure as Chairman FBR, the same apathy prevails. He admits there are about 3.8 million tax ultra rich living lavishly but not paying income tax. However, not a single prosecution is made under the law till today.

People ask when will the time come to take all tax cheat to task? They wonder why the FBR is sparing tax-delinquent elected members, unscrupulous traders, mighty military and civil officers getting state lands without paying any tax. Recouping of lost revenue of billions of rupees from them will certainly convey a loud message to all that the FBR means business and nobody is above law.

As the mighty sections of society are not paying taxes due from them, the common people rightly argue against discharging their tax obligations, especially when the state has failed to protect their lives and properties, what to talk of providing basic facilities of education, health, housing and transportation.