The recent floods have threatened wildlife in katcha areas of Sindh 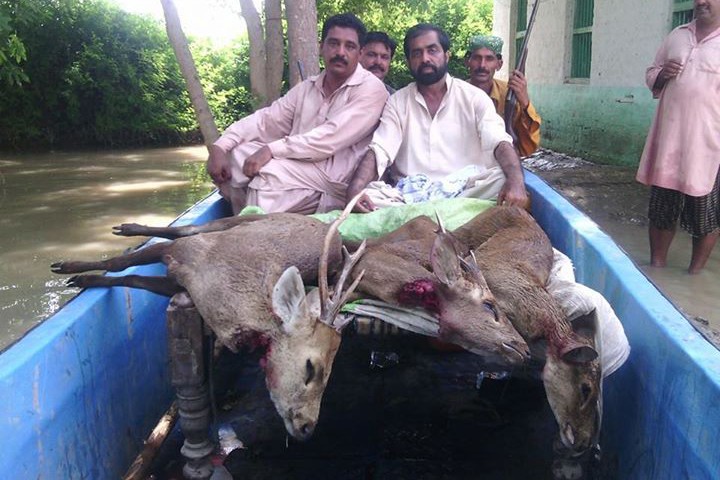 At an abandoned bus stop near a small village of Pyaro Goth in Dadu district, a man packs meat in shopping bags to distribute among a large number of people gathered around him. He is not a butcher, instead he is a farmer, and rather than selling vegetables or fruits, he is surprisingly selling meat. And no ordinary meat but that of an endangered hog deer that he killed the night before near his village.

"It’s not only me; a lot of people are finding hog deer and other wild animals these days in this area," he says, without disclosing his name.

The recent floods have forced wild animals to rush outside their natural habitats and on to the katcha (riverbed between both protective embankments) land. The floods in katcha land has not only destroyed human settlements, washed away standing crops and forced people to migrate, but it has also destroyed the natural habitat of several endangered wildlife species.

"The floods have not only displaced animals but also birds. Many people have begun to hunt them and sell them in the local markets of Dadu district near River Indus," says Manthaar Mallah, a resident of goth Pat Sharif, near goth Pyaro.

"River Indus katcha land is an important habitat for the wildlife animals. A variety of wild animals have ecosystems which are essential for the balance of biodiversity," says Nadeem Mirbahar, an environmentalist working with the International Union for Conservation of Nature (IUCN). He adds wild animals disperse seed of wild plants; they eat other animals to balance the biodiversity and also eat dead leaves of bushes, and help them grow new ones.

The riverine forest in the katcha land of River Indus was once full of wild animals, but their natural habitat is shrinking since the influential landlords have occupied the katcha land and cut down forests to make land for agriculture purpose.

The riverine forest in the katcha land of River Indus was once full of wild animals, reptiles and low flying birds, but their natural habitat is already shrinking since the influential landlords have occupied the katcha land and cut down forests to make land for agriculture purpose. Therefore, these wild animals have started moving from place to place in search of natural hiding places.

The rising river has flooded habitats and has forced animals to move into adjacent residential and commercial areas, where they come in contact with the residents that are eager to take advantage of the situation and start hunting to make petty money.

According to local residents, unchecked hunting of endangered wild animals is rampant not just in Dadu but areas along River Indus, including Shaheed Benazirabad (former Nawabshah), Ghotki, Naushahro Feroze, Sukkur, Jamshoro and Hyderabad.

According to confirmed reports, at least four hog deer have been hunted in villages near Sunn and Sehwan.

"Yes, people are killings wild animals displaced by floods," admits Saeed Baloch, provincial conservator, Sindh Wildlife Department. He says after getting reports of hunting of endangered animals his department has increased patrolling of wildlife inspectors and other staff on the protective embankments in order to keep an eye on hunting of wild animals.

"We have lodged three FORs (First Offense Report) against local influential of katcha land districts Dadu and Jamshoro, as they have killed two endangered hog deer and porcupine. We have also recovered a live hog deer, which will be returned to its natural habitat," Baloch adds.

He says his department has deployed wildlife inspectors and other staff on the embanks for round the clock patrolling so that people may not kill wild animals. Also, "if they find any animal, they will catch it and keep it in safe captivity till floodwater recedes," he says.

Increasing population, urbanisation and deforestation in Sindh has destroyed the natural habitat of wildlife in different regions across the province, which was once famous for the presence of reptiles, mammals, birds and amphibians. In different parts of Sindh influential feudal lords are not only hunting these animals but also inviting their friends from within the country and abroad to come for hunting of endangered animals.

Experts believe that Pakistan is one of the countries worst hit by climate change. Within Pakistan, Sindh is the greatest sufferer, hit by calamities such as the recent heatwave in Karachi that killed more than 1,300 people, continuous drought in Thar desert and floods in other geological regions. This situation has caused acute food shortage for human and animals.

"We have to restore natural habitats for wildlife and plant forests in different region, and create awareness among people about the importance of environment otherwise we will lose all these beautiful animals permanently," says Mirbahar. 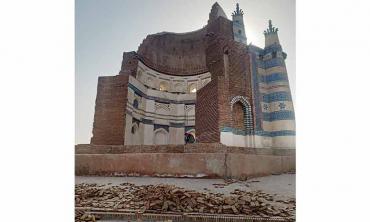 A majesty that is no more