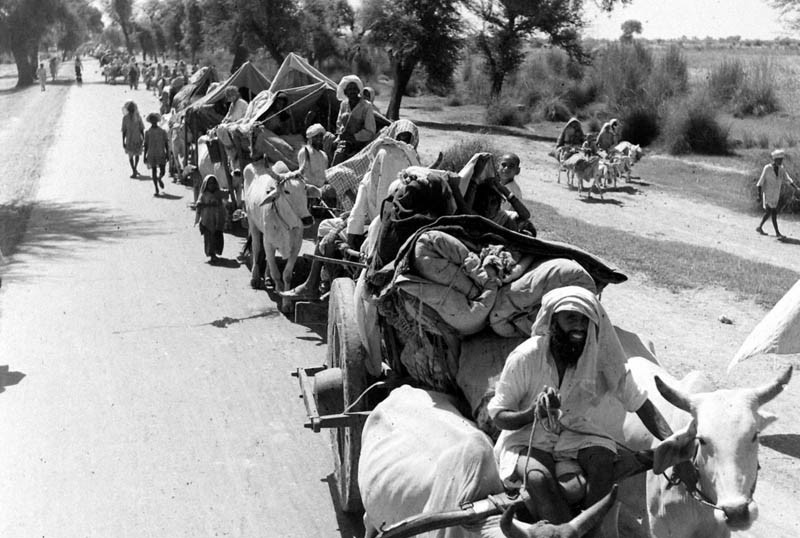 On August 16, 2015, famous anchor of Express TV, Ahmed Qureshi ran a small segment in his show on the revival of Khalistan Movement. In order to create sympathy in Pakistan for the Sikh cause, Ahmed Qureshi showed a clip in his show. This short video had been produced by a Sikh group called Dal Khalsa International which upholds the banner of Khalistan.

Introducing the video, Qureshi made the most shocking claim. He said that a research undertaken by an American professor has proved that the violence which took place at the time of partition in 1947 and led to the brutal killing of millions of Sikhs and Muslims was actually carried out by Hindus. More specifically, this was carried out by Hindus who were members of RSS and other extremist outfits. A few incidents of violence by Sikhs must have taken place (ikka dukka howay hon gay), he says, but the bulk of killings, loot, plunder and rape were carried out by Hindus.

Calling the video a historical document, Qureshi says it proves that Hindus carried out the genocide of both Sikhs and Muslims in 1947. He then plays the video. I will come to the ‘methodology’ of this massacre in a short while, but the video does not make the claim that it is based on the ‘research findings’ of an American professor. It only uses the American professor to cite the figure of 0.2 million Sikhs and 0.4 million Muslims who died as a result of this communal pogrom.

This American professor, claimed as a source in this video, is none other than the legendary Professor Paul Brass who has worked on various themes relating to Indian politics for almost 50 years. I am a huge admirer of Professor Brass’s work and have read most of it. I cannot claim to have read all of it yet. But I am certain that there is absolutely no way he could have, in any way whatsoever, held the Hindus responsible for the death of both Sikhs and Muslims in partition riots. The figures of Sikhs and Muslims who died may well have been given by him. Far from disputing these numbers, I believe this is the minimum death toll of the massacre of 1947.

Now how did the Hindus kill Muslims and Sikhs in Punjab at the time of partition? According to Ahmed Qureshi and Dal Khalsa, Hindus disguising as Sikhs killed Muslims, looted their properties and raped their women. The Hindus also disguised themselves as Muslims to do the same against Sikhs.

Before turning to documented, historical evidence, let us evaluate these claims on the basis of simple logic. While there is a remote possibility that Hindus disguised themselves as Sikhs to carry out atrocities against Muslims in East Punjab (as it had become part of India), how could they have used the same technique to carry out violence against Sikhs in West Punjab (which had become part of Pakistan) where they themselves were under brutal attack? Like Sikhs, Hindus in West Punjab were also being targeted, uprooted from their ancestral homeland and forced to migrate.

It, therefore, makes no sense that Hindus could have been responsible -- whether overtly or covertly -- for the violence suffered by Sikhs in Pakistan. It was done exclusively by Muslims. Also, while some pockets of Sikh population have survived in Pakistani Punjab, there is no concentration of Hindu population left. This is despite the fact that the Hindu population in West Punjab was far greater than that of Sikhs.

Partition violence has been extensively studied by scholars of India and Pakistan. Most recently, Ishtiaq Ahmed’s voluminous work The Punjab Bloodied, Partitioned and Cleansed has documented the incidence and scope of violence which took place around 1947. His study covers the entire region of British Punjab and his sources are drawn from British archives as well as wide-ranging interviews of more than 100 survivors of partition.

Similarly, Ilyas Chattha’s work breaks new ground on the theme of partition violence. He even found the FIRs which were registered for acts of violence committed at the time. These reports record the number of attackers, their qaum and the casualties resulting from their acts. Ahmed, Chattha or any serious (or even the most amateur) scholar of partition studies has not found any evidence to suggest that Hindus carried out violence in India as well as Pakistan.

But since Professor Brass’s name has been used in the documentary and indirectly referred to by Qureshi, I would like to cite from his article published in 2003 on the theme of genocide in Punjab. This article, titled "The Partition of India and Retributive Genocide in the Punjab, 1946-47: Means, Methods, and Purposes", is available online for free download. Before commenting on the role played by the three major communities in acts of violence, Brass starts off by holding the British authorities, top leadership of Congress and Muslim League responsible for creating an atmosphere of communal discord. He holds them responsible "for deliberate or misplaced actions that contributed to the major occasions of violence that did occur before and after partition."

Such actions and policies, he says, had helped to polarise the electorate in 1946 which led to "communal identities and the consequent consolidation of the votes of Hindus and Muslims behind opposing political parties." One can say that this practice is still followed today -- especially by the BJP. It made use of this tactic to make a political rise during late 1980s on the issue of Babri mosque. More recently, in the last general elections in India, it caused communalised voting behaviour in the UP by instigating Muzaffarnagar riots.

Brass is extremely critical of Jinnah’s call for direct action. He says: "The Great Calcutta Killing of August 1946 was an immediate consequence of Jinnah’s call for "direct action" for the achievement of Pakistan, which he certainly knew meant violence here and elsewhere in the country." Violence was not just a consequence of partition, says Brass, but also a principal mechanism for creating the conditions for partition.

On the specific issue of violence in Punjab, Brass puts the blame mainly on Muslims and Sikhs. But an organised incidence of violence with a certain purpose was mostly carried out by Sikhs against the Muslims. This was because Sikhs were not in majority in any part of Punjab. The whole scale expulsion of Muslims from East Punjab could have made it possible to settle Sikhs from West Punjab in the areas vacated by the Muslims. Brass recalls the interview of Master Tara Singh which he conducted back in 1967. He told Brass in most brazen terms: "We took the decision to turn the Muslims out."

In doing so, the Sikhs were being helped by various princely states of Punjab, especially Patiala, Faridkot and Nabha. Brass admits that "although not all the violence that occurred in the East Punjab can be attributed to the Sikhs, there is no doubt that a very large part of it was the result of deliberate actions on the part of Sikh gangs, instigated by their leaders, supported by some of the Sikh princely states and Sikh military, ex-military, and civilian officers, many of whom provided arms to the raiders."

It can not be said that Sikhs were the only organised group. The RSS -- Hindu extremist organisation which serves as an ideological anchor for BJP -- reportedly had more than 58,000 members. The National Guards formed by the Muslim League had 39,000 members. Sikh Akali Fauj [Force/Army] stood at 8,000 members. In addition, there were several Sikh jathas in the countryside.

So while Hindu armed groups did exist in East Punjab, the bulk of killing was carried out by Sikhs by their own admission as they had a specific agenda, i.e. cleansing East Punjab of Muslims to make room for the settlement of Sikh migrants to create a concentration of Sikh population in contiguous areas. Whereas such an agenda did not exist for Muslim groups, the motivation for violence was triggered by such concerns as revenge, religious passion and, most importantly, to take over lucrative landholdings and other immoveable properties of affluent Hindus and Sikhs.

These are only some of the historically documented facts available about the violence which took place in 1947, the people involved in it and the motivations behind it. What happened in 1947 has often been described in such terms as genocide and barbarity.

The fictional narratives of partition violence -- penned by the likes of Manto, Bedi, Amarta Pritam and Krishan Chander -- look at it more in terms of loss of sanity and humanness. None of these or other top fiction writers wrote about partition violence in glorifying terms -- of sacrifices made by the people for the independence of India and creation of Pakistan. Instead, they have written about the memories of a shared past, loss of meaning caused by displacement of neighbourhoods and eerie silence at the betrayal of friends. It is through such poignant stories that these writers have tried to reclaim sanity.

I am not sure if the retrieval has been done or if it is even possible in the first place. This is because it requires, as a prerequisite, taking responsibility for the actions committed in the past.

Organisations like Khalsa Dal and individuals like Ahmed Qureshi, through such wildly inaccurate claims, are not trying to bridge gaps or heal the wounds of suffering. They are only interested in fuelling another conflict, another source of violence which can serve the petty interests of one state against the other. They are seeking perpetuation of politics of hatred than anything else.

Rather than playing the victim card and shifting the blame on someone else, the communities of Punjab -- Muslims, Hindus, Sikhs and even Christians -- who suffered from the trauma of partition and its violence need to come forward and apologise for their actions if they want to have at least some kind of closure.