The children of the Christian couple who was burnt alive in Kot Radha Kishan last November find some normalcy, for now 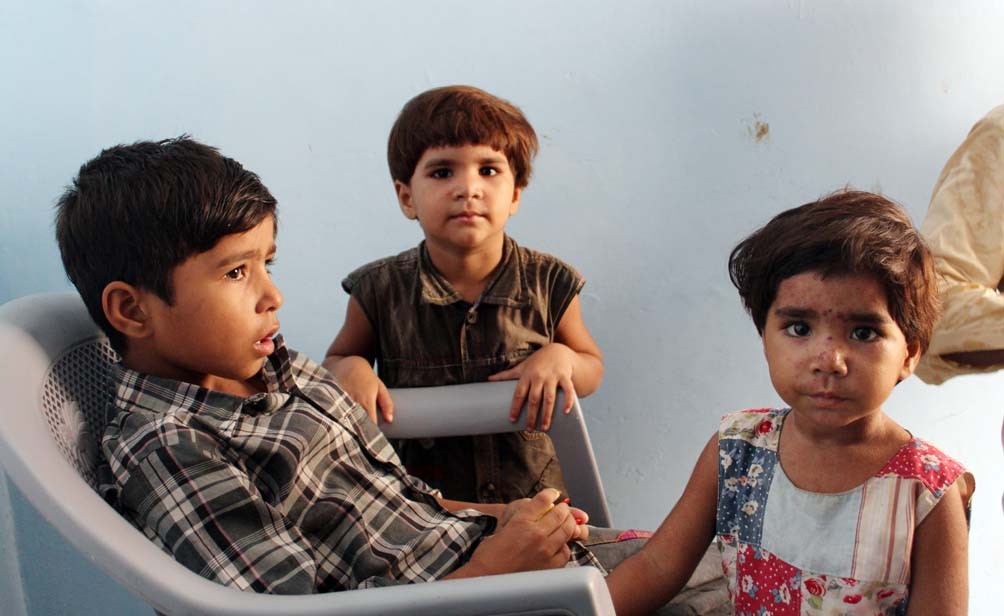 The car turns off from the main road and follows a small winding lane. The alley opens up to the railway track and continues parallel to the track. We stop the car there and get off. Saleem Iqbal, who works at the local Issac tv channel and is the spokesperson of the family, is my guide. He points across the track; that’s their house.

Shama and Shahzad, a Christian couple who worked at a brick kiln in Kot Radha Kishan, were accused of blasphemy in November, 2014. Two days later on November 6, an angry mob dragged the couple out on the street, tortured them and burned them alive in a brick kiln. The couple had four children -- two sons and two daughters. They had given their second son, Zeeshan, to Shahzad’s brother Nawaz when the boy was an infant. The house that Saleem is pointing towards is where the other three children live with their maternal grandfather Mukhtar Masih.

We cross the track, careful to stay clear of scores of garbage-filled shopping bags. Saleem knocks on the gate of a house and it opens revealing tight stairs spiralling to the second flood. Shama’s father, Mukhtar Masih greets us at the top of the stairs. He points us to one of the two rooms on that floor. I go inside while Mukhtar stands at the door with Saleem. They exchange quick words.

I realise Mukhtar doesn’t want to talk. "Why didn’t you tell me this last night when we spoke," Saleem asks exasperated. Mukhtar waves a hand. "You don’t pick up the phone," he replies. I call out to ask if there’s a problem and Mukhtar waves a hand again. He is angry, he says in quick, disjointed sentences, because people come to his house, take pictures, and make promises. They get money from abroad, but the family doesn’t see a penny.

I finally convince him to sit down and talk a little. His mood, however, remains volatile. He is tired of being used, he continues. The government has come through on its promise. It has given rupees five million for the children which are in a bank and 10 acres of land. The family gets Rs20,000 monthly profit on the amount, out of which, Rs5,000 goes to Zeeshan, the child adopted by Shahzad’s brother.

The children come into the room shyly. They are a curious lot. Suleiman, age seven, is the eldest followed by Sonia, five, and Poonam, now almost three. The elder two speak in Punjabi but Sonia is the more gregarious of the two. As I talk to them about their school and other activities, I feel a poke on my foot. Poonam, standing quietly next to my knees is pulling at my shoes strap. The little one is still, unsmiling, and extremely inquisitive. She opens the diary in my lap and takes out the pen tucked in the pages. When I smile down at her, she opens the diary again in one swift move, puts the pen back and pats it.

I ask Mukhtar about his daughter Shama. He blinks, sighs and looks away. It is still a painful topic for him and he doesn’t like talking about her. Shahzad had five brothers, Saleem tells me, all of whom worked in bonded labour at the same brick kiln. Shama’s eldest sister Yasmin is married to Shahzad’s brother Fiaz.

Yasmin is the one who rescued the children and took them to safety when the mob killed their parents. Later, over the phone, she tells me the children witnessed their parents being beaten and burned. "Poonum was in Shama’s arms when the mob dragged her away," she says. "I was standing there crying as the men killed them, when I heard men say that they should grab the kids and burn them too. I realised we were all going to die so I grabbed them, and my six children, and got out of there as quickly as I could."

Mukhtar is angry at all of Shahzad’s brothers except Fiaz. "I blame them," he says. "When Shama and Shahzad were accused of blasphemy, we told the couple to get out of there. The brick kiln owner Yusuf Gujjar, told his munshi [accountant] to not let them go till he returned as they owed him Rs150,000. Fiaz told his brothers, that he would take the debt on himself and the couple should be sent to Lahore. But they didn’t agree. The next morning Shama and Shahzad were killed."

The brothers, Mukhtar says, have made a deal with Gujjar. "They’ve taken money from him and have given written statements that he isn’t to blame." But, he says, he won’t forgive him. Though the brothers have made a deal, Saleem later tells me, Gujjar is still in custody along with over 100 others because in this case the police, and not the family, is the complainant. "That is to ensure that the aggrieved parties don’t get pressurised to strike a deal with the accused," Saleem says.

Suleiman, the eldest, was six years old at the time of his parents’ death. But he had already been working with them at the brick kiln. He had "become yoked under the existing bonded labour contract of his father," says Wilson Chowdhry, chairperson of UK-based non-profit British Pakistani Christians Association. The association is one of the few charities helping the family; its lead officer in Pakistan, Mehwesh Bhatti, provides emotional and financial support to the children. "[Suleiman] would no doubt have been toiling for the rest of his life had it not been for the tragic death of his parents," Chowdhry continues.

It’s the cruel truth. Today both Suleiman and Sonia are in school. The youngest Poonam, who is almost 3, will be joining her siblings this year. Their education’s expense is being borne by Cecil & Iris Chaudhry Foundation, run by the air force hero Cecil Chaudhry’s daughter Michelle Chaudhry. "The foundation takes care of their school fees, books, uniforms, and transportation, and any other expenses reqired," says Chaudhry in an email. "It is my conviction that education is one of the best defences against exploitation," she adds.

Though in school and seem to be settling down -- Suleiman got 80 per cent marks in his final exams and Sonia 65 per cent -- the kids’ future is still uncertain. Currently a custody battle is ongoing between Shama’s brother Yasin, Shahzad’s brother, advocate Sardar Mushtaq Gill, Legal Evangelical Association Development (LEAD) and Mukhtar. The Child Protection and Welfare Bureau had also filed a petition for the temporary custody of the children till their guardian is decided. But so far, the children have remained with Mukhtar.

As we get up to leave, I feel a tug on my shirt. I look down to see Sonia holding a glass of cold water in her tiny hands. Being a polite hostess, she raises it over her head offering it to me. When we get on the landing, she calls out, "bring amrood [guava] with you next time." Saleem answers that he will. I remain quiet.

The article was published under the title Cruel truths in The News on Sunday on August 23, 2015.