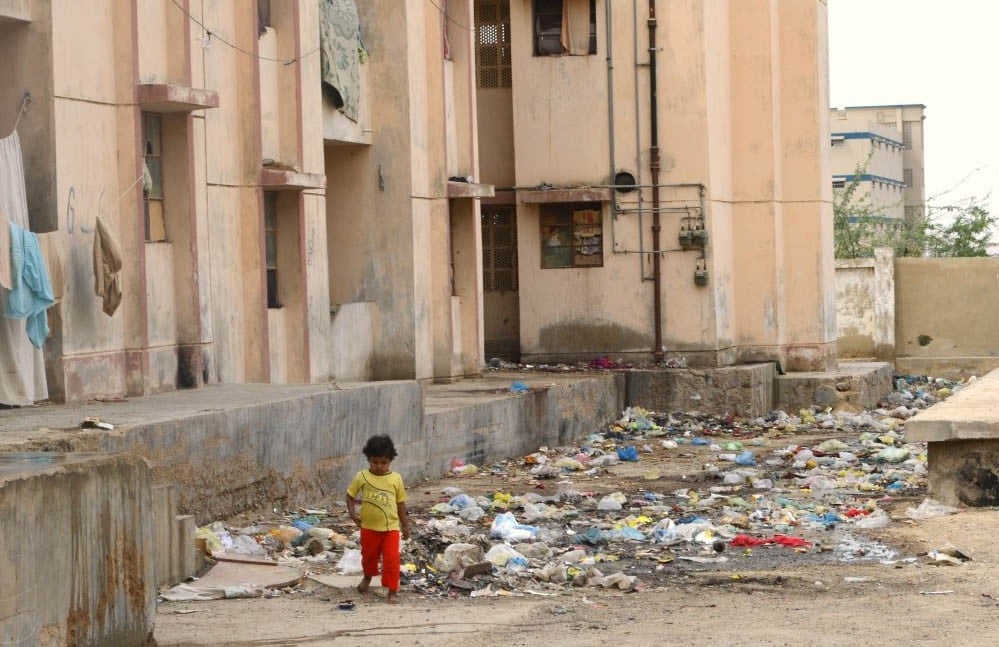 Muhammad Ramzan runs a small grocery shop inside Labour Square in the outskirts of Karachi near the Super Highway. A professional farmer and native resident of Jacobabad, a district in northern Sindh, Ramzan left his village in August 2010, when his village and surrounding areas were submerged with flood water, now known as Pakistan Super Flood 2010.

Like other flood victims, Ramzan reached Karachi and spent three nights under the sky. Later, they found Labour Square, a huge residential complex with 1000 flats built by the Sindh government for industrial labourers that were not handed over to them. "We fear the government will evacuate us from this place by force. We are ready to buy this house if the government sells it at a reasonable price on installments," Ramzan tells TNS.

The residential complex was lying vacant for many years due to government negligence when it was occupied by agricultural labourers.

The provincial government declared their occupation illegal instead of arranging for their resettlement in the native districts. It shut down all municipal services, drinking water, natural gas connections, so that they vacated the place.

Many people are rushing to Karachi: the affectees of 2010, 2011, 2012 and 2015 floods, people from the drought-hit areas in Sindh, people from southern Punjab whose agriculture has suffered as a result of climate change, and people from northern areas facing terrorism.

Different studies reveal that Karachi’s population grew by 80 per cent between 2000 and 2010, which is the largest such increase of any city in the world. Not Karachi alone, but almost every mega city of Pakistan is witnessing mass migration from rural areas.

People are also migrating to big cities because of a reduction in income and lack of basic facilities and infrastructure, which they mostly find in urban centres. According to official data, about one third of Pakistan’s total 180 million population is living in cities today and, in the next one decade, it is expected that about 50 per cent of country’s total population will be living in cities.

If the government is serious about residential schemes for low-income groups it has to allot land to the poor people on small installments and make it conditional that they have to live in the houses.

Those who are already living in scattered settlements have no other option but to accommodate their extended family in the same space. That means as family grew they built the second storey. As these low-income people are poor, they get help from those who are known as land grabbers. So, as the demand increased, land grabbers started occupying government land and selling that to the low-income groups in Karachi.

According to Sindh Katchi Abadi Authority, there are more than 600 slums, which are basically built on government land.

In Karachi, with more than 4000 industries at different locations, the city needed a large number of labour that was not available in the city. Most of the labourers either came from Punjab or Northern Areas and KP. The provincial government has not built any residential scheme for them.

In the absence of residential colonies, labourers started residing in slums and, thus, the demand for illegal slums increased.

"The allocation of land by government authorities is a complicated process and it needs huge money and lengthy documentation about which these low-income people are either not aware or lack interest. Therefore, all the schemes announced by the government for low-income people is bought by middle class people," says Tasneem Ahmed Siddiqui, an expert on housing.

"Almost all the mega projects related to the real estate are either for the middle class or upper class, like Bahria Town, DHA City, and even those initiated by the government, which the low-income people can’t even imagine of buying," he says.

In 1997, the Nawaz Sharif government announced Prime Minister’s low-income housing scheme to build 1 million small flats in 30 cities but that was not completed. At some locations where these flats were constructed, the prices were so high that low-income people couldn’t even imagine buying that.

Later, Pervez Musharraf’s government announced four different low-income housing schemes but they, too, were not executed and the same happened with chief minister Punjab Shahbaz Sharif’s announcement after 2008 elections.

In 2008, the Sindh Chief Minister Qaim Ali Shah announced that his government will build 100,000 homes with an allocation of Rs2 billion in the budget. But that remained an announcement.

Talking about the solutions, Siddiqui says if the government is serious about residential schemes for low-income groups it has to allot land to the poor people on small installments and make it conditional that they have to live in the houses.

"It is important to accommodate low-income groups, which are 60 per cent of the population. Their family size is bigger than the remaining 40 per cent population. By allotting land to the poor, the government can stop fake price hike of the land," he adds.