Let there be no mistake, golf cannot then be solely the domain of the ‘privileged’. Even when it is in Pakistan, it is the only sport that supports the livelihood of at least several thousands of poor people who work to maintain the golf courses 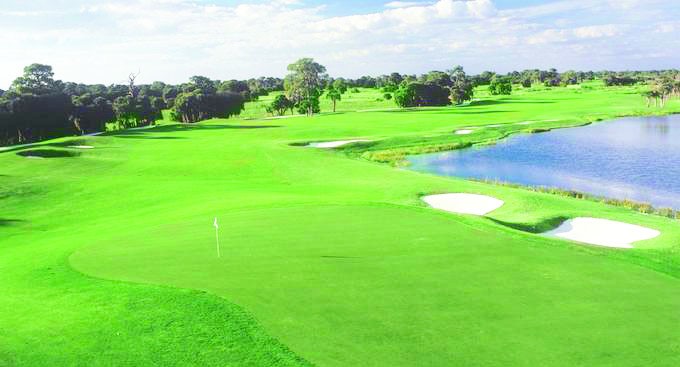 "I only play golf on days ending with Y"! That’s how avid golfers would like life to treat them. Well, golf in Karachi has a busy month ahead - first on the calendar was the CNS Golf Championship at the Karachi Golf Club, sponsored by one of his kind patron Sohail Shams of UMA, followed by the Sindh Open at its ‘home’  -- the Arabian Sea Country Club. The third week brings the DHA Independence Day Cup - all Open Championships totalling a prize basket of nearly Rs10 million. It is therefore expected that every eligible professional will be playing golf in Karachi and practically hoping to give their best.

So it turns out that Karachi is the happening place for golf - with professionals, senior professionals and leading amateurs everywhere to be seen. Off late, the senior professional scene is also getting bigger in size correspondingly with increased prize money. While a great deal of effort goes into organising such mega golfing events, the onus of which lies presently with the respective clubs who rely entirely on supportive sponsorships.

The Sindh Golf Association is the only provincial body of golf that manages to organise three major events, on its own steam, generated entirely through the monthly contribution of all its members, by way of capitation fee and a tournament levy. That being so, there is now a genuine desire to formally institutionalise the Association, moving away from its honourary role, to a full-fledged secretariat with a committed staff duly paid. Such an establishment would be pro-active, responsive to development and performance based. The SGA is also launching its quarterly newsletter -- ‘The ClubHouse’ -- with the commencement of the Sindh Open on Independence day.

On the professional side, golf is indeed growing but not anywhere in quality, near our neighbours as well as Bangladesh and also Sri Lanka. While we have the talent in Shabbir Iqbal, Muhammad Munir, Matloob Ahmad, Waheed Baloch and the new stars emerging particularly Hamza Amin, a former national champion turned professional, the prodigious son of the legendary amateur golfer Taimur Hassan. The Jehangir brothers -- Aadil and Danyal -- are the first few amateurs from amongst the members, who turned professionals - the number is still very small - as most of our professionals come directly from the caddy class. Quite a number of our caddy boys have also been given the ’playing right’ as amateurs, with the hope that they will move onto professional status after gaining the necessary experience and exposure. Many of these boys have excelled as amateurs representing Pakistan abroad. This has been the practice in India, Bangladesh and Sri Lanka as well. India is somewhat far ahead on this as the level of basic education, academic as well as practical is relatively higher there than in our Country. We therefore, very clearly need to focus on such issues that hinder our progress, even as a nation. Both commitment and a responsibility are key to betterment.

Golf is exclusively a club sport in Pakistan. Clubs are getting increasingly expensive and exclusive to enter. How then are we expected to search for ‘talent’ and ‘promise’ as obviously our choice is limited to what our clubs allow to nurture?

The Pakistan Golf Federation and the provincial associations do not own a single golf course meaning there is not a single ‘Public Golf Course’ which could allow simply anyone to learn and play golf. The good news is that Islamabad is soon going to have the first public golf course under the PGF. That will surely open golf to the public in Islamabad. Should not the capital of every province also hope to get a public golf course? Such a course requires approximately 120 to 150 acres of land in or around the city, which would also serve as the "lungs of the city".

Let there be no mistake, golf cannot then be solely the domain of the ‘privileged’. Even when it is in Pakistan, it is the only sport that supports the livelihood of at least several thousands of poor people who work to maintain the golf courses and the hundreds of caddies employed, professionals engaged and a large retinue of staff. The myth that it is a rich man’s game is not valid anymore. The golfing gear and equipment is readily available at every golf club and many ProShops that have come about. One such prominent Proshop ‘Masters golf’ is run by Mohammad Ali Hai, Karachi’s most successful golfer and a former national champion of Pakistan and Bangladesh. Everything of golf is now quite affordable and also through the generosity of our fellow golfers, is made available to those less privileged.

Being a club sport, golfers who are members by virtue of their inheritance are of course the lucky ones. Those not so lucky now sweat over the fact that years ago membership was offered to them or available to them at what can out rightly be termed as a ‘ridiculously’ low amount of Rs700 and compare it now to Rs1.2 million and rising. So will golf again become unaffordable? Yes and No. Many new golfers rather pay a ‘green fee’ and become part of the golf scene. There are fortunately still many golf clubs in smaller cities or in the outskirts which are still very inexpensive and by virtue of their affiliation to the PGF, entitles it members to the use of any of the big golf clubs in Pakistan, where most golf is played.

Presently in Karachi, we have three prominent golf courses, the KGC at Karsaz, the Defence Authority Country and Golf Club at DHA and the Arabian Sea Country Club in the Steel Mill area. Recently commissioned is the Airmen Golf Club at Korangi Creek, which has the potential of being a top level championship course. Others such as ‘Western Winds, Dreamworld resort and Hyderabad are still struggling with the distance factor and dearth of memberships.

Golf is nonetheless ‘on course’ in Pakistan and the focus this whole month is on Karachi with the 20th edition of the CNS Open, the 17th edition of Sindh Open and the 8th Independence Day Cup in the city.

The author is a prominent member of Pakistan’s golf fraternity having represented the country at the international level. He is a renowned architect and served Nespak as its Managing Director. Currently, he is President of the Sindh Golf Association.