"I cannot socialize with an agenda to get more work" 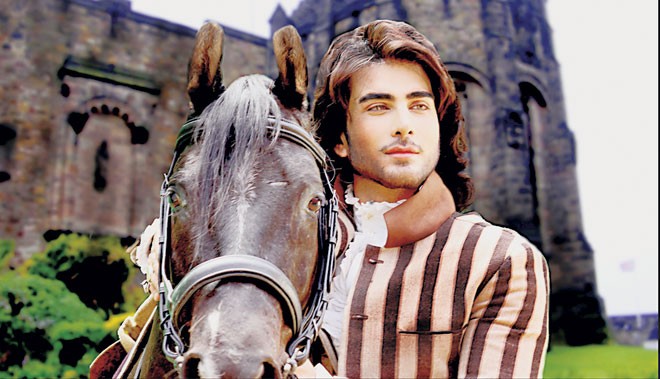 He is charming, he is articulate, and if looks could kill, his fans would have formed an army of zombies by now. But Imran Abbas knows how to keep it cool and dispassionate even when surrounded by glitz and glamour, carrying his feelings safely guarded from the outside world. Instep recently got the actor to open up about his upcoming period romance Jaanisaar, directed by the legendary filmmaker Muzaffar  Ali, why he opted to make his Bollywood debut with the questionable Creature 3D and his fondness for all things artistic and literary.

We know that you have always been an avid follower of art and literature. Was that one of the reasons you chose to do Jaanisaar?

Absolutely. I am very artistic and I appreciate all forms of art, whether it is poetry, painting or architecture. Jaanisaar is a period film. It is visually stunning and has a beautiful blend of literature, history and Urdu poetry. The backdrop is the mid 1800s and the film has been shot mostly in Lucknow. I myself am an architect, having graduated from the NCA, Lahore, so art and history have always fascinated me. Infact, it has significantly influenced my personality as I have always been surrounded by artists, classical music and books.

How was the experience of working with Muzaffar Ali and how did this project help you grow as an artist?

For me, Jaanisaar was not only a growing process professionally but it also helped me evolve personally. I feel richer in my thoughts. My knowledge base has increased significantly. Muzaffar sahab is a library in himself and we have so many interests in common. His knowledge of literature, especially Urdu, and his research on history will blow your mind away. I had a great time with him off the sets, given our shared fondness of poetry. And one more thing - after Jaanisaar, I have become an excellent horse rider.

You have been part of period dramas before, including Umrao Jaan Ada, which was one of the biggest television projects of its time. Is it really fun to relive the past, especially when the present and future are so different?

Maybe there is something nawabi about me that I keep  getting such roles! But honestly, as I said, art attracts me and this film has a great historical and artistic aura. You know, when you are part of a regular film that is set in current times, it’s easier for you to relate to it. You don’t need to alter your mindset and tune it back to hundreds ofyears ago. In many ways, I was living a dual life because once you are away from the set, you are inhabiting a tech-savvy world which is very different from the era and the life captured in the film. My previous experience of period dramas actually made the task easier for me.

All our male exports to India coincidently are good singers too - Ali Zafar, Fawad Khan, Atif Aslam and yourself. Do people in Bollywood know about this hidden talent of yours?

Not all people know that I am a trained classical singer. I have not sung in this film but I am definitely singing for my next, which is going on the floors soon. Talking about songs, the Jaanisaar soundtrack has some extremely melodious numbers by the likes of Shreya Ghoshal, Ustad Shafqat Ali Khan and the legendary Abida Parveen.

You had to let go of some really good scripts that were offered to you, including Aashiqui 2 and Ram Leela; what do you look for when you approve a script?

Sanjay LeelaBhansali had expressed his wish of working with me when he was starting Ram Leela but Aashiqui 2 was actually offered to me which I couldn’t accept as I was contract-bound to some other project. I really wanted to do that one because I felt I fit into the character really well. He was a singer, a lover and that anger and frustration had a great performance margin. If a role holds an element of excitement and challenges me inner artist, then I go ahead and say yes. That’s the reason I signed Creature 3D- it was a unique concept, the first 3D thriller. Big names like Vikram Bhatt, Bipasha Basu and T-Series were involved. So it excited me and I did it. The fact that it didn’t do too well at the box office is a different story altogether.

Given that you area very private person, is there a conscious effort on your part to fit into the Bollywood circuit? How do you manage to stay visible in an industry that is populated by so many stars?

You are right that one has to do a lot of networking and PR in Bollywood to stay afloat. I admit I am quite bad in this area and I don’t socialize much. That’s just how I am as a person; I never did it in Pakistan as well. To be honest, I am extremely satisfied with the work that is coming my way without really doing the PR stints. I enjoy my own company. I am happy reading a book or writing when I am not working. I am content as an artist and derive peace and happiness from my work. I cannot socialize with an agenda to get more work. That’s not me!

You have been one of the spokespersons for Zee Zindagi that brought the best of Pakistani television to India. What do you think is the reason for the success of our dramas across the border?

I was actually the brand ambassador of Zee Zindagi in India and I launched it across the country. The response has been great so far and I feel proud of the feedback that I receive as a Pakistani here in India. They relate to our characters and stories more than they do totheir own dramas. Pakistan’s top-rated serials are being shown and people are in love with the content. It’s not only the general public; many people from the industry feel inspired by the stories we are showing. It has opened a new market for our artists and there is a proper two-way exchange happening now.

So when do we get to see you on television again?

TV has become an equally important medium and stars internationally and in India are proudly associating themselves with it nowadays. I have been in India since last year because of my films but I will now try to balance my TV appearance as well. There are a few projects that I am considering. I definitely don’t want to disconnect myself from television.

An Indian daily quoted you as saying that that you are not a practicing Muslim but are into spiritualism. Is it true?

Not at all! I think they misquoted me. I have always been practicing my religion and the rituals. In fact, it is this practice which keeps me in control and I feel very content and positive. Spiritualism, on the other hand, is very personal and you cannot tag it with any particular religion. I feel there is one power who is up there supporting us, watching us and it is our duty to stay connected with this supreme authority either through spirituality, meditation or whichever way one is able to connect.

What has been the most memorable experience in your life/career so far?

Meeting MuzaffarAli sahab and discussing almost everything under the sun with him. I had watched Umrao Jan so many times because of its creative value and I wanted to meet this man once. I could have never imagined what luck had in store for me. I have immense respect for him and his expertise.

"I cannot socialize with an agenda to get more work"