Azhar Ali’s batting form is pleasing but he needs to develop attacking instincts as a captain. He has to get that feel of when to put on the pressure especially when the game isn’t going his way 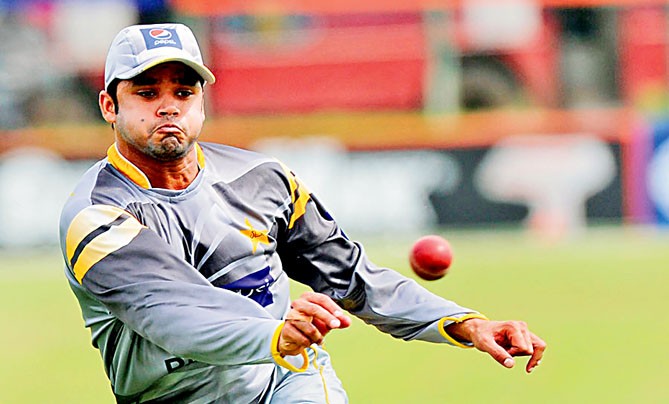 So Pakistan have crossed the first hurdle in their bid to earn a direct spot for the Champions Trophy by winning the ODI series against Sri Lanka. They have exchanged places with West Indies and have jumped to 8th spot above them who are now below the threshold and placed 9th They would have been fully assured had Zimbabwe not scheduled a tri series at home involving them and West Indies.

However, now they have a problem with the tri-series coming up. Pakistan had perhaps agreed to it before the Sri Lankan ODI series hoping that they would have a backup if they lost the series against Sri Lanka and remained below West Indies. But now they have fallen into their own trap it seems. I suppose Pakistan had also agreed to this as a condition for Zimbabwe touring our country.

But for now Pakistan must enjoy the series win. They have played magnificently though Sri Lanka have appeared to look a bit below par, especially in their bowling. Pakistan twice crossed 300 and another time were almost there. In the fourth ODI they would have gone beyond that definitely had they been batting first.

It is great to see a Pakistani legspinner after a long time dominating the batsmen in an ODI. Yasir Shah has indeed been a revelation on the tour. Definitely credit must be shared with bowling coach Mushtaq Ahmed who must have something to do with it though Yasir has inherent talent. Good to also see Ahmed Shahzad among the runs. He has been quite an outcast in the ranks especially with the disciplinary action against him following the World Cup.

The sad news is of course that Mohammad Hafeez has been banned for a year from bowling. It makes his place suspect when it comes to the stronger teams as his batting is suspect against genuine pace and swing and on tracks helpful to the bowlers. He can get away with his limitations on pitches like Sri Lanka with bowlers like Malinga on the wane. But when he comes up against Steyn, Anderson, Broad, Johnson, Starc and others of their ilk, he will struggle.

Imad Wasim stepped up for him in the fourth ODI and bowled excellently. He got the full quota of 10 overs and got the crucial wicket of Dilshan, clean bowling him with a deceptive ball. His action helps him confuse the batsman as with the same swing of the arm he manages to turn the ball either way. It’s a shame he wasn’t sent up to bat as he is an all-rounder. Instead of Sarfraz he could have been tried.

Shoaib Malik has stormed back as well. But his case is the same as that of Hafeez. This is not the best attack to test him on his comeback. Nevertheless he exudes confidence and appears far more assured than he did on his last couple of comebacks. But as I said his real test is yet to come.

What has been pleasing is the way Azhar Ali has batted. To his credit he has adapted brilliantly to the needs of the format. And he has kept a high strike rate without compromising on the good technique that he has. He has played with a straight bat and driven to find the gaps. More crucially he has rotated the strike.

Azhar has nevertheless yet to develop attacking instincts as a captain. He has to get that feel of when to put on the pressure especially when the game isn’t going his way. In the second ODI he could not be much faulted at the start as Kusal kept middling every hit and ran away with the run rate. But when he had got wickets and Sri Lanka needed only to play out the overs to get to the runs he failed to keep a slip as Pakistan could only win if they took wickets. Sure enough with seven wickets down and still some runs to get an edge from Chandimal, Sri Lanka’s last specialist batsman, went past a vacant first slip. Had Pakistan got him then Irfan would have been a handful for the tail.

With a series win under their belt Pakistan now go in for the T20s. This is anybody’s game despite Pakistan winning the Test and ODI series. But Shahid Afridi will be under pressure both as player and captain. Zimbabwe gave him a tough time in the two T20s they played at home and Afridi’s own bowling seemed ineffective. He is clearly in the last stretch of his career and has himself indicated that he might just call it a day even before the World Twenty20 in India next spring. PCB nevertheless might just ask him to carry on as his deputy Sarfraz may not be fully ready to make his debut as a captain at such a huge stage.

In fact it is to be seen if Sarfraz keeps wicket in the T20s. Afridi is not too fond of the ‘keeper perhaps because Sarfraz has missed a couple of crucial stumpings off him since his comeback. Normally he plays the first T20 of the series and is then replaced by Rizwan. This of course plays well into the hands of coach Waqar Younis who it has been shown has his own axe to grind against Sarfraz. But this time Sarfraz seems to have stumped well and has of course continued his run of form with the bat. It would be interesting to see how the ‘keeper plays out in these two T20s.