It is my suggestion that all stakeholders sit together. If any change is necessary it should be carried out with consensus. There should be no groups in hockey and we should work and play our role as one unit 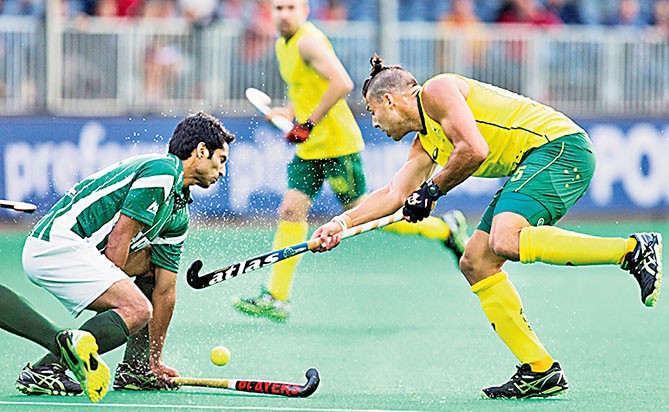 In the 27th PHF executive board meeting on 16th April, 2014, I was appointed coach of senior hockey team till Olympic Games 2016.

As the first phase of our rebuilding plan we conducted open trials throughout the country. As many as 670 players appeared in the trials. We short listed 55 players and invited them to a camp at Islamabad.

The initial days were very painful as the quality of the players was low. We had to recall some senior players.

Despite eight-week camp training not a single new player could make it to the squad for the Asian Games in Korea and. Before the Asian Games Pakistan team was considered as 4th team, after India, Korea and Malaysia. But the team played the final.

After the Asian Games, people started talking about the old days, as the team exhibited old days’ glimpses, by playing zonal attacking games.

This performance encouraged me to induct new players in the team for Champions Trophy 2014 in India.

We made efforts to enhance attacking and defensive abilities of the team. We had to play top eight teams of the world, but the problem with the team was less international exposure for the previous one and a half years.

Pakistan had neither played any tournament nor any bilateral series. Besides, no foreign team visited Pakistan.

In the initial matches of the trophy, our performance was not good but I was confident that the team was improving in temperament which is key to victory.

Eventually we beat Holland 4-2 and managed to reach the final -- after a gap of 16 years.

After playing finals of two major tournaments Pakistan improved their ranking from 11 to 10 which was encouraging for me.

When I met first time the Pakistan team I observed that they have accepted defeat as part of life. I tried to encourage them, telling them that the past glory of Pakistan hockey could be regained. This gave them a sense of honour. Then there was a visible change in their body language.

After the invention of turf and no man off side rule, field hockey has become one of the fastest outdoor sports. The speed of thought must be as good as speed of game. Triple T training was introduced through theory, team training and test. For this some revolutionary changes were made.

The field was divided into three parts horizontally to encourage big and small w formation for straight and zoom attacking for the handling of the ball inside the circle for finishing and follow up. This also restricted diagonal play which consumes more energy and takes further away from the goalpost.

The Pakistani attacking format is designed for the mega star who has the ability to beat one or two opponents for better opening. Keeping in view the standard of the available players the system of one plus one was designed. This system gives confidence to the ball carrier. The consumption of energy is divided into two players.

During attack a striker stretches the opponents without the ball whereas the midfielder uses the open space.

In modern hockey the role of midfielder has been doubled -- in attack and in defense. In defense the involvement of 11 players is good for defense as well as counter attack.

Most importantly the goalkeeper should act as custodian as well as sweeper.

In the past, many players were not tested in the match. I introduced rolling substitution timetable pro forma to use all eighteen players in a match. In each match 60 to 70 rolling substitutions were made which reduced the playing time of each player and prevented exhaustion till the end of the game.

After the excellent performance of the team in Champion Trophy in India, a comprehensive plan was submitted to Pakistan Hockey Federation for the preparation of World Hockey League, which were qualifiers for Rio Olympics 2016. It included more than 106 days involvement of the team for training camp in Pakistan and abroad and also bilateral series against India and participation in Azlan Shah tournament in 2015.

The first phase of the training camp was proposed from February 1, 2015, but due to local tournaments and financial constraints the first phase was started from March 16, 2015, for four weeks at Jinnah Complex, Islamabad.

But due to pathetic condition of the synthetic turf at Naseer Bunda stadium which cost injuries to 11 players out of thirty, we had to wind up the camp and restarted it on April 12, 2015, at National Hockey Stadium, Lahore.

The condition of the turf at Lahore was good but there was a problem of accommodation as initially seven or eight players were accommodated in stadium rooms on mattresses.

On April 25, one-day trials were conducted to select the team for a four-nation tournament in Australia from May 2-10.

The players were very disturbed when they were informed that they would get half of the daily allowance due to shortage of funds.  Their resentment was visible; a few senior players came into my room to talk about it. However, the matter was resolved amicably by giving assurance to pay back the balance by June 2015 (it is still pending).

After the tournament in Australia and a series in South Korea, we started camp training in Islamabad, despite knowing the pathetic condition of the synthetic turf at Naseer Bunda stadium.

The camp training could not be organised in Karachi due to the pathetic condition of the turf. Lahore does not have accommodation and gym facilities, so Islamabad was the only option.

The last phase of the camp started on June 4 for nine days. Trials were conducted on June 12 to select the team for the HWL. There was so much uncertainty as we were told that the funds were not released by the ministry.

Besides, visas for Belgium were under process. We received the visas on June 13 and the team left for Antwerp on June 15.

It was all contrary to my proposed plan, under which the team should have reached there four weeks before the tournament to get acclimatised and play five or six training matches against European teams.  It was also my recommendation that the team should be given 25-30 international matches to improve match temperament.

So in my opinion there were three major reasons which caused the debacle in Belgium and all my efforts of one year were ruined.

The proposed plan which I submitted to the federation included 106 days of training in Pakistan and abroad. It was reduced to 57 days in piecemeal manner.

Moreover, only 10 international matches were provided ahead of the qualifiers.

The players were extremely disturbed owing to financial problems as they were not offered any central contract. They were not even paid foreign and local daily allowance.

The missing ratio of the opportunities was very high as per statistics. Pakistan got 60 to 70 circle penetration in the seven matches but managed to score only nine goals which is less than 20 percent. With this ratio a team cannot win matches in such a high-level tournament.

The handling of the ball inside the circle and missing of the opportunities dented the confidence of individuals. It also put pressure on our defense line which came under pressure, made mistakes and conceded goals.

In the first phase, in Islamabad, the actual duration of the camp was four week but we had to wind it up on April 2 due to injuries to 11 players. So our camp continued for only 15 days (including rest days)

In the second phase, in Lahore, the camp continued for 13 days, which included one day of trials.

In the third phase, we held a training camp after returning from Korea, in Islamabad, for nine days, which included one day of trials.

So we had a total of 37 training days and 10 days each in Australia and Korea against the proposed 106 days.

There is no coach in the world who can win every tournament. I took over the charge of the team last year when it was ranked 11th.

The government has established a committee to find out the reasons of Pakistan’s failure. Had this committee been established six months ago, the present situation could have been avoided.

I suggest that all stakeholders sit together. If any change is necessary it should be carried out with consensus. There should be no groups in hockey and we should work and play our role as one unit.