A good deal of relief 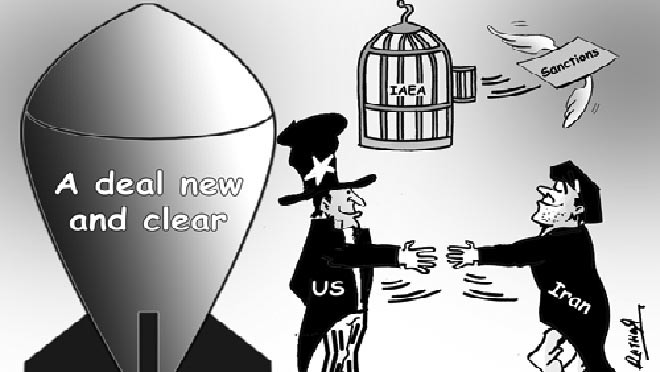 The Iranian nuclear deal inked on July 14 is not only historic but has come at a time of great cataclysms in the wider Middle East and Afghanistan-Pakistan region making the agreement potentially consequential. The deal is going to have immediate and far-reaching impact on the political, economic and security situation in both the regions.

Under the terms of the agreement, Iran has practically given up the struggle to get a nuclear bomb by acquiescing to stop uranium enrichment to produce Weapons of Mass Destruction (WMDs). In return the West and UN would lift economic sanctions on Tehran. However, the lifting of sanctions would not be immediate and may take more than a year to happen subject to the implementation of the promises Iran made in the agreement.

The nuclear deal is going to ease decades’ long tension between Iran and the West, which further destabilised the Middle East and the Gulf region and crippled Iranian economy. There are some quarters within Iran and foreign sympathisers that say by compromising on nukes Iran may also have compromised its future security. But here it must be understood that security is a multidimensional and a holistic concept and only military strength, including nuclear weapons, cannot guarantee a state’s security. Former Soviet Union is a case in point, which could not prevent its dismemberment despite having the largest number of nuclear weapons.

The pursuance of nukes by Iran left its economy lacerated, its society extremely divided between ultraconservative political and state leadership and the majority western-oriented population. This has seriously affected the overall security and stability of the Iranian state and society. The weakening of the Iranian state and instability of its society meant profoundly volatile Middle Eastern region including Afghanistan and Pakistan. Various writers and scholars since long consider Afghanistan and Pakistan parts of the Middle East.

Coming back to instability in Iran and its links to the whole region, arguably Iran has been one of the most stable states of the entire region. As Iran or its forerunning territorial arrangement known as Persia has been playing a very active role in the politics of the entire region for centuries, it kept on doing so since economic sanctions were clamped on it by the West. In fact, since the overthrow of the hereditary monarchical rule of Shah of Iran, led by religious scholar Ayatollah Khomeini in 1979, the gulf between the West and Iran has been widening for obvious reasons. Since then Tehran has been doing everything to oppose and hit Western, particularly American, interests in the region and for this it had also lent support to militant organisations like Hezbollah.

Although generally considered as a Shia state, supporting Shia regimes and people across the World, Iran gave breather to vehemently anti-Shia outfits like the al Qaeda and the Afghan Taliban due to their anti-Western stance. Now with the revival of Iranian economy and expected strengthening of its political institutions, the Iranian state would most probably reclaim its lost viability. This would have salubrious impact on the overall security and political-economy of the region.

After the lifting of sanctions, Tehran would not like to entangle itself in regional conflicts like the Syrian civil war, Afghan civil war and Shia-Sunni power struggle in Iraq or for that matter the ongoing crisis in Yemen.

Importantly, the West-Iran nuclear deal has come at a time when the militant Islamic State (former Islamic State of Iraq and Syria) has been on the rampage in the Middle East. The radical Sunni and anti-Shiite group has posed existential threat to the very survival of several states in the Middle East after it established its own dispensation named as ‘Islamic Caliphate’ on the large swathes in northwest Iraq and eastern Syria, vowing to extend the caliphate to the nook and corner of the world. With the revival of Iran’s economy and political clout after the lifting of sanctions, Tehran would be able to play a more proactive role in the stability of the region. Although Iran’s becoming part of the international coalition against the IS may be difficult, it could coordinate its efforts with the latter.

The revival of Iranian economy and its political stability thereof in the aftermath of the nuclear deal would have very wholesome effects on Pakistan and Afghanistan. The foremost positive effect would be that Iran would like to meaningfully contribute to the stability of Afghanistan so that a bigger market could be created for Iran there. Lifting of sanctions would necessitate exporting surplus commodities and energy, which Iran has in excess. Reconstructed Afghanistan could be a big market for Iranian energy and products.

The impact of Iranian nuclear deal on Pakistan could be very extensive. The most important consequence in this respect is the revival of the stalled gas pipeline project known as Iran-Pakistan Gas Pipeline. Iran has already constructed its part of the pipeline while Islamabad shied from building the pipeline on its own soil making different excuses. But the most important problem for Pakistan has been the US and UN pressure due to sanctions on Iran and also Saudi pressure to scuttle the IP project. At least after lifting of the sanctions on Iran most of Pakistan’s problems with the project would stand resolved. Resultantly, Pakistan would get the Iranian gas.

The nuclear deal has come at a time when China has signed deals investing $45 billion in Pakistan including the mega China-Pakistan Economic Corridor (CPEC). As the route of CPEC from Gwadar on its way to Chinese province of Xinjiang would move upwards in a straight line towards Dera Ismail Khan in Khyber Pakhtunkhwa, a considerable part of it during this course would be constructed quite close to the Iranian border.

As China has an objective to link South Asian, Central Asian and Gulf states with the project so that to get oil and gas from the latter two regions, lifting of economic sanctions could go a long way in economically integrating the three important regions. Seeing this India would repent its earlier decision of withdrawing from the IP project, of which earlier it was a part. However, to get real benefits from the revival of Iranian economy, Delhi would have to improve its relations with Pakistan.

So the benefits of the West-Iranian nuclear deal for the entire greater Middle East are numerous and all the states of the region must try to get the best out of the unfolding situation.

A good deal of relief