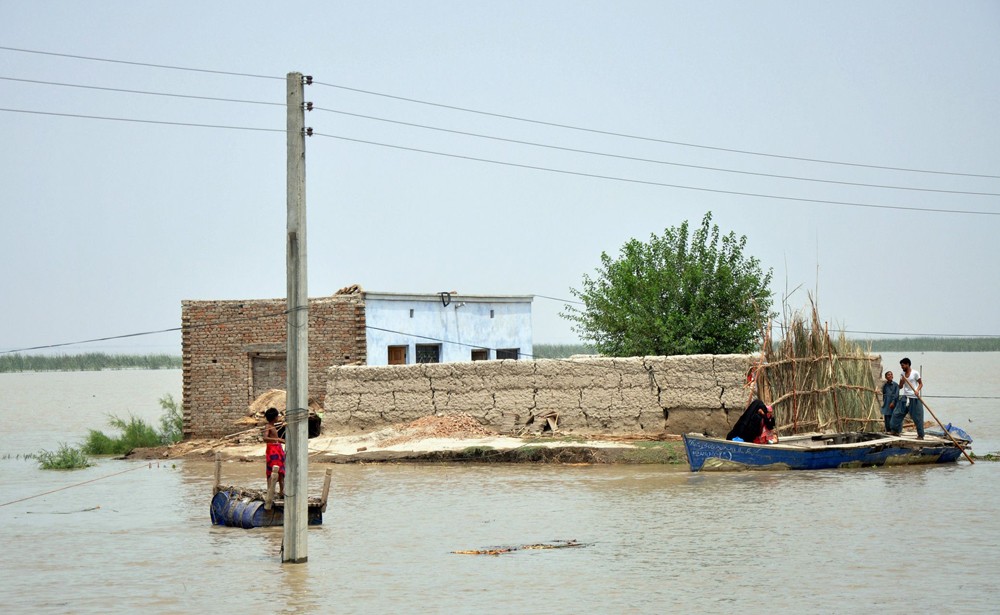 Scores of deaths and tens and thousands of helpless people displaced and tv channels showing inundated villages and ‘large-scale’ relief camps in the affected zones… the flood season is upon us again.

Till the filing of these lines, 12 people have been killed in Chitral in Khyber Pakhtunkhwah province while millions of acres are flooded due to heavy rains in Balochistan and South Punjab. The recent rains have affected at least 300 villages in KP, according to provincial disaster management authorities.

The PDMA authorities have termed these torrential rains in the north of KP unusual.

More than 200 villages in Layyah, Rajanpur and Muzaffargarh districts have been flooded with water from rivers Indus and Chenab. Roads, bridges and water schemes have been washed away in the Chitral region.

As usual, the focus seems more on the post-flood relief work than on preventive measures. The attention is on relief goods and camps for the affected people than on creating awareness about climate change and flood dangers in risk zones.

After the devastating floods in Pakistan in 2010, the Meteorological Department planned to install modern radar systems for predicting accurate weather and to correspondingly warn the concerned government bodies.

"About Rs300 million were allocated in 2014 for the four radar systems in the provinces. Those radars were planned for Chitral, Cherat, Kalpani (Mardan) and D.I. Khan," says Muhammad Riaz, Chief Meteorologist of Pakistan. They are still awaited.

Currently, the Meteorology Department can only predict weather patterns of up to four days in advance. Weather radar systems do not cover our eastern rivers, catchment areas in most parts of Khyber-Pakhtunkhwa, Gilgit Baltistan, Kashmir and important coastal areas of Balochistan which are vulnerable to cyclones.

The Meteorology Department can only predict weather patterns of up to four days in advance. Weather radar systems do not cover our eastern rivers, catchment areas in most parts of KP, GB, Kashmir and coastal areas of Balochistan.

Muhammad Riaz says the information about any flood emergency is released only 24 to 48 hours before the disaster is likely to strike and passed on to the relevant government bodies. "Pakistan needs to strengthen its radar network, ground observation system and enhance the numerical model to predict floods well in advance for forecasting floods".

The process of installing a new radar system is still under way. However, he claims, the department is not too bad in forecasting about the systems with present equipment. "There is no blunder so far," he maintains.

Pakistan’s flood warning system is quite complex. The Met office is responsible for informing only the relevant departments. Preparation to minimise the loss is other departments’ job. The warning from the Met office goes to WAPDA, SUPARCO, Federal Flood Commission, Indus Water Commission, the national and provincial disaster management authorities, provincial irrigation departments and district officials.

Lack of coordination among the concerned departments and poor implementation of policies multiplies the loss of life and property in emergencies like floods.

This region has a history of continuous floods. One of the worst floods in River Chenab in Pakistan’s history was in 1957. With the increase in population, the scale of losses is far more now than in the past.

Floods in 2010 and 2011, according to the World Bank and Asian Development Bank findings, caused damage worth $10 billion and $3.7 billion, respectively. Another study shows that the 2010 floods in Pakistan could have been predicted if the data which originated from the European Centre for Medium-Range Weather Forecasting (ECMWF) had been processed and fed into a hydrological model which takes the terrain into account.

On the other side, the government has ignored the flood commission report of 2010 in which strong measures were suggested to reduce devastations caused by the floods.

The Supreme Court, recently issued directives to the authorities concerned to develop integrated flood management plan to avoid any untoward incident as a result of present spell of monsoon in the country.

"Pakistan needs to frame right policies and practices to confront natural calamities and to avoid disasters at such a scale," Suleri says, adding, "Even last year (2014) the human and infrastructure losses due to the floods after unusual rains clearly reflect challenges in disaster preparedness, disaster prevention. It also indicates that we are not ready to learn lessons from the past."

The SDPI head reiterates, "The real challenges are to develop proper mechanisms, make dams and reservoirs, and ensure effective governance system to get ready to cope with natural calamities -- to minimise human disaster".