Numerous people die every year while swimming in the canal, due to severe head injury or drowning. There is also the imminent threat of becoming infected by harmful pathogenic bacteria. Could imposition of Section 144 help? 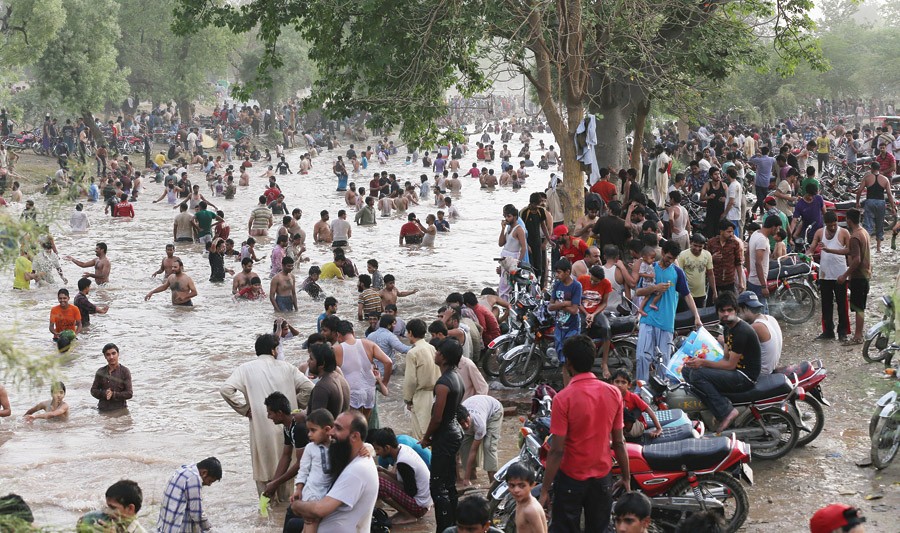 Around three weeks ago, Section 144 of the Criminal Penal Code of Pakistan was imposed on certain portions of the Lahore Canal by the Civil Defense and District Commissioners’ office (Lahore), disallowing individuals from swimming in the canal. The specific areas of the canal where it has been implemented and is currently being enforced consist of Mughalpura, Muslim Town and Johar Town, amongst others. Swimming is permissible in any area of the canal that is not included in these districts.

Residents of the city are no stranger to the fact that the water flowing in this canal is insanitary; with large sewage pipes draining into it at several points along with bacterial contamination that may lead to the contraction and spread of diseases such as Polio and Hepatitis. Anyone swimming here is at an imminent threat of being infected by harmful pathogenic bacteria or developing skin rashes. However, we often forget that at the same time, numerous people die every year while swimming in the canal due to severe head injury or drowning. This in fact is a reality that claims more lives per year than can be accounted for through the spread of diseases and toxicity in the canal.

It also happens to be an immediate, avoidable and untreatable form of death. While the latter is, indeed, a grave issue that seeks government attention and requires long-term solutions, the former is often overlooked. It is with this situation in mind that Section 144 has been implemented to restrict swimming in certain parts of the canal.

The canal was never built for swimming. The reasons why it is currently being used for this purpose include excessive load shedding during the summer and lack of accessible, public recreational facilities available to the common man. However, the canal by its very virtue poses a risk to people who swim in it, therefore leading to numerous deaths.

According to Captain (retd) Dr Usman, DCO Lahore, "There are certain sections of the canal that are narrower and deeper than others, causing water pressure to increase. The overhead bridges here are cemented and located at a significant height above water surface.

"At several points, the bottom of the canal is an uneven surface, often containing large amounts of lodged silt and large rocks that cannot be seen from the water surface above."

Tariq Zaman, from DCO’s office, adds to the information, saying "there are large sewage pipes present underneath the surface of the water along with shallow waterfalls."

As a result, when the swimmers dive off the cement bridges and banks they hit the rocks and pipes below the surface. Since many do not know how to swim, they end up drowning due to the depth and high pressure of the water. It is difficult to control large numbers of swimmers who push each other off bridges and dunk each other’s heads in an already dangerous area of the canal. Which is why it is in these regions that swimming is not permitted.

For us to ever see a canal in which people are not swimming but boat-riding or sitting on the banks (as is the case in other cities containing similar water bodies), there will have to be alternative facilities provided to them.

While this is not the first time Section 144 has been implemented on the canal, this year’s enforcement looks more promising than the other times. Captain (retd) Dr Usman says, "Civil defense and police joint teams are enforcing the swimming ban. Each team consists of two persons from the civil defense and two from the police. Alongside, there is a town officer present in each team. They are present on either side of the canal in those designated areas, one kilometre apart. They are fully equipped with lifejackets, ropes, air tubes and other amenities needed to prevent the unnecessary loss of life."

An unofficial survey conducted by the same authorities reveals that on an average summer day there are approximately 45,000 people swimming in the canal. This data was collected between the peak rush time, that is between 2-4pm. When questioned about the success these teams have had, Dr Usman says, "In the past three weeks since the project was fully implemented, there have been two major breakthroughs -- no casualties have occurred, and the no-swim-zones show no or controlled swimming. On week days, there are usually 20 teams deployed. However, on weekends, there are about 25 due to the increase in number of people."

As of right now, expecting people to give up swimming in the canal altogether is not on the table. It is not as if these people are unaware of the fact that canal water is unclean; many know but have no other way to beat the heat. Others believe that running water is clean and even more have no access to clean water otherwise.

However, this step may be the first in a long-term programme to prevent people from using the canal as a swimming pool for their own safety and wellbeing. It is essential for such government policies to be people-friendly. For us to ever see a canal in which people are not swimming but boat-riding or sitting on the banks (as is the case in other cities containing similar water bodies), there will have to be alternative facilities provided to them.

Alongside, bring about changes in their mindset and socio-cultural norms so as to not perceive the canal as a safe, open swimming area rather as an accessible scenic water body. Barring certain areas of the canal in this way paves the way for this realisation and optimises their own safety. Any perpetrators of the ban are taken to jail and usually let off with a monetary fine.

So, the question is what is the next step that should be taken to reduce the danger the canal poses to the people? Many housing societies and private businesses dump their sewage into the canal, starting from Harbanspura. While it is illegal to do so, the societies have been set up. There is a need to develop a sewage plan for them.

According to Zaman, "Some 3-4 years ago, there were 25 sewage pipes that emptied into the canal; now, 22 of those no longer end in the canal but rather into the parallel drains that have been established for them."

Captain (retd) Dr Usman further elaborates that establishing alternate sewage drainage plans for any societies’ sewage that runs into the canal is a part of its ADP and hopes to be carried out.

He further adds, "Ideally, if there is, at some point, no sewage discharge into the canal, it can still not be considered clean, swimming water. From BRB to Jallo and even after that, buffalos swim in that water along with possible marine life. It contains animal waste along with human trash, becoming a reservoir for bacteria and viruses. While it will be less toxic, its cleanliness will not be at a 100%."

For this policy, and all others that may follow it, it is necessary that the change comes from within people’s minds and is followed through by higher authorities. Providing the common man with facilities that they have been denied coupled with people-friendly policies is the only way to save the people.