An architectural wonder, 25 feet under

Neevin Masjid inside Lohari Gate is an incredible, albeit forsaken, piece of art 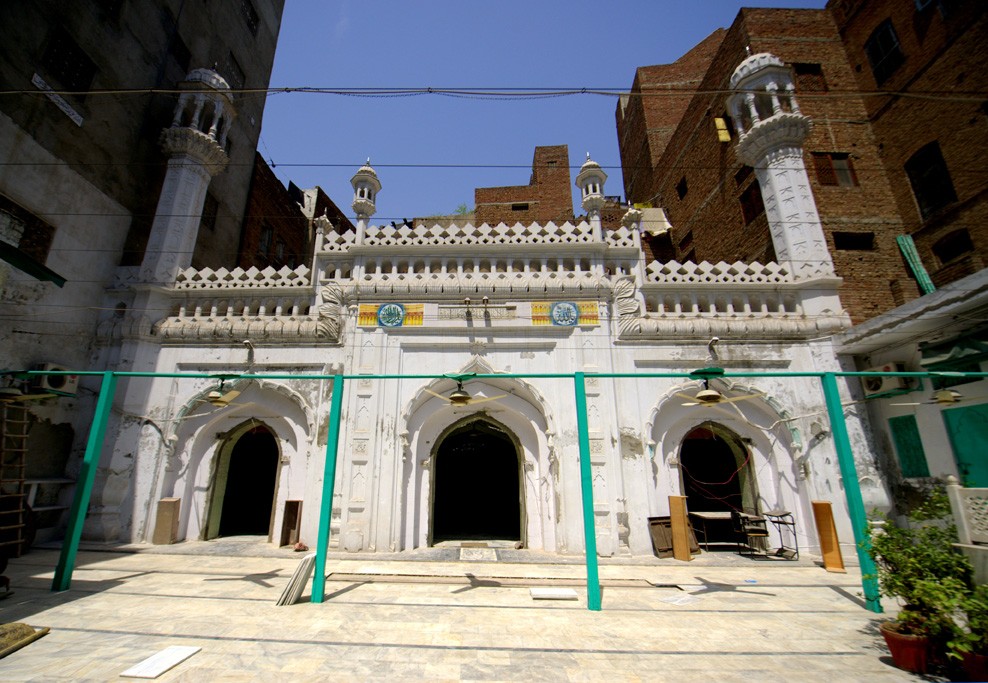 Imagine a building with an open courtyard constructed 25 feet below the street level. Lohari Gate is home to one such building -- a mosque, thus named Neevin Masjid.

Entering from the Fort-like Lohari Gate, crossing Naya Bazaar near Chowk Matti, you find this unbelievable piece of art. The mosque can also be accessed from Shah Almi Gate through Paparr Mandi.

A small entrance to Neevin Masjid is seen at the street which takes one down to the mosque via a case of stairs. The inscription at the entrance of the mosque reads "Jamia Karimia Neevin Masjid." It is one of its kind in the India-Pakistan subcontinent and, in fact, in the entire world.

It is said that the mosque was constructed during Lodhi’s reign in 1460. Hence, there is an evidence of the existence of Lahore during the Lodhi period. As per historic accounts, the mosque was built by Zulfiqar Khan who served as the Governor of Lahore Haybat Khan in the 1460s. It was built in Koocha Dogran.

Another historic account by Dr Abdullah Chughtai claims that the mosque was built after demolishing a temple. That is why the structure and ground level were not changed.

Chughtai establishes his argument by quoting the examples of different temples that were traditionally built below the street level in ancient times. The Neevin Masjid is different also because of its structure that speaks of a pre-Mughal construction style. The other mosques seen in Lahore or any other part of the subcontinent are either on ground level or on a raised masonry.

As for water drainage in rains, references say that two wells or septic tanks, called ‘gharki’ in Urdu, were dug. These have been functional since the mosque was built more than five hundred years ago. The water used in the mosque for ablution and toilets goes into the wells and is dispensed with thereon.

The structure of the mosque is intact and does not have seepage issues. Another gharki was found during some restoration work in Chowk Wazir Khan a few months ago. It is likely that the system was evolved in ancient times in order to control the flow of water.

Unlike other mosques, Neevin Masjid underwent no change during the Sikh or British rules. The use of Badshahi Mosque, Sonehri Mosque, Mariam Zamani, Moti Masjid and many others was changed under different rulers but the sanctity of Neevin Masjid was never harmed.

The mosque suffered setbacks during an earthquake in the early 1900s. Its minarets were reconstructed and, later, whitewashed. The painted glass is also a renovated part of the mosque.

The prayer chamber of the mosque is beautifully adorned and can accommodate almost 100 people.

It is at present a functional mosque. But there is a rub: the mosque is not owned by a government department in Punjab. It is managed by the local community and the mosque Imam. There is no funding or even a visit from the government officials and no one has ever asked for it.

Finally, Neevin Masjid merits being declared a protected monument by the Archeology Department. Besides, it should be made a part of the curriculum of architecture and engineering. This can also be a self sustainable model, in case the government is not willing to invest in its maintenance and upkeep. The mosque should be open to tourists and photographers. This will help generate funds for the management.

An architectural wonder, 25 feet under

Jogi — a tale of sacrifice

Politics over climate change? Any day

Gone to the dogs