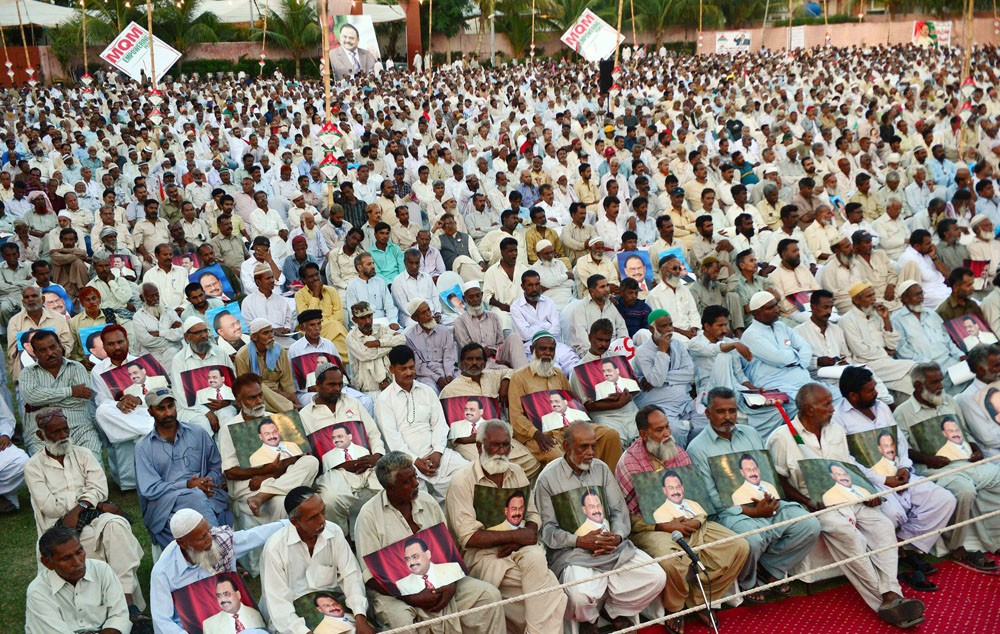 The Muttahida Qaumi Movement (MQM) stands at crossroads, no exaggerating it and no other way of putting it. The party faces its biggest crisis ever since its formation during the General Ziaul Haq era.

For the MQM, media trials, court cases and investigations are nothing new. But that is until now, for the investigations the party is facing in the UK are unprecedented. The recently released two documents have caused a storm in Pakistan, and have indeed marked the beginning of a different phase in the MQM history.

The furore makes sense when a Scotland Yard document alleges that it suspects the MQM has been receiving funds from the Indian government to run its operations in the UK and Pakistan. The allegations first surfaced in a BBC report, which alleged that the two senior MQM leaders -- Tariq Mir and Sarfraz Merchant -- had confessed under oath during an interview to the Scotland Yard that they had received funds from the Indian government.

While the MQM was disputing the claims and casting aspersions on the BBC sources, an alleged interview of Tariq Mir that was held by the police with reference to the Dr Imran Farooq case in 2012 appeared on social media. Large parts of the interview were redacted but the ones not redacted showed Tariq Mir allegedly accepted during the interview to the Scotland Yard that the MQM leadership held extensive contacts with the Indian spy agents from their premier spy agency RAW, held meetings in different cities in Europe.

When TNS contacted Tariq Mir, he replied that he could not deny or confirm the authenticity of the content, and was surprised that such a thing had surfaced.

The MQM came under intense pressure. The link that had long been suspected was finally admitted by one of its key leaders. But, the MQM took a sigh of relief when the Scotland Yard released a statement saying that it didn’t recognise the document as a "genuine police document".

The statement received much publicity in Pakistan. The MQM claimed that it was once again vindicated and what was being said about its links with India was in fact a media trial.

Interestingly, what was not noticed was that the Scotland Yard did not deny the existence of the Tariq Mir interview; rather it was not prepared to discuss the content of the interview.

"Why was it that the police knew so much about foreign funding dating around at least 10 years yet did nothing about it. The police has a lot to answer too."

Only a few hours later, another document surfaced on social media in relation to Sarfraz Merchant’s pre-interview briefing. Sarfraz Merchant is amongst those who are being investigated for money laundering; others are Altaf Hussain, Muhammad Anwar, Tariq Mir and few others.

Merchant told TNS that the document was genuine and was leaked by two of his associates.

The documents stirred a storm -- because they not only vindicated the BBC story but also verified that the MQM is actually being investigated for receiving funds from the Indian government and the view of the UK investigators that properties, assets and cash belonging to the MQM are of criminal nature because they are obtained through the prohibited funds.

The document also confirmed the Mir and Merchant had accepted in police interviews that they received money from the Indian sources for their operations.

Scotland Yard has confirmed to TNS that the content of the documents are genuine.

This means that the MQM is under probe for a number of offences -- money laundering, breaking electoral laws of the UK and Pakistan, getting money from prohibited sources, evading tax and corrupting the British economy through ill-gotten money.

It must be stressed that there are no charges against the MQM at this stage but if charges are brought forth then evidence will be discussed in an open court of law where all the documents and other details will be made available. There is every chance that the Pakistani authorities will come under pressure as well -- to take action under Pakistan’s electoral laws and seize several properties in Pakistan if the UK government seizes properties that it thinks have been acquired through Indian money.

But Dr Imran Farooq continues to haunt the party. It is clear that Pakistan is now ready to hand over at least two men -- Moazzam Ali and Mohsin Ali Syed -- to the British authorities. Moazzam Ali Khan helped sponsor the hit men to the UK and Mohsin Ali Syed is the hit man who is now detained and the Scotland Yard will soon get access to grill him. It is likely the two or only Syed will be extradited to the UK for a trial.

Now that will be another nightmare for the MQM, as several people directly or indirectly associated with the MQM will come under the scanner.

Mahtab Aziz, Consultant at Duncan Lewis Solicitor, told TNS that the Scotland Yard have hard questions to answer. He said that Tariq Mir’s police interview and the revelations contained within that interview have serious consequences for any one who was privy to that information under S.38B of the Terrorism Act 2000. "In that where a person comes to know of the preparation or facilitation of acts of terrorism (this transcript clearly reveals involvement of India in sponsoring terrorism in Pakistan) then unless that person brings this information to the knowledge of the police then he/she will be guilty of an offence."

He adds, "Now clearly it was the police that interviewed Tariq Mir but there are two interesting aspects here. What did they do about it? In addition the solicitor who was privy to this information also has a duty to report the matter if the police did not take it further. Secondly once this information was revealed during the ‘caution only’ (apparently Mir was not under arrest) why did the police not stop the interview and immediately arrest Tariq Mir and then further question him under caution for terrorism offences?"

He also asked why was it that the police knew so much about foreign funding dating around at least 10 years yet did nothing about it. He adds that the police has a lot to answer too.

So, the coming times are indeed interesting.

On the next page: Who is Tariq Mir?

Who is Tariq Mir?

Tariq Mir came to the UK from Pakistan around 40 years ago as a student. His parents lived in Lahore and were mohajirs (migrants) from Delhi.

After qualifying as a chartered accountant, he joined a multi-national company in London and didn’t return to Pakistan after the completion of his studies. Tariq Mir is related to Muhammad Anwar through Anwar’s wife Bida whose father was a close associate of Muhammad Ali Jinnah. Muhammad Anwar ran his own accountancy firm in London which Tariq Mir joined as a partner. The firm was called ‘Anwar and Mir’.

Altaf Hussain arrived in London in early 1992. That was six months before the Karachi operation began. Tariq Mir became part of the MQM after meeting Altaf Hussain. He has been looking after the party’s financial affairs ever since. Hussain set up his base at the office of Anwar and Mir when he began life in exile.

Mir has been among the most influential party leadership. He was first made a member of the party’s International Secretariat and was then included in the Rabita Committee.

Tariq Mir, a refined man, has good command over English and knows the UK system well. It was in this context that alongside Muhammad Anwar he grew close to Altaf Hussain and his influence shot up in the party ranks.

He also looked after the personal accounts and administrative matters of Hussain, appointments with doctors etc.

TNS understands that Tariq Mir was only answerable to Altaf Hussain on financial matters of the party and the Rabita Committee didn’t have authority to hold him accountable or ask questions.

Tariq Mir was made incharge of the MQM’s charity called ‘The Sun -- society for the unwell and needy’ and looked after all matters related to Khidmat-e-Khalq Foundation. He served as the KKF president but was removed from his post to accommodate Mustafa Kamal.

Tariq Mir was arrested in the first week of December 2013 by the Scotland Yard investigators from his central London home. He remains on bail. He has not been active in the party ever since, and sources say that he was asked to withdraw from his position. He was Chancellor of the Nazir Hussain University Karachi but was made to resign.

He is now under investigation for money laundering alongside Altaf Hussain, Muhammad Anwar and others.

He is said to have been a blunt man in the party who many time said difficult things on the face of Altaf Hussain which no other leader dared to say. On several occasions, he spoke his mind without any fear and took dissenting line from the party, without mincing words.

Many in the MQM believe that Mir may have said too much while speaking to the police and the answers suggest his style of interaction.