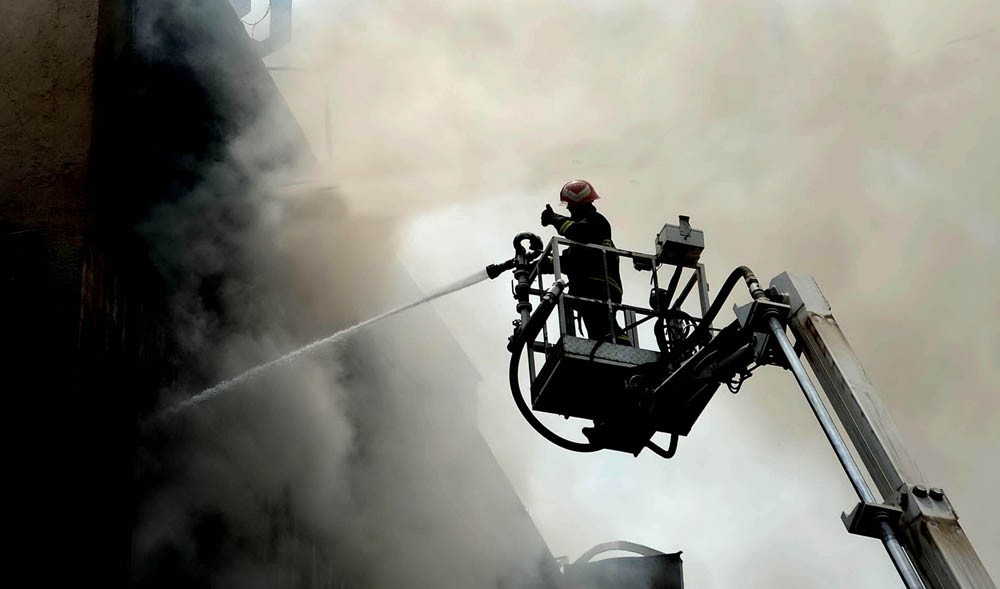 An accidental fire engulfed a departmental store in Liberty Market in Lahore on June 15, 2015. This unfortunate incident added to the tally of several major and minor incidents that have impacted the life and property of citizens. In May this year, six children lost their lives in a house fire in Shadbagh area in Lahore. Thirteen people died in December 2014 in New Anarkali in a blaze apparently caused due to electric short circuit.

Such incidents and related issues need a farsighted approach and a permanent solution as they directly impact the safety and security of human life, especially the poor and working classes.

Disasters like the recent factory blazes are caused due to many reasons. Unsafe methods of storing inflammable articles like textiles and stitched clothing are one dimension. Acts of mischief and crime cannot be ruled out, though scientific inquiry is a pre-requisite. Factories and commercial buildings are seldom repaired for the various electrical and plumbing defects that they progressively develop. Since the owners and managers are only interested to spend minimum to optimise the returns, workers are asked to continue without addressing faults such as leakages, sparks in wiring or malfunctioning of worn out conduits.

Many premises -- established in commercial or residential areas -- do not even bother to acquire power connections commensurate with actual load of consumption. Similarly, layouts and placement of work stations do not guarantee safe evacuation. Few exits to the exteriors cause danger of stampede and trap situations. Lack of ventilation and inappropriate orientation render such structures suffocating and dingy. Garment factories, mechanical, embroidery outlets, stitching shops of various scales and profiles abound in congested inner city areas that can face similar hazards.

The Lahore fires should serve as the final reminder to plan and implement measures ensuring workplace safety and security. The foremost task is to update the information and data pertinent to production, retail and warehousing spaces. The federal and provincial bureaus of statistics have several surveys already done in the past which can serve as a baseline.

A municipal project may be formulated to update and enhance this data base, besides building information parameters, especially related to human safety. Existing building bylaws and regulations in various places may be revisited for initial scale application. Most of them have provisions for safety which only needs to be effectively applied.

A fire safety survey may be conducted in the locations and areas where fire complaints and hazards have been registered on a recurring basis.

A checklist-based evaluation of existing building stock can help identify the inappropriately constructed buildings for the purpose of retrofitting. Few specialised teams can be mobilised to design and facilitate these tasks on an emergency basis. However, cooperation from all the stakeholders is a pre-requisite in this respect. Trade and commerce bodies, political parties, building control authorities, labour unions, technical universities and media shall have to work together to approach this vital objective.

Heterogeneous and complex urban regions such as Lahore have many typologies of building stocks which need safety and security audits through collaborative administrative agencies, professionals and even ordinary people. Warehousing and basic manufacturing activities in old town quarters, squatments along railway lines, high tension wires, highways, busy urban roads, manufacturing units, godowns of hazardous items, petroleum installations, oil depots, power stations, nullah banks and garbage dumps are some of the sites where people can be found to live in a fairly organised but dangerous manner. The labourers of various ranks and profiles can be spotted sleeping on pushcarts, footpaths, shop fronts, curb sides, parks, traffic, islands/medians, edges of the boundary walls and under flyovers could all become targets of hazards of similar proportions.

In the public sector, the Civil Defence Department has become near moribund. It had many important roles to play that comprised training at various levels, preparation drills, maintenance and operation of a basic warning system and proper record keeping of its outposts. It needs an overhaul. Fashionable national scale bodies such as disaster management authorities with hefty budgets must be asked to assist in its revamping and upgrading. High sounding devices such as surveillance cameras and control centres are being set up by different layers of administration with duplicated functions and duties. They need to be coordinated to relay much needed information during rescue operations. Few basic inventories also need to be prepared.

A fire safety survey may be conducted in the locations where fire complaints and hazards have been registered on a recurring basis. Causes of fire and combating capabilities, route planning for hazards, emergency reservoirs of water and mapping of storages of inflammable materials could be few of the starting variables. Fire departments must be bolstered by adding hardware, rescue equipment and hindrance free access to hydrants.

Safety of ordinary folks is the prime determinant of the performance of various tiers of administration. It is sincerely hoped that these incidents of fire will be the last of their kind and scale!