"They walk as if they carry feathers on their back"

Interview of film maker Iara Lee who celebrates the porters 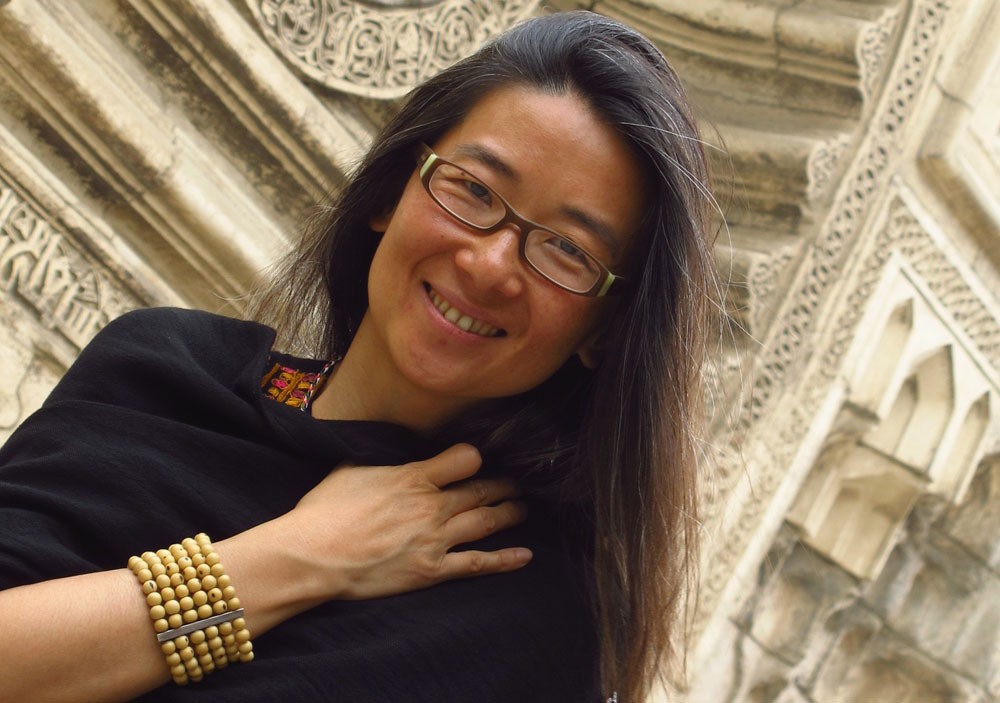 A mountain climber risks his life for thrill and adventure. For a porter, unskilled, unschooled luggage caretakers of the famous K2 trek, it means livelihood. This is one of the few possible ways of earning for them.

The stirring film, titled K2 and the Invisible Footmen celebrates not the mountaineer but his counterpart, the luggage porter, the unsung hero. The film, which was aired in Pakistan’s first Mountain Film Festival from June 13-14 in Lahore, received audiences in numbers beyond the organisers’ expectations, with standing ovations at almost all screenings.

The khurpa or porters belong to some of Skardu’s poorest villages and those such as Ali Mehdi to whom the film is dedicated, have served the profession for over six decades.

Talking about the issue, the film’s Brazilian Director Iara Lee lays emphasis on the pursuit of ‘dignity’. She brings an intimately human face to his being, not letting us see him as a victim but as a warrior, treating the issue with a sensitively engineered mix of humour, respect, and reality.

The News on Sunday (TNS): You define yourself as an activist and a filmmaker, what comes first? And what are your political leanings?

I work with the bottom of the bottom. People like refugees, war victims, abused children etc. If you’re poor, you still have the option of working to improve your life. But in a situation where you are a victim of let’s say war or occupation, you are helpless.

Of course, with the K2 porters, it’s not a helpless situation. There are ways of helping them find dignity.

The film is my gift to Pakistan -- a country I love and respect very much. It was a dream for me to film this trek. My friends told me to document this journey and not just do an adventure film on the K2 trek.

So I invited trekkers and a film crew that was entirely Pakistani. All of a sudden, we had a hundred people heading to the base camp.

The occasion coincided with the 60th anniversary of the first ascent to K2 by an Italian mountaineer. Ali Mehdi, who had helped the Italian climber, lost his toes to frost bite. So, I have dedicated the film to him, and to the true unsung heroes who are the martyrs, the indigenous people who are the pioneers and the first ones to die trying to help their clients. There are so many stories within stories.

Read also: For the love of  mountains

TNS: Was your path to filmmaking planned or accidental?

IL: I used to run a film festival in Brazil in the 1980s. After I went to the New York University, I started making short films. I got into art for activism. Now, I am trying to empower the new generation of filmmakers. I see film as a tool for respect and compassion.

TNS: What brought you to Pakistan?

IL: I first came to Pakistan in 2000. We visited an Afghan refugee camp in Peshawar, where [refugees] threw stones at us. I thought, ‘why are you doing this, we’re here to help’. They were angry and saying, ‘no more photos, no more cameras!’ And that’s when I realised that you cannot just produce media. You have to do something beyond that. Create initiatives to support people. Translate it into anything positive. Pakistan has been a love affair for me. After that first visit, I came back a whole 10 years later in 2010. In 2013, I got to travel through the country and was astonished with the diversity and architecture. I then made a short film on the Kailash, and now K2 and the Invisible Footmen.

When I say I’m going to Pakistan, people think I’m going to hell. They don’t realise that here it is safer than it is in Brazil, where there is a lot of urban violence. Here there is none of that. But the bomb blasts make news. Politics taints the reputation. But most Pakistanis are peace-loving people.

TNS: Did you undergo training as a mountain climber to access K2 or had you done the trek before?

IL: I first went to Shimshal in winter to get myself trained in trek. I’m a trekker but I still needed training for K2.

TNS: What was the process and its challenges?

IL: K2 is just long-walking -- on a glacier, getting to the base camp about 5000m in elevation and carrying equipment. In the day, you have sunstroke, in the night its freezing cold. Then altitude sickness and vomiting… It’s almost comical. It was a tough journey. Everybody came back strong. But the porters walk around in rubber sandals as if they are carrying feathers on their backs. Most touching is their humour, they just never complain. They know life is tough, but their resilience is amazing, and I became an admirer of their strength.

Filmmaking is difficult because it’s a long process. You need a lot of stamina to travel. The filming took a month. It was entirely edited in Islamabad. So I spent almost a year here. There is pre-production, production, post-production, and then promotion. The outreach work is a lot. A lot of great films are made but they just sit there. I try to put in a lot of effort in the promotion, to make sure the film is seen by as many people as possible.

In the case of this film, we were expecting a couple of hundred viewers but more than a thousand turned up. We had to have parallel screenings and extra-screenings, for which I’m very grateful to the audience and supporters.

TNS: How was the project funded?

IL: The project is self-funded. I use my commercial work earnings to fund my non-commercial work. So I’ve been very lucky. Of course, we work very low budget, very down to earth.

TNS: In the film the porters seem very comfortable with the camera and with talking. How did you reach this comfort level with them?

IL: It was one-month-long trekking, almost seven hours a day, so we became like a family. As the director, I was the only foreigner in the team. And because it was a local crew, language wasn’t a problem, and porters felt very comfortable. We were casual with filming. One of the techniques the camera people use is to sometimes film when people are not aware.

TNS: How do Pakistan’s porters compare with those of Nepal? The Nepalese are very highly paid.

IL: Nepali sherpas have a big reputation because they are trained, whereas, here, in Pakistan, the tourism industry is still very young. Also, Pakistani sherpas go entirely without oxygen, whereas the Nepalis go with oxygen supply.

TNS: How did the Punjab government get involved in this project?

IL: The idea of a mountain film festival was proposed to the Punjab government, and they have been very supportive.  I think it’s a great thing that the festival has the intention of becoming a travelling festival, to engage the entire country -- Karachi, Gilgit, Islamabad.

TNS: Do you think being on the edge of survival brings out the humanity in people or does it make human beings more selfish? And is this sense of sacrifice particular to mostly the porters?

IL: The Pakistani porters are still not so ‘globalised’. So, they are really pure, genuine and innocent. They have this humanity that many countries have lost. Like one of the Brazilian mountaineers mentioned in the film that [when] he was tired, one of the porters offered to carry his backpack on top of the 40kg of weight he was already carrying. And, he says, this made him see these porters with a very different eye.

Even in things like eating; they will have such little food, but they are so willing to share even that. They have genuine kindness. We went to their homes and they had biscuits and chai for us, which is a lot from their meagre incomes. They give even what they don’t have. Somehow the generosity is also amongst themselves, no child is dying of hunger, somebody is always helping. This country has a very strong family structure.

In general, Pakistanis are very generous and hospitable. Strangers that you’ve met for the first time will say ‘oh come to my home’. This natural generosity is so delightful.

Another thing is that Pakistan is not yet a hyper-capitalist country. Hyper-capitalist societies are so much about ‘my milk, my water’. Here, everybody shares. So, I think that’s what brings me to this country over and over again. But at the same time, people’s kindness shouldn’t be abused.

There is a long way to go. There are many challenges for this country. It’s a process with baby steps.

TNS: Were there any surprises during the experience?

IL: Every day was a surprise. Falling in a crevice and being saved only by my backpack! My sister fell into a running glacier. She was able to stop when she held on to a rock. Then there was the high altitude sickness.

The camera people were always hiding from me. They said we are so drained. There is certain strength of mind you have to have for this terrain.

TNS: What other projects are you currently working on?

IL: I have a foundation called Cultures of Resistance. We have a three-pronged approach -- to film for awareness, support with education, and change through activism.

I’m a Brazilian with a Middle-Eastern heart! I have spent most of my life in Brazil and in the Middle-East. The purpose of my work is to promote peace, justice and anti-war activism. My projects are very political. I’m currently working on a film about the occupation of Western Sahara by Morocco. These are indigenous desert people who have lived here for centuries, with their own language and culture, and they want to be able to vote for their own destiny. The UN has announced a referendum for their self-determination, but nothing is being done for them on the ground. The film is called Life is Waiting, waiting in other words for the referendum that never came. I have shot other films on [this] issue, in Congo, Somalia, Afghanistan, Kashmir, and Palestine.

I’m also doing some work in support of the Pakistani porters association, called Khurpa, by giving training, teaching safety measures to porters, health issues, how to work together with more dignity, to raise fees a bit -- just how to move forward. And, education for their children because at the end of the day you can only defend yourself if you have education.

The porters are pure and innocent, they don’t even demand anything if something happens to them. We need legislation to get them to be treated with respect. There is very little that trickles down to those who do the hardest work. A systemic change is needed.

This film is just one element to get this forward. The idea is to not just preach to the converted, but open new doors.

So I’m very honoured to be a part of this historical moment. And I am hoping for more such festivals in future.

"They walk as if they carry feathers on their back"