Evolution of the Jamaat

Analysts fear JI under Sirajul Haq might merge into PTI 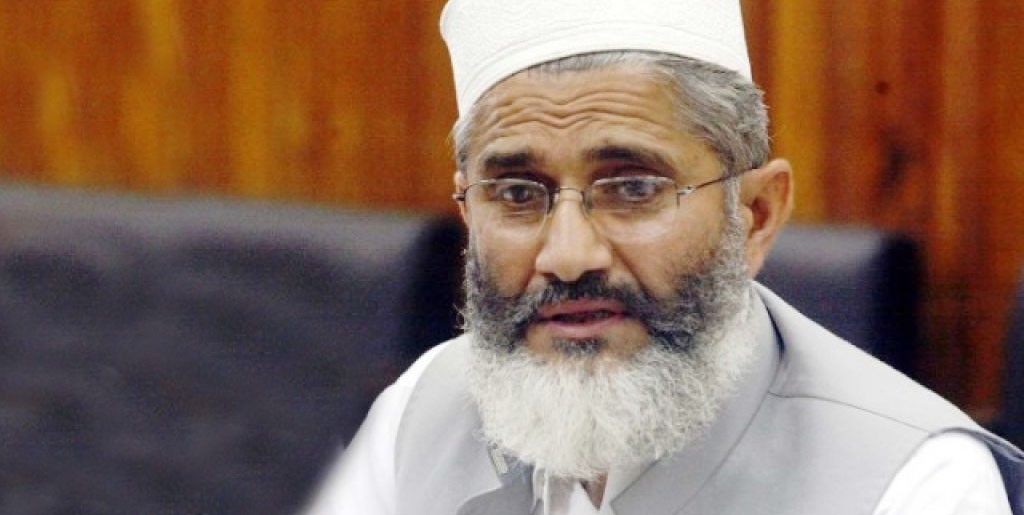 The Jamaat-e-Islami (JI) has been working to evolve itself into a mainstream political party and its current head Sirajul Haq has followed the style of late Qazi Hussain Ahmed. However, analysts believe Haq is facing difficulties internally in his ‘damage control’ mission.

Belonging to district Lower Dir of Khyber Pakhtunkhwa province, Haq was elected chief of the Jamaat in March, 2014, replacing the outgoing chief Syed Munawar Hasan. Iftikhar Firdous, a senior Peshawar-based journalist, says that re-emergence of the JI’s chief from Khyber Pakhtunkhwa province under the current geo-political scenario shows the party’s focus on electoral politics and its keen eye on developments in Afghanistan.

Also, the JI has now started concentrating on other fronts. "The party’s new focus is on youth, women, non-Muslim communities, social media and charity work, and it is struggling to revamp its work on the diplomatic front," says Mohammed Ibrahim Qazi, a Lahore-based political analyst and grandson of Qazi Hussain Ahmed.

Currently, the party has 40,000 members (rukn) and, unlike other mainstream parties, its membership is not open to all. Ibrahim Qazi says the party has been working for expansion of its cadre. The party has recently started to recruit non-Muslims and, for the first time in the party’s history, in November last year members of other faiths were invited to attend its annual three-day congregation (ijtima) in Lahore. Also, the chief Sirajul Haq has been planning to visit Afghanistan in the coming months, on the invitation of Afghan government. It would be the first visit of the JI’s central head to the neighbouring country after a gap of nineteen years.

Background interviews with the JI leaders also suggest that at lower levels, such as district and tehsil, the party leaders are old guards who are reluctant to offer new membership without the party’s traditional process. The party now seems interested in bringing young leaders on grassroots positions to make the party a street-level party and expand it beyond its "educated middle-class" base.

Munawwar Hasan’s ‘aggressive’ style of politics and worsening of relations with the military, party’s links with jihadi groups, failed experience of electoral alliances and presence of various schools of thoughts within the party are key challenges that Sirajul Haq has been trying to resolve.

Sartaj Khan, a Karachi-based political analyst who has closely studied the JI’s politics, is of the view that Munawwar Hasan was the most militant chief of the JI ever appointed to date. "The damage to the JI had already been done before Hasan took over from Qazi Hussain Ahmed. In the last phase of Qazi Hussain, the JI was unable to muster support in electoral or jihadi camps," says Khan, adding that Hasan tried his best in this regard, but failed because of a number of reasons, especially opposition from the military establishment. "He had to go after heading the party for a very brief period compared to his predecessors."

Read also: The ameer and his party

The Jamaat leaders admit the party was under pressure to ask Hasan to withdraw his controversial remarks of ‘shaheed’ for the TTP slain leader Hakimullah Mehsud as the party could not resist severe criticism it received from all quarters -- political or military.

However, the JI leaders and analysts say that Sirajul Haq has successfully kept his distance from militant groups and avoided unnecessary and controversial statements. A JI leader in Karachi, requesting anonymity, says that ‘militants’ problem within the party appeared during Hasan’s tenure when a number of members of the Islami Jamiat-e-Talaba (IJT), the student wing of the Jamaat, joined the militant groups after disagreement with the party leadership over the ideology of jihad.

"Many former party activists in Karachi associated with jihadist groups have gone missing. We don’t know whether they have been killed fighting in the tribal areas or picked up by the intelligence agencies," he maintains. However, the JI leadership has now ‘zero-tolerance’ policy towards the cadre joining the militants, he claims.

A number of critics of the party express their concerns over the JI-PTI alliance and say that the JI’s policies of making alliances with other parties, especially the PTI, had badly damaged the party’s popularity.

"The JI has become B-team of the PTI. It seems tomorrow the JI will merge in the PTI as the Tehreek-e-Ahrar had merged in Muslim League after consecutive electoral defeats in 1935 and 1946," comments Dr Javed Akbar Ansari, a Karachi-based intellectual and economist in his essay. Similarly, Maulana Khalilur Rehman Chishti, another scholar, writes that a number of the Jamaat members, especially associated with Shahab-e-Milli and Pasban, are now part of the PTI.

Firdous is also of same view. "The PTI Chief Imran Khan had said that his party is closer to the JI ideologically than any other political party in the country and therefore the former easily got the JI’s support," he says.

A section of analysts also think there are three powerful groups within the party which have their own priorities. According to Sartaj Khan, the JI politics clearly indicates three broad groups: Karachi, Punjab and Dir.

"Despite the wishes of Haq, the Karachi group was able to block the electoral alliance with the PTI in NA 246 by-polls. Punjab group is more sympathetic towards the PML-N. Haq, who was elected from Dir, has been in favour to form an alliance with the PTI and become part of provincial government," Khan argues. He maintains that despite his struggle to win a place amongst the downtrodden masses, the JI under Haq is in hot waters and unable to have any impact on the masses.

Evolution of the Jamaat