The Khan and his party 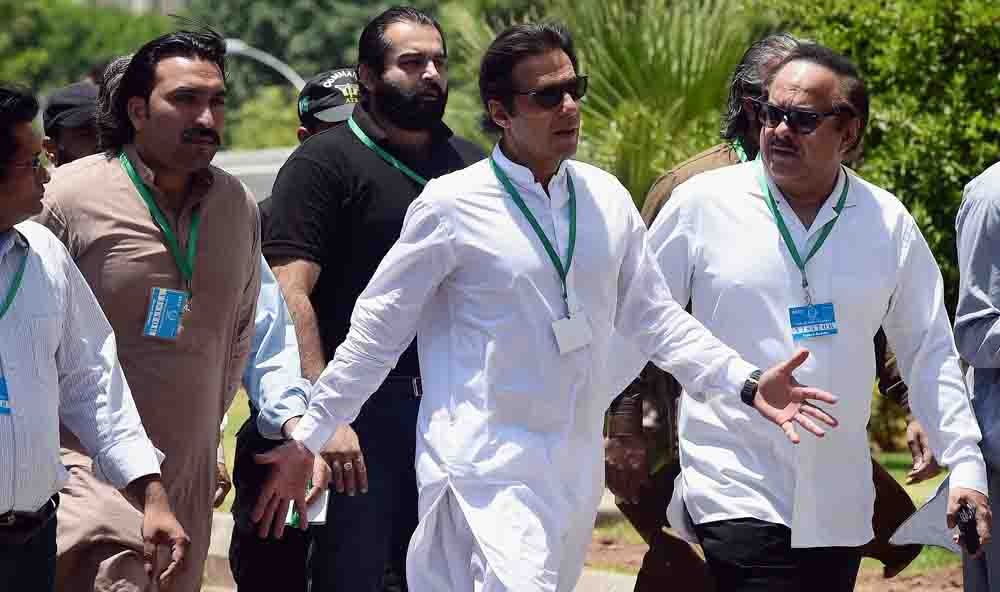 After the recent results of the by-elections in District Mandi Bahauddin and the general elections in Gilgit Baltistan, it can be said without a doubt that lady luck is again siding with Nawaz Sharif. Imran Khan and the PTI, on the other hand, are seemingly on a very slippery slope and, after the local bodies elections in Khyber Pakhtunkhwa, desperately trying to find a foothold.

The whole political scenario has turned a full circle from last August when it seemed that the government was in really hot waters. Imran Khan was the popular leader and seemingly pretty sure of himself. But now Imran Khan is visibly upset and his body language and demeanour exhibits his frustration. It is not hard to analyse the rise and fall of the mighty Khan and his party in less than a year.

To begin with the most glaring mistake that Imran Khan made was to claim that he was out to get the resignation of Nawaz Sharif on the allegations of organised rigging of the 2013 general elections. The PTI chairman and the whole party seemed euphoric on the belief that Nawaz Sharif will not only resign but the whole government and the entire parliament would collapse due to the sit-in staged in Islamabad. But he did not foresee the fact that the elections were technically held by the Election Commission and not by Nawaz or Shahbaz Sharif so even if they did, in some way, rigged some results of the elections, it would not be easy to prove that beyond considerable doubt without concrete evidence.

Nawaz Sharif was not even holding any government office prior to the elections and he was neither a member of parliament. Even if some of the stories of rigging were true, all Imran Khan had was anecdotal evidence. Somebody has seen or heard something which was then conveyed to someone else and the PTI chairman thought that the Chinese whisper would be enough to topple an elected government.

It is one thing to deliver charged speeches in front of fans and party workers and it is quite another to stand in front of a panel of the honourable judges of the Supreme Court presiding the judicial commission and give evidence and testimony. The result has been less than desirable for Khan. In the inquiry, he could not come up with any hard evidence of the organised rigging.

There were much bigger issues in KPK -- of IDPs who needed help, the campaign for eradication of polio, the law and order situation, the natural disasters and uplift of the entire social and economic fabric of the province.

The third and glaring mistake was the continuous dropping of hints about his "invisible supporters’ who were referred to as the third umpire by him and in the cricket lingo he used he claimed they were about to raise their finger indicating that the man on the crease was out. He was so confident of the intervention of this third umpire that sometimes he could barely contain his excitement and urgency for their intervention. Well not to state the obvious here, there was no third umpire and it was childish to assume that any military commander in his right mind would stage a ridiculously orchestrated coup on the wishes of Khan especially when the case against General Musharraf was still in the courts.

The sit-in delivered nothing and the resignations of the PTI parliamentarians were not accepted by the NA Speaker. It would have been far more effective if the PTI had bitten only as much as it could chew. The bite they took was too big to swallow and had to be spewed out.

Whatever the case, the real test of the PTI was after the sit-in ended. The situation needed careful planning and the strategy for the next phase had to be carefully redrafted but there seems to be no policy or strategy of the PTI regarding its re-entry in the parliament in a very delicate national crisis situation.

In the post-Zarb-e-Azb operation situation, Imran Khan had a golden opportunity to emerge as a statesman. If he had the vision for his political future and the future of his party, that was the time to rise above and beyond the local politics and the election rigging issue.

There were much bigger issues in KPK -- of IDPs who needed help and protection, the campaign for eradication of polio, the massive law and order situation threatening the people of the province his party was ruling, the natural disasters making life miserable for the people and the general development of the entire social and economic fabric of the province. KPK was crying for his attention, it needed his leadership in times of sorrow but he was nowhere to be seen.

As a statesman he should have talked about his country, its future, its next generation and about all the geo-political problems facing the region. Imran Khan could have turned his attention towards the issue of climate change especially in the mountain regions of KPK affecting the lives, livelihoods and habitat of the entire mountain communities. He could have used his international stature to bring as much help from all the international agencies working in this thematic area to make strategic plans on how to reduce the vulnerabilities of his region and its population. And there are so many similar global issues in local context which needed his attention.

But all he talked about was the boxes, bags and counting of the votes in a few constituencies. The results of the local government elections prove that people are disappointed. The party is not only losing its popularity and grip but also that there is now a new political alliance emerging against them.

Another matter, which although was not critical but looked upon as a factor in reducing his popularity, was Imran Khan’s untimely wedding and its glamourous photo shoot soon after the Peshawar tragedy.

Then there were question marks raised on the transparency of the funds collected and spent during the entire sit-in and the allegations of nepotism. There are dissenting voices within the party which are hushed and there are issues which are brushed under the carpet.

The PTI has been supported enormously by its overseas Pakistani members who have come to take part in all the political activities paying a heavy price, neglecting their businesses, raising funds, living in Pakistan at considerable costs and supporting the party in every conceivable way, but the PTI has not been able to appreciate the huge contribution of their overseas Pakistani workers. They are largely ignored in the party politics, planning as well as decision-making.

The Khan and his party