A market for media

A book that aspires for journalism unbiased by monetary enticements, racial, social, or religious prejudices, or government interest 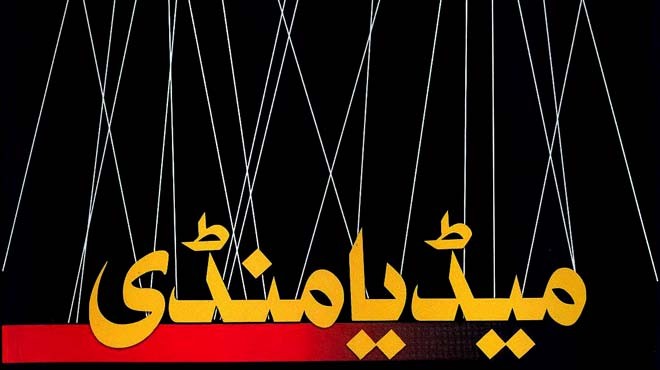 The title itself of Akmal Shahzad Ghumman’s book Media Mandi is quite intriguing. Dishing out the known, not-so-known and unknown facts about Pakistan’s media, media moguls and business magnates who run it, the book could not have come at a more interesting time. The country or, more so, its media is grappling with a fake degrees scandal. The saga involves a group which having decided to set up a television network had lured big shots and unsuspecting producers and technicians of several outlets into jumping ship, and so damaging them in a big way. But now, courtesy an investigative story by The New York Times on the scam involving the group, it is faced with a plethora of cases and a hostile media avenging its harm.

This new crisis is gaining foothold when the Pakistani media has barely come out of a previous one. In April last year, Hamid Mir, a famous face on the country’s most watched television channel Geo, inadvertently triggered a crisis when he was critically injured by gunmen who opened fire on his car in Karachi. Accusations against some sleuths led to a crackdown against the channel leading it to face its worst financial crisis.

The deep animosity of other media groups towards the Geo-Jang media conglomerate bitterly divided the media with Geo being branded as an ‘anti-state’ and ‘blasphemous’ channel. The divisions in the media ranks did not augur well for the hard-won freedom the media had gained.

Perhaps the greatest hindrance to the development of a credible media in Pakistan is that most outlets do not subscribe to journalism ethics but want others to follow them.

Ghumman, writing both for common readers and journalism students, uses an interrogative, myth-busting style to focus his readers’ attention on practical issues of the day. He addresses not only journalistic ethics in terms of the duties inherent in the profession but also the decisions journalists make. Immersed in discussions over journalistic integrity, he aspires for journalism unbiased by monetary enticements, racial, social, or religious prejudices, or government interest. Interviewing media owners and journalists-turned-owners and columnists, he lays bare the shortfalls of their conception of the ethical ideal.

The narrative traverses a wide variety of the media, from the English-language to Urdu-language and regional languages media in Sindh, Balochistan, Khyber Pakhtunkhwa, Punjab, southern Punjab and Gilgit-Baltistan, bringing out similarities and discovering unsettling similarities. With several myths likely to be busted, this book will make readers think in new ways and question many of their old assumptions. The book makes use of traditional principles -- seek the truth, act independently, and be accountable. The author breaks new ground and so the book is likely to prove controversial and thought-provoking.

What makes the book more than a mere rehash of familiar issues is its disciplined, cogent analysis of what does and does not constitute media freedom. Although this meticulously detailed and documented study centres on the past and present of media groups, it also discusses outsized egos of media businesspersons, media influence on government policy-making in ‘public interest’, and the often biased perspective presented to audiences. It highlights the internecine conflict within and between media organisations, and the sometimes supportive, sometimes repressive relationship with governments.

A scathing critique of the media industry, the book also revisits several controversies dusting off previous books and articles. With its simple language, despite the author being a short story writer, the book is unusually fine-grained in its arguments and detail, reflecting the extensive research the writer has conducted. Media businesses, he contends, commonly pride themselves on "sham" attributes.

At times and especially when he’s talking about columnists, the author sounds a little angry. But he’s just a little intense, perhaps a little peeved, that he has to tell us all of this in the first place. He doesn’t contest that some media houses or media-persons have achieved success. Rather, he’s dismayed that so many have lost sight of the basic tenets of good journalism and have fallen for opportunism and populism.

So is the media doomed? For all its censure, Media Mandi is not a gloomy book. One must ask the writer if the Axact episode merits inclusion in the book’s next edition.

A market for media