If your heart beats for Bollywood, Dil Dhadakne Do! 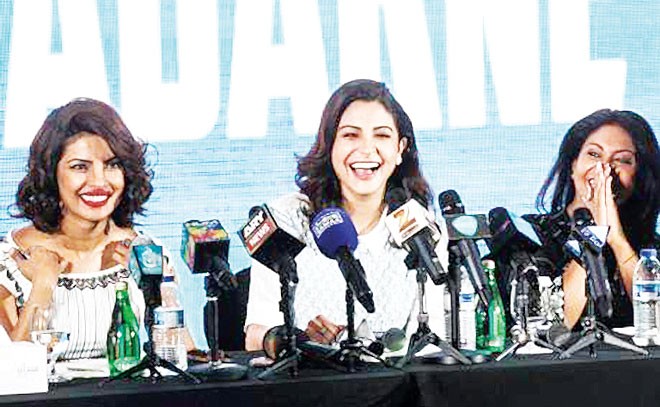 "Priyanka is hotter than the weather in Dubai. She’s hotter than the tropics," Anil Kapoor teased, referring to one of Priyanka Chopra’s pop songs. He candidly added, in characteristic sauciness: "70 per cent of India’s good looks is right here, ladies and gentlemen." It was unclear whether he meant just himself or the entire team, to which Ranveer Singh stepped in and pointed to Anil and said, "Yes, he means himself and we are the remaining 30 per cent!" Providing some interesting trivia to the film, Ranveer also informed fans that ‘ Gallan Goriyan’ was a one-take song, recorded without a single cut. The song needed natural light and they would only get that for 45 minutes before the sunset on the cruise; finally on the 12th day it was shot successfully in one go.

One also saw Priyanka Chopra scribbling away on a scrap of paper, which Anushkha Sharma picked up and displayed to the entire audience saying "as if her other talents were not enough, she has also started to graffiti now!" In short there was a lot of energy, glamour and fun in the room, which hosted the Dil Dhadakne Do cast and crew to a press meet in Dubai.

Dil Dhadakne Do, Zoya Akhtar’s third film, is about a dysfunctional Punjabi family – the Mehras – who take a group of friends on a cruise through Europe to mark their wedding anniversary.

Much to the delight of fans, the entire team of Dil Dhadakne Do was in Dubai to promote the film and share interesting details of their cruise with the media. They were also there to support the 1st Arab Indo Bollywood Awards (Aiba) at Meydan where Priyanka Chopra was one of the performers, along with Salman Khan and Varun Dhawan.

Instep chatted with the cast, getting some interesting insight into their quirky characters…

The last time we saw you in grey hair was 25 years ago in Lamhe. You have perhaps been Bollywood’s best bet over the years. Can you share your view on how you find the cinema and the movies today?

Anil Kapoor: "As far as the look is concerned, this salt-and-pepper hair is just to secure my career for the next 10 years, so the offers keep coming. I think there is a lot more competition as well as professionalism now. Everybody around you is so damn good. The reason I like to work in multi-star cast films is that you get to learn a lot with so many artists around you. Not only Karma, I did Lajja, Race and Shootout at Wadala, all of them are multi-star casts. It’s a great learning experience. And as far as the cinema today is concerned, the fact that we are doing a press conference in Dubai and London tells so much about how our cinema has touched the international shores. It’s beyond imagination."

You have been extremely selective about the movies you chose to be part of. What made you say yes to this one?

Shefali Shah: "I found the character of Neelam Mehra really interesting. She is wicked, loud, sophisticated and emotional, all at once. Once you see the film you will find this character very real; there’s no drama in the way she talks to her kids. You will feel as if your own mother is talking to you." Shah went on to say that what really hit home was the script; she felt it was one of the best scripts she had ever read, in a very long time as it was funny and wicked.

Do you think families today are really dysfunctional?

Ranveer Singh: "To an extent yes, I feel we humans are a collection of different emotions. We need our space, our emotional pillows. Whenever someone tries to take these things away we lose control on ourselves and start behaving rebellious. As much as it’s believed that it’s the children’s responsibility to understand their parents’ point of view, it is equally important for parents to step in their shoes and try to understand their feelings. This equation has been beautifully presented in the film."

Given the fact that you have always had a lead role in films was there a moment when you felt insecure about sharing screen space with so many actors?

Anushka Sharma: "I don’t think any actor who stars in Zoya’s film will have to worry about who gets more screen space or not. When you accept a film written and directed by Zoya, you know you’re in good hands. Check movies like Zindagi Na Milegi Dobara; there were six characters in that film as well yet we remember all of them. Plus, I had so much fun and the entire experience of shooting is memorable. You see PC and me having a great time in the song ‘Girls like to Swing’."

Tell us something about your role and how easy it was to switch your chemistry with Ranveer, as you both play siblings, whereas in Gunday and in the upcoming Bajirao Mastani you play his love interest?

Priyanka Chopra: "Ayesha Mehra is a very confused character. She has no idea what she’s doing. She’s always changing her mind. She is so confused and does not have any opinion about love. She just wants to be loved. It was refreshing because after a long time I am playing a feminine, sedate character who’s not trying to beat up boys. And playing Ranveer’s sister wasn’t very difficult because I don’t take any character beyond the set. Once it’s a ‘cut’ it’s out of my mind as well."

If your heart beats for Bollywood, Dil Dhadakne Do!