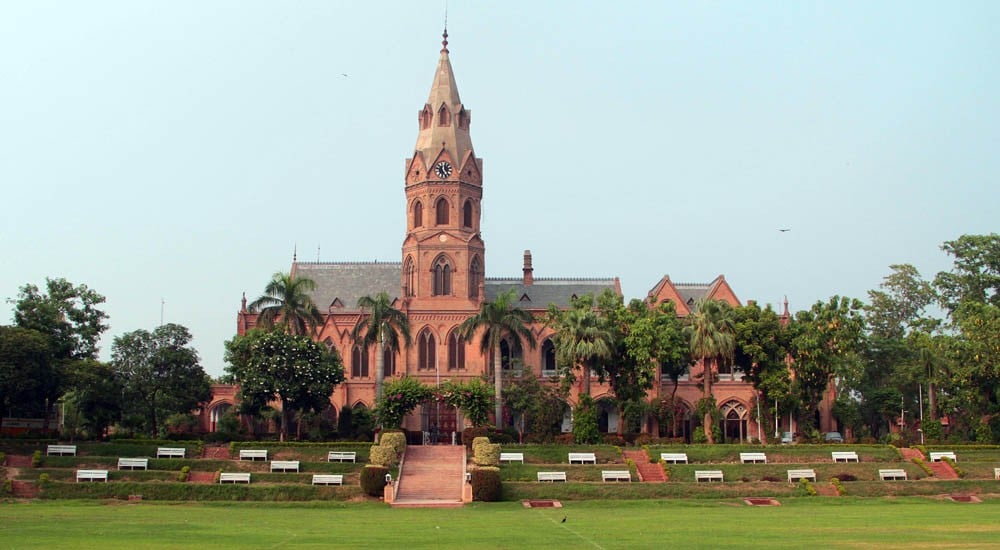 As I sat on the main deck of SS Varela, on my way from Bombay to Lahore, my teenage thoughts were naturally focused on the new country -- and the new city, Lahore. I had picked up much about the Quaid and the idea of Pakistan from my elders and through the lively columns of The Times of India and The Bombay Chronicle. As the day of Partition drew near, the Muslim community of Bombay was caught in a surge of excitement. Thousands of League flags fluttered in the breeze in the Muslim enclave around Muhammad Ali Road and Crawford Market. My father, who was a Railways employee and posted at the Victoria Terminus in Bombay, had opted to serve in the new state of Pakistan. That is how I found myself in Lahore at the age of seventeen.

I had the honour of being admitted to the Government College (GC) in 1948 by Principal Ahmed Shah Bokhari, known in the annals of literature as Patras Bokhari. When I entered the portals of this magnificent edifice for the first time, I stood in awe of its massive Gothic structure, huge columns, pointed arches and, of course, its lofty clock tower. Little did I know at the time that I would spend the best part of my life pacing through its dim corridors, spacious verandahs, stately lawns and in treading the silvery slope leading to the renowned seat of higher learning.

When Professor Ahmed Shah Bokhari took over as Principal of GC in 1947, the city of Lahore was in the grip of communal violence. With the migration of non-Muslim professors, the teaching staff of the college was reduced to a dozen or so. The student population had dwindled to nearly 100. Professor Bokhari faced an uphill task. By 1948 -- the year I joined -- the figure rose to 600.

I had the honour of studying in GC for six years, teaching in GC for 34 years, serving as Vice Principal for seven years and retiring from GC in 1991.

My student years at GC were instructive and illuminating. I became aware of the glorious past of this time-honoured institution, its distinct culture and traditions and its rich array of extra-curricular pursuits.

In the fifties and the sixties, Government College had a battery of brilliant foreign qualified teachers. This was one feature of the college’s academic life that was very heartening.

My under graduate years, for the most part, followed a set traditional pattern. I had frequent opportunities of witnessing some very lively inter-collegiate debates and listening to accomplished speakers like Ehsan-ul-Haq and Ansar Hussain. I also had the good fortune of being taught by some of the finest teachers of the time like Professors Fazal Ahmed Awan, Syed Ghulam Raza, Abdul Hamid, Fayyazuddin, Ashfaq Ali Khan and K.K. Aziz. However, the two years (1955-57) that I spent as a student of MA (English) proved to be truly rewarding.

These were years of political turmoil. Iskander Mirza, Ayub Khan, the 1956 Constitution, Suhrawardy and Feroz Khan Noon were making headlines. One could sense that events were fast hurtling towards martial law.

If I remember correctly, some fifteen of us were admitted to the 5th year by Professor Khwaja Manzoor Hosain, Chairman of the Department of English Language & Literature.

Khwaja Manzoor Hosain was a man of few words and had a deep regard for orderly procedures. A disciplinarian to the core, he was intolerant of laxities. He was also a distinguished scholar of Urdu literature with a pronounced flair for the poetry of Mirza Asadullah Khan Ghalib.

Khwaja sahib held his classes in an old musty room to the rear of the main library. He was known for his profundity and erudition. He taught us Edmund Spenser’s The Faerie Queene -- a sixteenth century classic. We prized his deep insights and analyses but were hard put to keep pace with his fast flowing comments and jot down every word he uttered.

In contrast with his gravitas in the classroom, Khwaja sahib felt more relaxed in the seminar sessions and explained obscure passages with patience, warmth and clarity. Our seminar groups did not exceed two or three students. Miss Parveen Majid, the only young lady in the class, and I were in Khwaja sahib’s group.

Khwaja Manzoor was a hard taskmaster. He had evolved the criteria for judging a student’s ability. If the student failed to come up to the required level, he did not spare him. Promotion Tests, I remember, were held at the end of the term. Eleven of us made it to the 6th year but four could not.

Khwaja sahib granted them no concession. The four had no choice but to leave. These luckless souls went forth and joined other disciplines elsewhere and topped the lists in their chosen fields. Fateh Muhammad, for example, stood first in Economics and Hasan Nawaz Gardezi in Sociology. They were not so very luckless after all!

Our other distinguished teacher was Prof. Sirajuddin. A prominent old boy of the college with a bright academic record, he was the Principal of GC at the time. In 1950, The Ravi spoke of him thus: "Considered to be one of the best teachers of English Literature in the country, Mr Sirajuddin has built for himself a secure niche in the hearts of his students and admirers. The author of many books and anthologies, a discriminating critic of painting, music -- in fact, of all fine arts -- he brings his variegated experience to bear upon the task of guiding the alma mater."

Despite his heavy responsibilities as head of the institution, it was exceedingly gracious of him to teach us Shakespeare’s Macbeth. One could not fail to notice the glow on his face and the fervour in his voice when he came to explain the significance of certain critical moments in the play like the knocking at the gate or the appearance of Banquo’s ghost or Lady Macbeth’s growing insanity. His lively lectures were, indeed, riveting.

Both Professors Siraj and Khwaja Manzoor had great affection for the college. I cite two examples that not only reveal their feelings for the college but also their firm faith in the ideals of the institution:

1. Two sentences from the letter that Khwaja sahib wrote to the Punjab University authorities: "We, of this college, seek no new privileges. All we seek for is to be left unhampered to cultivate our own garden and to resist intrusive pressure hostile to or incompatible with the functions or pursuits for which we exist."

2. A passage from Prof Sirajuddin’s Report: "Each of us has, within his heart, an ideal pattern of virtue, goodness or beauty. When I speak of the college, I speak therefore not merely of this college as it once was or now is but as it might be in the platonic realm of ideas. Both tradition and change are the indispensible cornerstones of an edifice which is designed to outlast our brief span of life. It is good to abide by tradition but it is better still not to be incapacitated by it. We live in the three-dimensional world of the past, the present and the possible or, if you will, in the world of the real, the realising and the realisable. I would like the college of my Utopia to bring into being active, disciplined, creative personalities: a sufficient number of responsible, free, self-directing young men and women who exercise initiative, choice, discrimination and self-control in a spirit of humility, reverence.

The quintessence of GC’s greatness lies in the high calibre of its teachers. In the fifties and the sixties, GC had a battery of brilliant foreign qualified teachers. This was one feature of the college’s academic life that was very heartening. It added immensely to the prestige of the institution as a distinguished seat of higher learning.

Sixty years have flown since I walked the corridors of my alma mater but the memory of those splendid years has not faded. I can still picture in my mind’s eye the serene beauty of the Rose Garden and the Loggia, the Oval and the Scholar’s Garden, the radiance of the sunlit lawns, the buoyant cheerfulness of sports lovers, the clashing of verbal swords in heated debates, the thrill of musical soirees, the resounding words of thespians in the hall, et al.

Towering above all these memorable images of institutional culture, there was the lasting impact of a transformative academic experience that subsequently led to a deeper understanding of human values and the complexities of the world.

The study of drama and poetry did not minister to the acquisitive instinct or the job market but it certainly kindled an intellectual curiosity that opened up a fascinating world of the humanities.

Frank Bruni, an American columnist, recalls how Anne Hall, his teacher would expound on "Othello’s corrosive jealousy, present Lady Macbeth as the dark ambassador of guilt’s insidious stamina and show us that we could find in Shakespeare just about all of human life and human wisdom."

Prof Sirajuddin and Prof Manzoor Hosain were the finest teachers of drama and poetry respectively in the GC of the fifties. Listening to them was an inspirational experience: these scholarly wizards not only offered new insight but also conveyed a portion of their faith and fire.