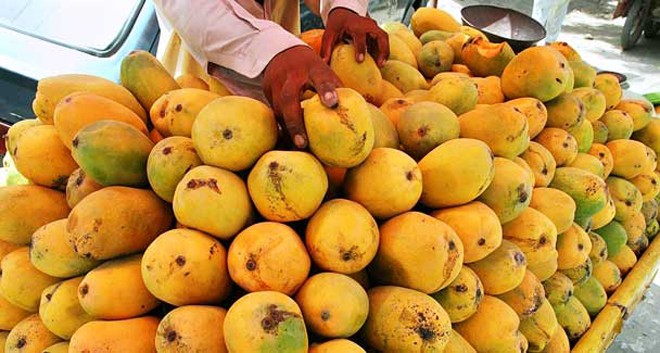 Because of its excellent flavour, attractive fragrance, beautiful shades of colour, delicious taste and healthful value, Pakistani mango is recognised as one of the best of its kind in the world market. With a production of 1.8 million tonnes per year, Pakistan is among the leading mango producers and is considered the original and natural habitat of mangoes. Punjab has the major share of mango production with 64 per cent whereas Sindh produces 35 per cent and KPK produces one per cent of the fruit.

Pakistani mangoes are high in fibre, low in calories and contain a small amount of carbohydrates, calcium, iron, potassium and a little protein. They are rich in vitamins A, B and C and also contain other antioxidant vitamins. There are a number of varieties of this fruit including Sindhri, Langra, Dusehri, Anwar Rataul, Gulab Khas, Sunera, Chaunsa, Black Chaunsa, White Chaunsa, Began Phali, Fajri etc. All of these diverse varieties have distinctive colours, aromas and tastes.

It has been observed that in the past few years the production of quality mangoes is on the decrease. Pakistan was expected to produce around 1.8 million tonnes of mangoes this year. The crop faced huge losses due to abnormal weather events and changing weather patterns in upper Punjab.

According to a report, mangoes production has faced an overall reduction of 35 per cent with 10-15 per cent in Sindh and 40 per cent, 50 per cent and 60 per cent in Rahim Yar Khan, Muzaffargarh and Multan respectively. Experts cite long winter season and abnormal rains in February and March as major reasons for the loss in production.

Although Pakistan is among the top countries to produce quality mangoes, four to five per cent of total production is exported. Last year Pakistan exported 90,714 tonnes of mangoes worth $48 million and this year the government is expecting to export 120,000 tonnes, which is 30 per cent higher than the previous year and a revenue of $60 million is expected from this export. This increased revenue is expected because some measures have been taken to enhance the quality of the fruit and it has resulted in gaining good price i.e. $400-500 per metric tonne as compared to the previous year’s $250-300.

Although Pakistan is among the top countries to produce quality mangoes, four to five per cent of total production is exported. Last year Pakistan exported 90,714 tonnes of mangoes worth $48 million and this year the government is expecting to export 120,000 tonnes, which is 30 per cent higher.

"Around 3,000 tonnes of mangoes have been exported to earn $1.25 million since the start of export season on May 20," says Waheed Ahmed, Chairman Research and Development, All Pakistan Fruit and Vegetable Exporters, Importers and Merchant Association’s (PFVA). "Mangoes are being exported to Saudi Arabia, the United Arab Emirates (UAE), Iran, Afghanistan, CIS countries and Oman, among others." Waheed was hopeful that the export target set by the government will be achieved easily as both the rate and quantity are satisfactory.

He attributes improved earnings to the steps taken by the government of imposing ban on use of wooden boxes for fruit and vegetable exports and use of good agriculture practices. "Wooden boxes were not only responsible for 10-15 per cent damage to the fruit but there was also a danger of carrying pests and diseases. That was why we were unable to get good rates for our commodity in the international market," Chairman PFVA explains.

Availability of more hot water treatment plants in the country has a major role in rising export to the valued markets, especially European markets. A senior official from Agro Food Division, Trade Development Authority tells TNS that the number of hot water treatment plants has increased to 29 in 2015 from three last year. "We have established a number of hot water treatment facilities for mangoes to ensure pest-free export," says the official. "These plants have the capacity to treat 2,000 to 2,500 tonnes of mangoes per day." The official reveals that a delegation from Iran Quatrain Department is in Pakistan nowadays. "Several tasks have been completed regarding increase of export to Iran and in future Iran is going to be a big market for Pakistani mangoes."

However the officials of Trade Development Authority are silent on the issue of $2.8 million Vapour Heat Treatment (VHT) plant imported by the Trade Development Authority of Pakistan (TDAP) from Japan in August 2013, which reportedly is dumped at the warehouse backyard of Expo Centre Karachi. Fruit exporters had requested the TDAP to assign management and operation of this plant. However, to date their requests have not been responded.

Fruit exporters say that the installation of a commercial VHT plant is crucial for the enhancement of exports. Director General Agro Division Dr Usman Hassan, while contacted regarding the plant issue, said that only chairman can speak on the issue.

Sources in the division tell TNS that three meetings regarding the installation and activation of the plant have been postponed and the fourth is scheduled for June 9. The plant will be operated on public private partnership basis and Agro Food Division has hired a consultant to chalk out the procedure. After determining the cost, private sector will be invited for bidding.

In the absence of this VHT plant, Japanese market will remain closed for Pakistani mangoes. The Japan government has already approved the quality of Pakistani mangoes. But Pakistan is missing that huge market due to the absence of VHT facilities. According to experts, Pakistan can easily export mangoes worth $4-5 million annually if VHT plants are installed to meet the laid down requirements.

Pakistan will face a strict competition from India, one of the world’s largest mango exporters, in tapping the European market. This comes after the EU lifted the ban on Indian mangoes in January this year. Brussels had outlawed Indian mangoes in May 2014 as pests were found in the consignments.