With the passing away of Ustad Allah Rakha Khan, sarangi playing suffers a severe blow 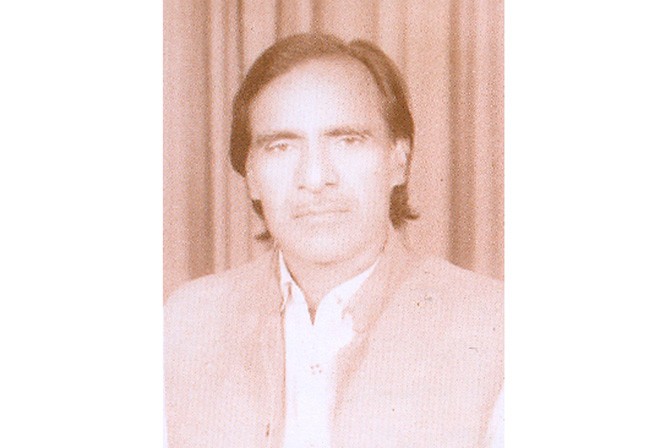 Classical sarangi playing suffered another severe blow with the passing away of Ustad Allah Rakha Khan. It’s more a cause to grieve because the instrument is truly on the verge of extinction in Pakistan. It should not be forgotten that to play the sarangi well is a feat in itself; it requires decades of dedicated application. No wonder very few sarangi players are left, and most are elderly whose best years of being musicians are behind them.

The incentive and the inspiration for the young to join in learning and playing this difficult instrument is lacking; the few young sarangi players, who can be counted on fingers, need the encouragement to persist under very arduous conditions.

Ustad Allah Rakha was born in Muzaffar, a village in Sialkot District, in 1932. During early childhood, his family moved to Amritsar. He acquired his initial education in classical music and sarangi playing from his father, Ustad Lal Din. Later, he became the student of three renowned sarangi players, Ustad Ahmadi Khan, Ustad Allah Diya, and Ustad Nathu Khan.

After the partition, Ustad Allah Rakha Khan migrated to Pakistan and settled temporarily in Karachi. It was there that he met Ustad Bade Ghulam Ali Khan and honed his skills as a sarangi accompanist. He moved to Lahore in 1948, and for almost two decades worked at the Radio Station and in the film industry as a recording artist.

In Lahore, his knowledge of music was further enhanced during his association with Ustad Sardar Khan (vocalist), son of Umrao Khan, and grandson of Tanras Khan. He moved to Rawalpindi in 1968, became a regular employee of Radio Pakistan, Rawalpindi, till his retirement in 1992. In 1994 Ustad Allah Rakha Khan was awarded the Pride of Performance for his lifelong devotion to classical music.

Sarangi entered into the classical arena in the first half of the eighteenth century, generally used as an accompanying instrument instead of bin. Because of its folk origin, it entered into the classical stage through rural musicians. To occupy the status of accompanist was an upgradation for them, compared to just being minstrels. In the later half of the same century, that is the 18th, its association with courtesan life was also well-established.

There is no other instrument on which the strings are stopped with so high a portion of the back of the fingers. Practice often leads to prodigious callusing as well as telltale grooves in the fingernails.

In the later half of the 20th century, sarangi became a solo instrument, especially through the efforts of great musicians like Ram Narayan.

The major influence on Allah Rakha Khan was of one of his ustads Ahmadi Khan who hailed from the prestigious Delhi gharana of tabla players. Born in 1890 in Delhi, he was the younger brother of Khalifa Gami Khan, and was groomed in the intricacies of the pakhawaj and tabla. During his youth, he took a liking to the sarangi and started his training under his maternal uncle Ustad Nazeer, who was the father of another renowned sarangi nawaz Ustad Zahoori Khan.

Following his training, Ahmadi Khan left Delhi and spent a lengthy period in Amritsar and Lahore. He was close to Ustad Bhai Lal Mohammad whilst in Amritsar and lived with him.

Ustad Ahmadi Khan became one of the foremost sarangi players of his era as he achieved great command over his instrument and closely matched the intricacies of the vocalists he accompanied. Apart from his artistic excellence, Ahmadi Khan was a great teacher also. He never kept anything from his disciples. The list of his students is huge which includes such great names as Ustad Nathu Khan, Ustad Allah Rakha and many more. It is said that Pandit Ram Narayan also received some training from him. He passed away in Delhi in 1945. Ustad Ahmadi Khan’s son, the distinguished sitarist Ustad Imdad Hussain Khan, lived in Karachi.

Said to be the most difficult instrument to play, sarangi’s three melody strings are stopped not with the pads of the fingers but with the cuticles or the upper nails or the skin above the nails of the left hand. There is no other instrument on which the strings are stopped with so high a portion of the back of the fingers. Practice often leads to prodigious callusing as well as telltale grooves in the fingernails.

Sarangi-making is also almost dead in Pakistan. Most players play instruments that are between fifty and hundred years old, often inherited from their elders. The instrument’s tone and playability are largely determined by its setting up; the placement of and contouring of the bridges, the thickness and height of the strings, and the fitting of the pegs. These complex skills require a lot of experience. Traditionally they have been passed, like the music, from father, grandfather or uncle to the children of sarangi families but, due to the quickening pace of life, inertia and demoralisation on the part of sarangi players, these skills are gradually being lost.

It is important to bring under the spotlight the great loss that will be suffered if sarangi becomes a museum piece. It is so very quintessentially our own that its demise will mean losing something very peculiar to our culture.